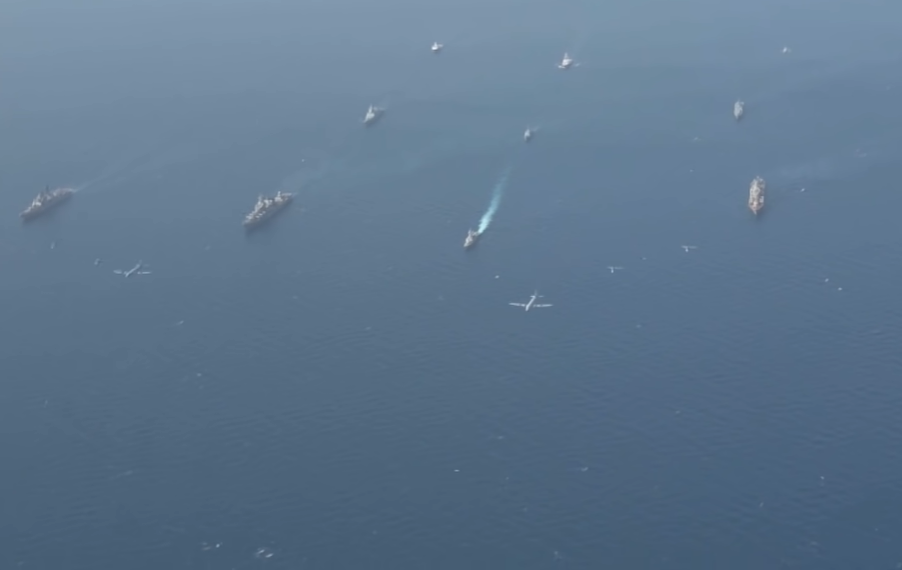 Screen grab from a video of the drills released by the Russian MoD. Via RT.

On February 25, the Russian Ministry of Defense announced that it had concluded drills in the Eastern Mediterranean Sea.

More than 20 vessels of the Russian Navy took part in the large-scale drills which began around ten days earlier. Tu-22M3 strategic bombers and MiG-31K fighter jets armed with Kinzhal hypersonic missiles also participated in the drills. The warplanes were deployed in Hmeimim Air Base on the Syrian coast.

The Russian Ministry of Defense released footage showing a large naval formation of all the vessels that took part in the drills.

The Russian Navy expanded its operations like never before following the beginning of Russian counter-terrorism operations in Syria more than six years ago.

Tartus Naval Base and Hmeimim Air Base on the Syrian coast remain the cornerstone of Russian military presence in the Eastern Mediterranean Sea.

France just pirated a Russian civilian cargo ship. Ru must do something about it. ASAP

https://t.me/voynareal/9012 are these Ukrainians or Russians?

Hard to tell. Could be Donbas militia too. Its a bit strange the IFV is alone by itself. They usually move in columns.

Could be psychological warfare too. Nothing indicates a firefight.

The Russians have a white Z on their vehicles.. And i don’t see this…

My understanding is that Turkey has shut off transit of Russian martial vessels through the Straits. So whatever was already in the Black Sea is all Putin has to work with on Ukraine; these ships may as well commit to anti-terror operations in Syria now.

Corrupt Shithole of Ukropisstan
Reply to  A Fellow

Fake News. Didn’t happen. Even if it did the law allows Russian ships back to their homebase in Sevastopol.

will they ever return to home port…????