Residents of Kremennaya in the Luhansk People’s Republic told the reporters about the murder of the mayor of the town by Ukrainian Nazis.

Vladimir Alekseevich Struk was kidnapped and killed on March 1, 2022. According to local residents, he was killed by the AFU servicemen or members of the Ukrainian military nazi formations because he cared of the local residents, accepted the Russian humanitarian aid, and suggested that local deputies improve relations with Russia and the LPR.

Ukrainian Nazis published a post with a photo of the murdered head of Kremennaya Vladimir Struk. There were obvious signs of torture. 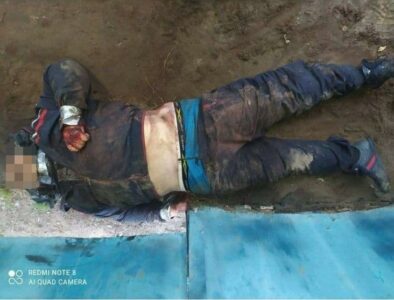 Correspondent: “Is that the Ukrainian military?”

Woman: “It’s not clear who was there, the Ukrainian military or Nazis.”

Man: “They came in wearing masks, pulled him out of the office.”

Woman: “Yes, yes, from the worker’s office they took him away and that’s it!”

Correspondent: “At that time the territory was still controlled by the Ukrainian military?

Woman: “Yes, yes, yes! That is, there were no Russians anywhere yet. This was the end of February, beginning of March.”

Man: “The Russians were only approaching Severodonetsk at that time.”

Woman: “Probably, it was the second of March.”

Man: “That’s how they (note: the Russian military) went around and went into Kremenna from this side, maybe a couple of days were not enough. But they (note: Russian) didn’t go into Kremenna anyway… and anyway they (Ukrainian side) killed him.”

“Is this how you prepare to meet them?” (note: question from Ukrainian military to the mayor).

And he started handing out humanitarian aid from the first day of the war. That is, he had cows, milked those cows, brought milk, chickens were both alive and gutted, and eggs and bread… In short, they got some flour, started baking bread, there was a humanitarian aid, a little bit here and in the city. In other words, it’s just like in the war – “that are rich in, this are glad of”! Well… no one liked it and it was gone. He was such an economical man. Well done! I can’t say anything bad about him. May he rest in peace.”

Well you better be anti russian if you are a ukrainian mayor. I mean the one in mariopol is hating on russia all the time without any consequenzes while everyone who does not hate enough is a dead men.

Russia needs to learn from the west. Those who oppose the west end up dead thats why almost nobody dares to do so.

Funny thing about the Mayor of Mariupol,i don’t know wher he he is but its not Mariupol LOL!!

true, he left the first day and has been barking to foreign media about how russians are eating ukranian babies

They replaced that clown long ago.

All we’ve seen so far is utter savagery from the west and their minions, that we did not think were possible. If the entire west is razed to the ground, I don’t think anyone will shed a tear.

Let’s hope, if it comes to that, that the Russian admin/military use their Glonass system to pick off their targets instead of making us all suffer for the crimes of western criminals.

Spot on. Russian lenient approach since the day 1 was the main mistake in this war. No matter what they do the western degenerates will accuse them of imaginary crimes while ignoring ukro atrocities every day. So f*ck it, just be as brutal as their enemies. Even more preferably.

Everyone who is captured in Azovstal must have their right hand cut off and their eyes pricked out and then released so that they can go like zombies in the ruins.

No, if the russians act brutal with THEIR OWN PEOPLES, then the russians are no better than the puppet regime in kiev at the moment.

We are better than that! We are not barbarians!

THe Guardian
Reply to  Michel LeBlanc

Just take care that your “we are better” is not done in such way, that betray your own interest and hurt your own people. If it betray and hurt then you are more harmful then enemy. For me such approach is sign of betrayal.

That’s how communism and nazism both work: no criticism of government or you’re attacked continually or killed. According to the textbooks and learning we grew up with in America, that behavior is wrong.

It is a spiritual battle, once you give into evil you are theirs. The cult controls all sorts of extremists from Fascist to anti Fascists, from Liberals to religious extremists all belief in violence as a means to an end. The criminals should be charged and prosecuted and if convicted pay the price.

How is this a “spiritual” battle

Hilarious. How’d your American protection of dissidents work out for Martin Luther King, Eugene Debs, Fred Hampton or anyone else who actually addressed the truly vile nataure of the United States of America?

US citizens have a new doctrine. It’s called Exceptionalism, and it is just as nasty as communism and nazism. Assassination used to be the favourite way to power for warmongers and to protect regimes. Russia used to have that problem in its past. Now assassination is an american habit. Nobody is above the law of american assassination, not even presidents.

The U.S is on the verge of civil war, why do you think they’re pushing so hard against Russia?

If the U.S cannot force Russia into submission before things fall apart in the U.S, it’s over for the elites.

If the truth ever comes out, I wonder how many Americans will pour out into the streets demanding the heads of top officials. Most Americans are too far gone or totally apathetic towards their neighbours. Narcissism has taken the place of empathy, they’re totally phucked up and beyond salvation. I hope I’m wrong, I hope there’s enough humanity to spark the fire. I hope Biden will be the catalyst and people will take over and we can all look on with some glee and yeah, Karma has finally arrived.

People will pour out into the streets, that’s what these control freaks want because they have lost control and want to take us all down with them. If they can’t have control, they don’t want anybody else to be in control of anything.

Look at the past those tactics allways come from those trained by the british or the us i guess its part of their manual how to train foreign soldiers or maybe even their own.

Barbarism is taking over Ukraine and soon Eastern Europe. Euro is losing againt US dollar. This is going to end very bad folks! Lets be prepared to what can happen in our countries.

A total nuclear war will be the best solution so that one can get rid of the man-made misery.

That is what you get if you collaborate with Russian fascists.

You are also “free” to shut up. What a pathetic and false comment. Russia defeated fascism and they will do it again. Learn history before you dump in here your dimwit. Your ignorance seems to be inversely proportionate to your IQ.

You don’t have a brain. What do you use to “think” ?? You just remind the readers who is the enemy……

The situation can change faster than you realize and you are designated.

Russia should have started this dance with FOAB right over kiev.

Dumb western taxpayers should feel very proud that their hard earned cash is being spent funding murderers and war criminals in Ukraine. The western people need to take back their gov’t because when the US and its nato poodles no longer need the public cash, they will dispense with the cash cows, wrap them up in a flag, and have them fight to the death in a foreign country.

Gov’t was never your friend. They are rapidly becoming the enemy of humanity itself. They want control of everything for their scams. They will destroy anything they cannot control. That’s US and nato democracy.

You got it all wrong. It is being spent killing murderers and war criminals in Ukraine.

I’m pretty sure a traitor in Russia would have met the same fate, lol.

Pure terrorism this man war murdered to set fear into another public official who dares to challenge the Kiev regime shame on them.