On December 5 morning, a large convoy of the Russian Military Police arrived in the Qamishli airport in northeast Syria.

The convoy was escorted by two helicopters of the Russian Army Aviation and security forces of the Kurdish-led Syrian Democratic Forces (SDF).

Russia deployed several attack helicopters and air-defense systems at the Qamishli airport last month. Recent reports suggest that Moscow may be planning to turn the airport into a full-on base. However, this is yet to be confirmed.

The Russian Military Police have deployed several units in northeast Syria since last October. The units are working to facilitate an agreement between the SDF and Damascus as well as to implement the recent Sochi agreement on the region.

A day earlier, a unit of the Russian Military Police escorted a Syrian air-defense system that was reportedly deployed in northern Raqqa.

BTR 80 is one of my favorites.
8 X 8 and amphibious, I want to take one for a drive in the mountains and across a high lake
And then test fire the 30mm auto cannon on some pine trees.:) 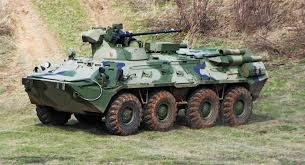 it should be russian and SAA doing patrols, not russia and turkey, SDF always attacks them and throws shit at them