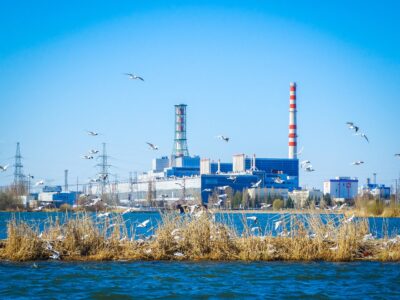 Video reportedly showing the detention of Ukrainian saboteurs by Russian security forces was shared by the Russian media.

According to the local reports, the incident took place on November 14 near the Russian city of Belgorod. Two saboteurs came to Russia under the guise of refugees. the militants were captured on their way to the Kursk region, where they were going to carry out a terrorist attack at the Kursk Nuclear Power Plant.

– How many people were there?
– Two.
– Where did you come from?
– Refugees from Ukraine.
– Where were you going?
– Kursk region.
– What is your goal, why did you go there?
– Blow up a nuclear power plant.

This is not the first attempt of the Kiev regime to carry out a terrorist attack on the Russian NPP. On October 10, Russian President Vladimir Putin claimed that Ukraine has committed at least three terrorist attacks undermining power lines leading to the Kursk Nuclear Power Plant. The Ukrainian media have recently shared fake news that the Kursk NPP is allegedly being used by the Russian military as a warehouse for storing rocket and artillery ammunition. the reports seem to be a pitiful attempt to justify the terrorist warfare of the Kiev regime.

Execute the criminal Nazis then mail them back to Kiev by UPS.

Execute Ze and send parts to london and washington…

Ukronazis are also taking people from the streets of Kherson and shooting them for speaking Russian, including children.

Is this reason enough for Ukraine to be occupied and these insane murderers be hunted down?!

USA is a shithole, EU is becoming one
Reply to  Jack

Russia needs no excuse. And Russia can do the same damage by conventional bombs. 🇷🇺

Jack
Reply to  USA is a shithole, EU is becoming one

but will not send the same MESSAGE with conventional bombs, or break the spirit of UE and UKR

There is no message russia can send at all that would convince the west that it can’t win. They are believing in their sure victory religiosly just as in their racial and moral superiority.

You can really congratulate the west for this sucessfull tactic.

Tell syria is about to use chemical weapons and then let the turks send al quaida to do it.

Tell russia is about to use a dirty bomb and then let the ukrainians prepare one.

Tell russia is about to blow it’s own nuclear powerplant to blame it on ukraine and then let the ukrainians do it.

Tell russia might blow up it’s own pipeline to blame it on the west and then blow it up.

You then after it happened just need to say told you so and the false claim is written in the history books as truth.

exactely :) you must be a FSB agent to figure it out so fast

I am not even russian but good try.

Just an observer of what happens in the world for quite some time now. The US is very successfull at using false pretexts for an invasion and then when no one cares cause the victim is destroyed admit they had “wrong information” like in iraq.

I am not Russia too ,i am Japanese.

I have the same oppinion about USA-NATO as Kotromanic and War. and I´m not russian too ;)

Anyway US and UK have been killing and genocides 6 million of innocent peoples in the Middle East lol.

This is how a counter intel officer should behave: screaming and imposing fear above the terrorist subject. The time of giving them cigarettes, making jokes is over. Russia should start playing hardball, and this officer understood that.

How stupid can the ukrainians be? Is there no powerplant further away.

Blowing up one in Belgorod that is near the border of ukraine is harming their own territory and people. Don’t they have family in ukraine wich will be irradiated as well?

Seems like they do not care as long as it hurts russia and russians.

It is sad to see that the ukrainians seem to have degenerated to the slavic equivalent of ISIS with their attitude (you love life we love death).

Or is that what british and us instructors tell them to do?

and you really belive the russian news that 2 idiots from ukraine were going to blow up a nuclear power plant :) ))) cmon dude, not even intoxicated with a ton of vodka you cant be that stupid to belive this shit

I believe that they are ready to try anything cause they are in “endsieg” mode.

If that particular event is true is of course a question.

Can you write something like a normal person whithout insults or does the handbook tell you this?

who gives a fk about arabs in the middle east? savages…

GOP got the house. Now let’s see if they keep their promise of cutting the billion dollar aid to the Ukranazees

Both the House and the Senate are ruled by same peoples: the khazar fake jews, also know as fajoos (my personal denominative for those sons of a bitches). So, don’t expect anything good from that, never.

Now that electricity and internet is down in Ukronazistan, the trolls will give us some rest.

I know this is meant as a joke, but the amount of Ukro trolling did reduce after the beginning of anti-power-grid campaing (I remember seing stats somwhere).

Six million Ukrainians have now been killed and this is a fact.

Shot them on spot and film that on camera ! And after that spread it all over the net. Ukroshits would do the same, do you have other opinions ? Put them to the nearest pole, tree, wall, etc, and anybody from the antiterro squad read a short sentence like that: ‘………………….for sabotaging the mother Russia peoples assets, you’re sentenced to death’.

Look at the cringing NAZI COWARD not so tough after getting caught are you you NAZI FILTH, HANG THAT NAZI FUCK FROM THE NEAREST LAMPPOST NO MORE NAZI PRISONERS. =Z=

Well, what did you expected when you invaded their home play stupid games win stupid prizes