Twitter user (ZOKA) was the first to notice that the mortar attack was carried out a few meters away from a Turkish observation post. The post can be identified by its special wall, which is made from HESCO-style modern gabions. A Turkish flag can be also spotted in the corner.

HTS’ terrorists didn’t only launch the attack from the vicinity of a Turkish observation post. The terrorists also used a Turkish-made HY-12 mortar. The HY-12 is a licensed copy of the French MO-120-RT [Mortier de 120mm Rayé Tracté Modèle F1] manufactured by Turkey’s MKEK.

The mortar attack, which targeted the town of Msheirfeh, was apparently launched from the vicinity of the Turkish military post in the town of Suramn. The post is located around 10 km away only from Msheirfeh. The range of the HY-12 mortar can cover this distance. Earlier this month, HTS and its allies used Turkish-made weapons, including HY-12 mortars, in a large-scale attack on SAA positions in southeast Idlib. The attack was allegedly launched from the vicinity of the Turkish post in Suramn.

This attack raises serious questions about the role that Turkey has been playing in Greater Idlib. More than a year ago, Turkey committed to push terrorists out of the region’s vicinity. However, the influence of these terrorists is now stronger than ever before.

SAA supporters, say what you want, but we all know that Idlib won’t be liberated. It will stay under Jihadist rule. Turkey’s beggings for ceasefires allowed the Jihadis to unite (for example the nfl, hurras al-deen) and fortify their positions. Additionally, Erdogan constantly supplies the Jihadis with weapons and the SAA only launches limited operations every 3 months. The war will maybe last for 10 more years. I really lost hope that Idlib will be liberated any time soon. Many saa supporters don’t say this, but they know this. The SAA also has been weakend.

Who cares about Idlib, let’s focus on the oil fields now. When all civilians have fled Idlib, we’ll just ask Russia to drop a couple of FOAB’s on it and get over it. Idlib is the most mountainous area of Syria, thus the hardest to liberate, but the shockwave of a FOAB can surely go through rock ;)

But the liberation of Idlib would mean the defeat of HTS etc. That’s the most important thing now. There is no chance that the oil fields will be liberated in the near future without any significant development.

There is, keep hope, US army hates hit and run attacks, so it’s not a liberation, it’s simply an insurgency against them so they leave themselves. Kinda like guerrilla. About HTS, as long as they don’t shoot rockets at Aleppo and other government held areas, there isn’t really a problem with them at the moment, they can have worthless Idlib, hide in the mountains like cavemen.

I just hope the US forces at the oil fields will suffer the same fate as the ones during the Beirut 1983 bombing attack. They always act like the best army of the world, but in reality they are some bunch of murderers. They are only the “best” army, because of their technology. If all would be about courage and morale, the SAA and the Houthis would be the best armies of the world.
HTS shelled Aleppo multiple times, killing many civilians. I’m sure this enough to finally launch an offensive in western aleppo. I hate seeing civilians die.

Syria will secure all of its territory (land mass of 185,180 sq km) including the Golan Heights.

Fourth Geneva Convention stops an occupying power from transferring parts of its own civilian population to an occupied territory.

ISRAEL HAS TO STOP STEALING LAND – Israel must vacate and demolish all those illegal martial-law bunker housing developments. Israel wanting conflict with every country that does not recognize them as a real country will cause them to vaporize. 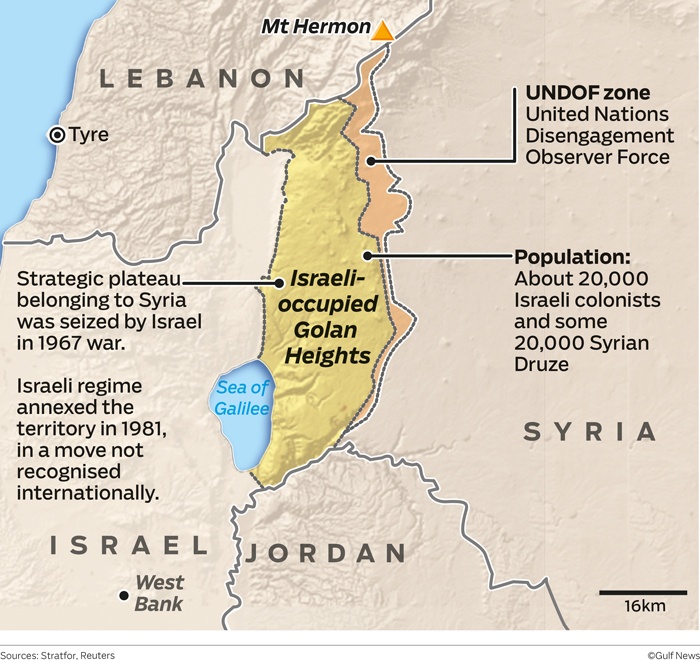 Ahhh, Astana agreement number 14, Erdogan wanted it and Putin delivered it, so I hope Erdogan’s really grateful.
The new version of the agreement is working out perfectly, the SAA are bogged down and losing ground again, as usual, and the FSA, SNA, and HTS are all happily attacking the SAA again with no fear of reprisals or consequences, as usual, and they’re even using the Turkish OB posts to launch their attacks against the SAA and civilian targets, as usual, talk about being confident, they must really trust the new Astana agreement and the ceasefire are going to hold, even if they keep breaking it themselves.
The Astana agreements always hamstring the SAA and empower the terrorists, so why the hell does Putin do it every single time Erdogan asks him to, why does Putin agree to enforce these God awful ceasefires on the SAA when they’re so harmful.
Putin’s supposedly trying very hard to drag both Erdogan and Turkey out of NATO, using his newly formed relationship with Erdogan to try and break the alliance apart, LOL, but NATO, the EU, and the US aren’t doing much at all to try and entice him to remain, apart from a few polite words of “yes we should remain a powerful alliance”, but that’s all they say, they do nothing at all to help Erdogan, NOT A THING, if anything they’ve been saying “we told you not to invade Syria so don’t ask for our help now”, Putin’s the only person Erdogan can rely on for help.
Even if Putin did manage to pull Turkey out of the NATO alliance while Erdogan was in power, how long would Turkey stay away from NATO, the US and EU, if and when Erdogan finally lost power, the leaders of the US, EU and NATO know exactly what will happen, Turkey would go running back to their old friends and leave Putin in the lurch, that’s if Erdogan doesn’t do it first.
Hopefully Assad’s wiping his butt with that latest version of Astana agreement number 14, and making preparations to make it and any future ones obsolete.