The Houthis shot down on November 29 an AH-64 Apache attack helicopter of the Saudi-led coalition near Yemen’s border with the Kingdom.

Brig. Gen. Yahya Sari, a spokesman for the Yemeni group, said in an official statement that the helicopter was downed with an anti-aircraft missile “equipped with a new tech” that will be revealed soon. The spokesman added that a video of the operation will be released.

“The Armed Forces affirms that approaching Yemeni airspace is prohibited … and that it will confront all the enemies’ violations until it reaches full protection of Yemeni airspace,” Brig. Gen. Sair said.

According to the Houthis, both the Apache’s pilot and gunner were killed in the incident, which took place south of the Saudi province of Asir.

Yemeni sources released a short video supposedly showing the downing of the Saudi attack helicopter. The video has not been verified, yet.

Around 30 Apache attack helicopters are in service with the Saudi Arabian National Guard Forces (SANGF). More than 90 others are operated by the Royal Saudi Land Forces (RSLF).

Saudi Apache helicopters participate in the offensive and defensive military operations along the border with Yemen on a regular basis.

Earlier in 2019, the Houthis revealed two “locally-developed” air-defense systems. Back then, the Yemeni group said that other unknown systems are in service, or being developed.

the bravest of the brave…bravo

death to america death to Israel curse on the jews.–houthi slogan

I miss Wahhabi there too. 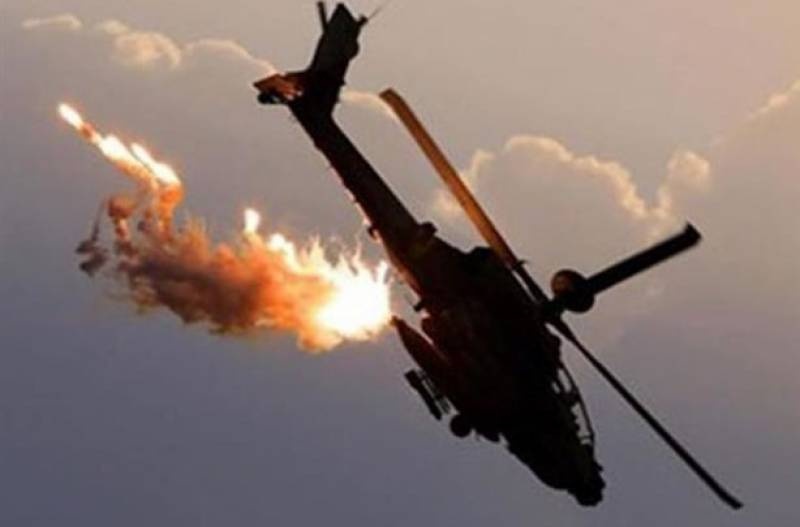 Houttis through Yemeni army also have the SA 24 Manpads

I don’t know what weapon was used to down this helicopter.
I’m not sure they use Russian Igla MANPADS they might as well use FIM-92 Stinger that’s manufactured by Roketsan in Turkey like we seen in Syria.

It wasn’t MANPADs, the AH-64 Apache is incapable of being shot down with IR-guided missiles. It has advanced IR jamming pods (AN/ALQ-144) and lots of Chaff/Flare dispensers. It was most likely a radar-guided or command-guided missile.

I’ve heard that was SA-8 Gecko.

Damn it really long time to wait for their aircraft falling, hope there are more to fall in the future especially those mercenary piloted f15

RIP to our KSA Saudi allies.

Lol, yeah they would of went ‘wraith’ mode and the missile would passed through the helicopter, just like a Hollywood movie where you get your ‘reality’ from. Zionist scumbag.

Unlikely. They take after their counterparts in the navy who can’t even steer straight.

God I hope so. It’s about time. Might as well since they are being blamed for it anyway.

Just an recomandation, never waist time on the Yankikes army of droolers, let them drool, I find them just amusing and learn to live with them, like acne vulgaris aka pimps on our asses, an problem of course, anying, hell yes, but we will have to live with them, one of the reasons I am certain our Creator have an morbid sense of humor, at least for an while, so just to go into an drool fight, its not even worth it.

Of course, and what if the Iranians indeed gave this to the Yemens, hell if I could I would do the same, and help them to beat the vassals of the scums of this earth, but I think this is home made, Yankikes, but then again, with an people spoon feed nonsense from Hololowierd for decades, they will never belive anything other than what the movies feeds this shit for brains anyway, and they stil cant wrap their vaccume heads around the fact the attack on the refinery was indeed done by the YeMENs, and your crappy missle shity systems didnt see it coming, and to think then that blaiming Iran for it, is somehow making the defeat any way better, or what, more credible, if it was Iran, despite the geographics, crossing the sea, etc, straight thru the 5 fleet, and thru an area packed to the brim with everything of whats called7defined as radar systems, retards, just make the issue for your army not in any way or form better, it makes the situation just so much worse, moronikans.

I am really confident that the Houtis, is able to make the missiles they need, since I am an firm beliver in quality contra quantity, specialy regarding tech to take down choppers, to planes.
Its not that sophsiticated, its more an issue of education and the gear is everywhere, I have even held an Rathyon guidance board in my own hands, son, and so on, its all about making the right tech, and find an guiding system that can operate despite the so called contra messurments, you have squiced into the shit you have sold to the even dumber Saudi-barbarians.
I even think I know what they have or is evolving their gudinace systems into, but that, moronikans isnt something I would talk about at all, and not here, nope, but watch it come into use, I guess the Iranians already have it.

May the lord have mercy upon the Yemens and bless them in their rightfull and glorious fight against the spawn of satan and its vassals.

Well done dear brothers. This is day by day turning into bigger swamp and Vietnam for Saudis.
Death to Wahhabis, Death to America, Death to Saudis and MBS. Let’s see Aramco and east-west pipeline attacked again. Let them pay for Yemen.

If this was a White Helmets video there would be a music intro, letters flashing across the screen, and perfect stability. But since the Houthis actually produce authentic footage from the field of battle, you get what you get.

Let’s hope it was being flown by mercenary pilots.