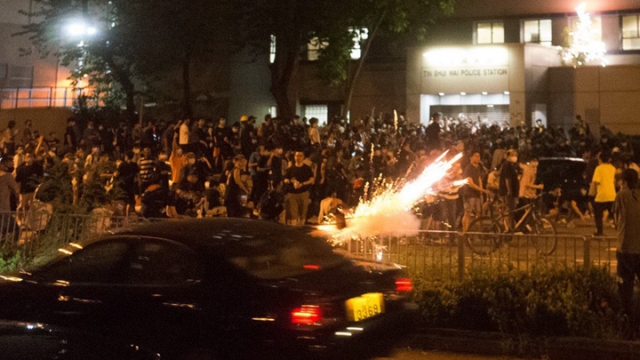 On July 30th, protests in Hong Kong continued, with unknown assailants shooting fireworks at a group of demonstrators in a “drive-by” style incident.

Hundreds of protesters were outside the police station to support two young people taken by police from the Tin Sau rugby Pitch, after the pair tried to stop a man from taking photos of them and damaging the area’s “Lennon Wall” message board. The man claimed he was attacked and called the police. 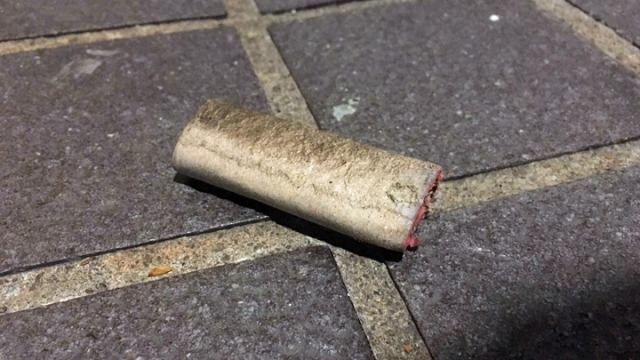 Firework leftover from the drive-by. Click to see full-size image 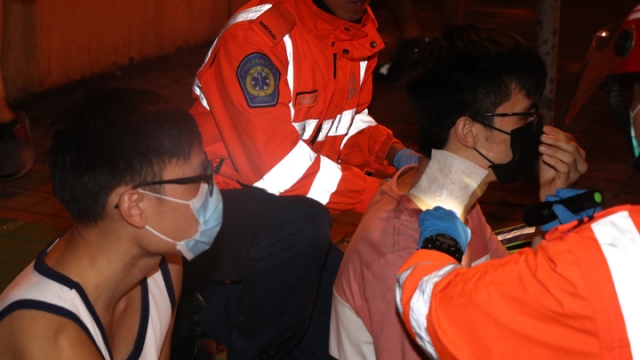 To, once again, debunk the reports by MSM that these protests are for democracy: they aren’t – again there is no single mention of it.

The two were released on bail at around 2am, but the crowd remained.

At around 2:30am, a black car drove by and shot several fireworks at the crowd, who quickly escaped.

The car was a Toyota bearing the licence plate LP3369. However, public records show that car registered with the plate should be a black Nissan, raising questions over whether the car was using a false plate.

On the same night, protesters also surrounded the Kwai Chung police station in support of 44 protesters who were charged with rioting earlier in the day.

Media claimed that the protesters were allegedly apologizing to every car they had blocked. Such reports are a common part of mainstream propaganda campaigns for such events.

They say sorry to every car for blocking the road outside Kwai Chung Police Station. pic.twitter.com/l88ewbEAmG

Regardless, riot police were deployed to handle the situation. There were clashes and pepper spray was used by the authorities.

One officer pointed a Remington pump-action shotgun at the crowd.

The people charged with rioting were arrested at the July 29th protest, after violent clashes in Sheung Wan.

From 9:38pm — After multiple rounds of tear gas were fired by police, smoke hangs in the air on the streets of Sheung Wan.

In one instance, police fired tear gas only to have the smoke blown back their direction. #HongKong #antiELABhk #HongKongProtests pic.twitter.com/msJfP6UC8P

One of the anti-extradition law movement’s demands has been for the “riot” characterisation of protests to be dropped. The charge carries a maximum prison sentence of 10 years under the Public Order Ordinance.

Also, on July 29th, 200 protesters made their way towards Sai Wan’s China Liaison Office – where a week before, protesters engaged in acts of vandalism, defacing the Chinese emblem on the building’s facade.

Police fired the first tear gas rounds shortly before 7pm, and gradually pushed protesters to the east and away from the Liaison Office. 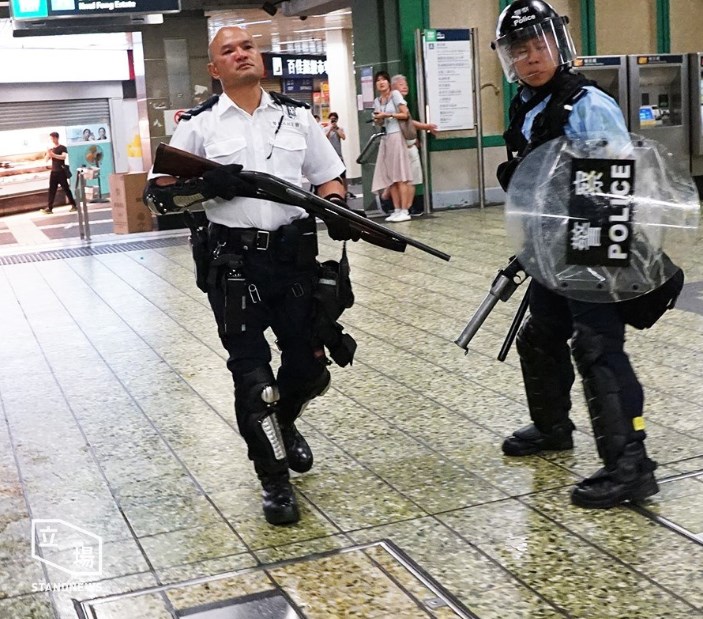 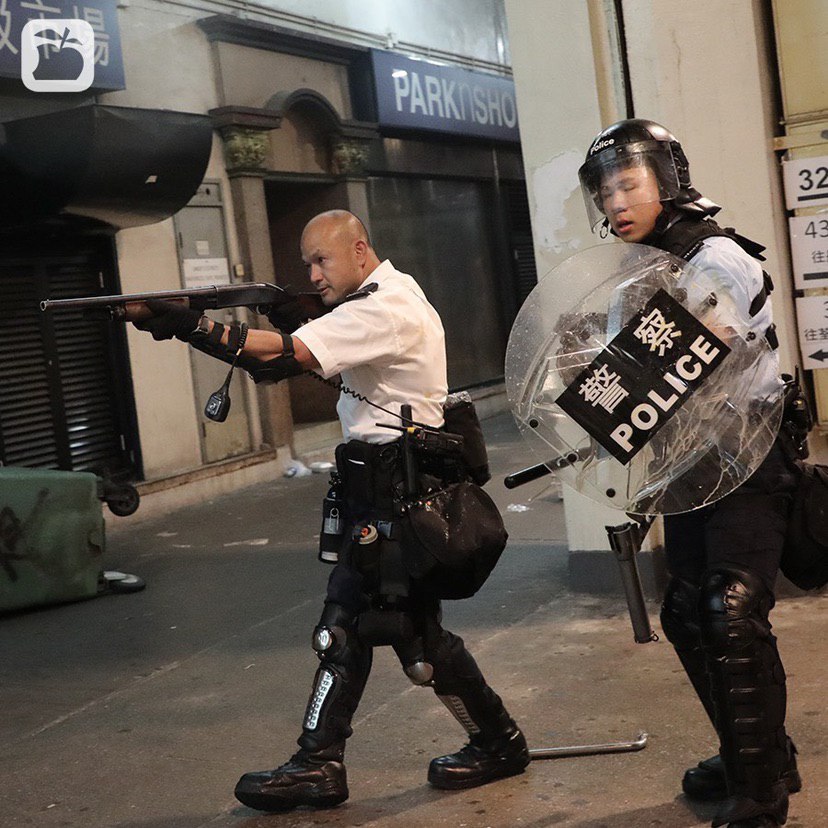 The Special Tactical Squad – also known as the “Raptors” – made lightning raids into the ranks of protesters, resulting in multiple arrests on Des Voeux Road.

Police officers use pepper spray into an exit of Sheung Wan station. Inside, protesters use a fire hose to repel police. #antiELABhk #HongKong #HongKongProtests pic.twitter.com/Y1yicAGOyk

Separately, during July 29th’s Foreign Ministry briefing, spokeswoman Hua Chunying said that US allegations and concerns regarding “police brutality in response to peaceful protests” was misleading.

“First of all, I believe his allegation of Hong Kong police’s “brutality in response to peaceful protests” is entirely misleading. You may have seen the storming of the Legislative Council and the Liaison Office of the Central People’s Government in the Hong Kong SAR by the violent radicals. They also attacked the police using lethal weapons in a premeditated and organized way. How could some people in the US call such behaviors “peaceful demonstrations and protests”?”

She furthermore alleged that “certain people” in the US and Europe had assisted violent radicals in Hong Kong.

“Recently, certain people in the US and Europe have covered up for violent radicals in Hong Kong and turned a blind eye to their violent illegal behaviors. But I believe you are all aware that American and European police have never shown any mercy to violent behaviors at home. They have blatant double-standards on this issue.”

She furthermore reminded that recently the European Council passed a bill on peaceful protesting, and that has a limit.

In remarks on the next day, Chunying commented on US Secretary of State Mike Pompeo’s claims that protests in Hong Kong were “appropriate.” She said that Pompeo had forgotten himself, and that the protests were “appropriate,” because they were mostly fueled by the US.

“I think Mr. Pompeo obviously failed to put himself in a right position. I’m afraid he still regards himself as the CIA chief. He said the recent violent incidents in Hong Kong are appropriate because, as you all know, they are somehow the work of the US.”

She reminded of recent actions by the US in connection to Hong Kong from various officials, including Pompeo, Vice President Mike Pence, among others.

“Let us think about what has happened. According to public reports, at the end of February and the beginning of March, the then US Consul-General in Hong Kong blatantly criticized the Hong Kong SAR government’s bill amendment and the “one country, two systems” principle and interfered in Hong Kong affairs. In March, US Vice President Mike Pence met with Hong Kong opposition lobbyists. In May, Pompeo met with Hong Kong opposition and made irresponsible remarks on the amendment matter. In June, Speaker of the US House of Representatives Nancy Pelosi even called the demonstrations in Hong Kong ‘a beautiful sight to behold.’”

In conclusion she reminded that Hong Kong is part of China and the White House or the US “monitoring” a Chinese force along Hong Kong’s “border” is unjustified.

“The US has to be clear that we are talking about Hong Kong. It is China’s Hong Kong. Like we stressed many times, the Chinese government will never allow any foreign forces to have a hand in Hong Kong affairs. Neither will we allow them to mess up Hong Kong. The central government firmly supports the SAR government in governing Hong Kong in accordance with law and support Hong Kong police in strictly punishing violent criminals to uphold security and stability in Hong Kong. Those who play fire will only get themselves burned. There have been so many lessons in history. We advise the US to immediately stop playing the dangerous game of pulling chestnut out of fire.”

Soros is not a good guy but unlike Putler he doesn’t assassinate opposition. And since Russians killed 15 million Ukrainians in Holodomor, they have every right to display Hitler symbols when fighting Stalin lovers.

The New York Banksters Supported Jewish Bolshevik Holodomor you mean? THEM SATANIC JEWS & FREEMASONS LOVE TO STARVE PEOPLE TO DEATH SO THAT THE GOYIM WILL EAT THEIR OWN CHILDREN

Stalin was a Freemason…so the Cabal is Complete…

HAHA you have some commentators here, that would kill you for saying that

Name ONE person killed by Putin and show us proves. If not just shut up.

Like many from the West you are total ignoramus! Holodomor as crime was committed against RUSSIANS since Ukrainians are also Slavic and Russians! They are the same people as the rest of Slavic Russians! Ukraine as (Russian) word means = Border-land ! Those were the Russians that lived on the “border” thus they were called Ukrainians!

Western Ukraine that Stalin has joined to the rest of the Soviet Ukraine was never and still is not populated by Slavic Ukrainians!!! That part of Ukraine was always pro-NAZI.

There are also Non-Slavic Ukrainians?

What language do non-Slavic Ukrainians speak?

Why all those silly questions? Go to your beloved (and biased) Wikipedia to educate yourself…

You edited the above reply, after I asked you so it was not a silly question, but related to your comment that you edited. Don’t worry I observed it’s a common practice among desperate Russians here, I’m used to it.

I honestly don’t know what are you on about…

If I sometime edit comments I do that to correct mistakes only. Not to change the context. You ,are getting desperate…clinging to any excuse.

I don’t have any reason to be desperate as our comments mean nothing anyway. I most of the times edit mine too to fix some grammar or to add more text at the end. And yes, some times I ask for excuse when I find some human commentator here since I treat you all like talking monkeys.

Btw Ukrainians are not from Russian origin, they are the Real Russians, Moskals are from Kievan Rus origin plus Mongol tribes mixing as can be seen on their presidents Putin and Yeltsin and most of their entourage, also the ‘little green’ soldiers that invaded Crimea.

Jews Poles and other assorted riffraff.

Ever heard of Julian Assange and Edward Snowden? Julian Assange’s life is in danger (by US) as we speak. And only because he was being honest journalist doing his job! His life is put in grave danger by US globalist terrorists. While in the same time US supports global Muslim Jihad and Ukrainian and other neo-NAZI’s and disruptive “color revolutions”(like that in Hong Kong), support dictatorial regimes of all kinds also. So huge majority of wars today are started or sponsored by world terrorists = US and their stooges. US does everything to keep everybody in submission Neocolonialism at its worst, ever! True “awesomeness” !

“Ever heard of Julian Assange and Edward Snowden?” yeah they are 2 examples of Western ill-doing, among the 200 journalists dead in Russia since ’90. If they were Russians they were 100% dead by now.

“200 journalists” And where did you get that number? Right out of your arse I suppose… You have no proves for single journalist being murdered by Putin (I guess Putin is your target ) Snowden is in Russia and not in some Western “democracy”. That’s why he is still live. If Julian Assange did the same ….today his life would not be in danger. US is regime with one foot in fascism already. Authoritarian rigid and sometimes too corrupt, Russia looks much more “free” than US.

So words “lol ok mate” are your “proves” of Putin’s guilt I suppose?!?! How pathetic!

As for number of the killed Russian journalists “just between 1990 and 2000” that period belongs to your “friends” of the West (the traitors of USSR and Russia) Gorbatchev and drunkard Yeltsin!

Putin just came to power in 2000 and Russia was totally controlled by the West and their stooges – Russian Jewish oligarchs. So responsibility for the killed journalist (and destruction of Russia) goes on them above all ! If anything was going wrong in those days we can thank that only to CIA and MI6 and other Western agencies who had total control of Russia and those Russian Jews oligarchs!

If these protestors think they will ever get the chance to spend the US dollars they are earning they are very stupid.