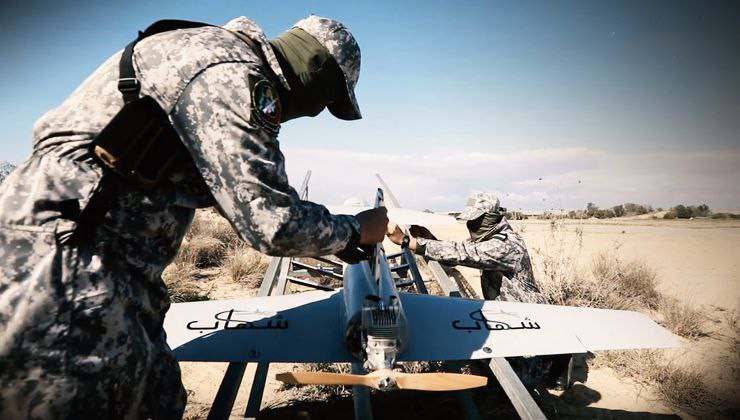 On May 13, the Izz ad-Din al-Qassam Brigades, the military wing of the Hamas Movement, unveiled a suicide drone, which was used in recent attacks on Israeli targets.

In a statement, the Palestinian faction said that the suicide drone, dubbed “Shehab,” was used in an attack on an Israeli naval gas platform off the coast of the Gaza Strip on May 12. As a result of the attack, production was halted at the rig.

Several Shehab suicide drones were launched by the Izz ad-Din al-Qassam Brigades at Israeli military gatherings in the vicinity of the Gaza Strip on May 13.

Israeli sources confirmed that four to five drones were launched from Gaza. At least one was successfully intercepted by the Israeli Air Force, which released a video of the encounter.

#IDF release footage of the targeting of #Hamas Al-Qassam new suicide drone, just dubbed by themselves as the “Shehab” pic.twitter.com/wxktDZi1zC

The Israeli military was expecting Palestinian factions to employ suicide drones. A day earlier, two attacks with drones were thwarted, according to Israel’s claims.

The Izz ad-Din al-Qassam Brigades are yet to reveal the specifications of the Shehab drone, which is similar in design to the Iranian Ababil-2. Copies of the Ababil-2 have been in service with Lebanon’s Hezbollah and Yemen’s Houthis (Ansar Allah) for years now.

Earlier, the Izz ad-Din al-Qassam Brigades unveiled a new rocket, the “Ayyash-250”. The rocket was used in an attack on an airport in southern Israel.

Hamas and other Palestinian factions in Gaza are clearly not willing to step back. The same goes for the Israeli military, which is still striking targets in the Palestinian enclave. As for now, a ceasefire seems unlikely.

Like I said before, they are testing where they can hit – Plastic Done shit hit 270 out of 370 – 100 rockets hit. Those rockets weren’t new or I should say the best Hama has…Nazi Zion are jokes just like NATO a fuking joke and they do nothing but burning money. Nazi Zion here go on and tell us what have you achieved? Nazi Zion killing civilians as if that going to stop Hama…you all fuking joke, you don’t fuking know where Hama hiding their main rockets and shit, so you sub-humans leveled a fuking civilians building. If Nazi Zion knew where Hama hide their rockets they wouldn’t shy away to hit it…that is just facts, we all know, so why they don’t…they don’t know.

Yeah, Nazi Zion you are winning and the world is laughing at you in Iran – Lebanon – China, and Russia. You morons killing the only country that feed you, THE US. You don’t have the money for Plastic Dome, the living standers in Nazi Zion were bad and it just going to be worse. A Safe place for who? Nazi Zion are outsiders from the EU and a small number of Jews from M.E and AF, and Nazi Zion killing and blame AF Jews now…LMFAO a safe place for Nazi Zion but not Jews…

BTW LMFAO the Nazi Zion using jets and drones to shut down Hama’s drone 😂 where we see that before, they know their Plastic Dome can’t hit shit 😂 you fuking Nazi Zion should have sold you shit to Wahhabis before this…😉

I’ve been watching this war for 32 years. Hamas has grown much stronger and smarter. Something is different this time. They were never this sophisticated. Their rockets were never this effective.

The Apartheid colonist state is about to fall …

Or so they would have you believe. But the IDF are liars to the core, so wait for tomorrow when Hamas drones will be all over israel.

wow that is truly incredible, it seems this is the final battle!!!!

Looks like Hamas is using the low performance stuff first to depleet the IDF AD system. Later the more sophisticated weaponry is deployed, which will have abigger chance of success as IDF does not have the full AD capacity at hand to defend. Iron dome will soon be out of ammo, then it will get clear how vulberable Israel is, and what a mistake it was to stear the anger during ramadan.

HEZBOLLAH, PLEASE PROTECT OUR PALESTINIANS BROTHERS AND SISTERS AND THE CHILDREN AND ELDERLY,