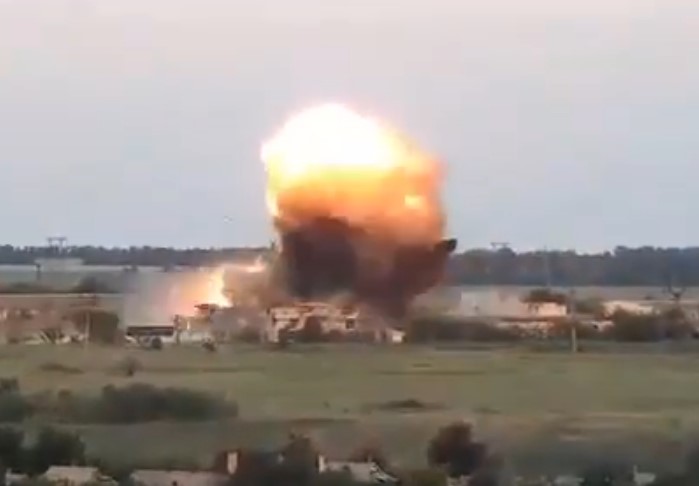 The video filmed in late June shows a strike on positions of the Ukrainian Armed Forces (UAF) near the village of Maryinka with a UR-83P mine-clearing line charge.

Maryinka is located on the contact line between the UAF and forces of the Donestk People’s Republic (DPR). The village itself and its nearby area is the place of almost daily clashes and artillery duels between pro-Kiev forces and DPR self-defense units.

This countries they should calm the fuck down.. This idiot in the video doesn’t realise that he may actually take the life of someone,a human, maybe has kids and wife at home ho they are waiting for him to come home to see their family tho hug them,… He should put himself in the place of that soldier/s for a second…. We must stop whit this happiness when we see a human being killed, because if we do continuing like this, sometimes is to late to change something. Look at the history and see how big wars starts!!?? From where I am standing and looking back at the history and seeing what is happening around the world at the moment,.. I am actually very worried,. Our life is in the hands of some people ho can make some decisions that can have a a good but as well catastrophic consequences, .. We as humanity we have to make sure that this people are remove from their functions.. we cannot have a war in Europe or to star a war with Iran, it can spread like wildfires…across the globe.. PEACE…..?

This is WAR , what did you expect ? The 60´s are looong gone, stop being a hippie wannabe.

Yes I know but nobody want to repeat history… war world 1, War world 2, A war in our days 21 first century Will be so devastating …unimaginable deaths… black death was a lie in comparison what it could happen if a war world will start

How about Kiev-backed yukos fuck off from the east of the countries and everything will be fine.

The evil ones must be stopped tho

you are just pointing out the pointless and obvious, your pint being what ? All gonna get killed, yes, so ? We are observers , not actors. We´ll see what happens.

thanks to the USA , correct so ?

Yes you are totally right. They exit INF treaty.. And a domino effect started

From the other side of the seas i see the.same crazy polarizing drive towards war, it seems it doesnt matter with whom anymore, wether its amongst ourselves or against the whole world!!

The parasitic financial class needs war to keep the ponzi scheme going. They are the part of the puppet master ring that needs to be rooted out.

The Yemenis may assist us in this cause as they a beating the saudis pretty bad right now.

One day at a time bud.

they did organize such referendum in 2014. Ukraine (US) sent UAF army to suppress it and that is the moment when civil war started.

Yankobitch is at fault for all that died there that day .

No its you and your fascist Azov battalion chums that are responsible!!

When you point your finger at someone three of yours are pointing at you!

Hahaha I have no sympathy for nazi ukrainian army

Its the Russians that are the Nazi . A bunch of jew haters that invaded Ukraine and send in weapons in the fake aid convoys .

Ah the old anti semitic card, way to show whose hand is up your ass!!

They serve a jewish president, how on Earth are they nazis?

Because the nazis served the same wall street bankers.

You must be wilfully blind. Jewish ukro leaders finance and or lead and or support Bandera Ukro fascist groups. With regard to “race purity”,Jews in the Ukraine and Ukro fascists are in agreement. Israel to this day is run along Nazi lines. Hitler’s Nazi ideas are taken from Panturkism which in itself is taken from the old Testament Jewish ideas on Racial purity. Ironically ,Nazi states lived ok no quite well as post we II South Africa ,Turkey and post 1948 Israel.

You are either not well informed ,scheming or simple.

nazi yews made a written agreement with Adolf.

hahahah u do not know do u?

nazi = national zionist .nazis and jewish (zionists) was and is the same

I hope all the Russians that invaded Ukraine become cargo 200 soon .