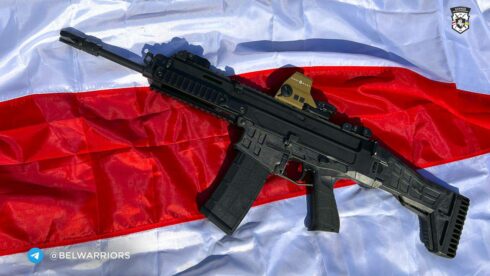 On March 25, militants of the Belarusian battalion named after Kastus Kalinousk took the oath and joined the Armed Forces of Ukraine. Previously, it operated as part of the territorial defense of Kiev.

“Our battalion is part of the Armed Forces of Ukraine. The vow was written in Belarusian by our volunteers. We are confident that in the future this text will become the basis of the oath for the real Belarusian army,” the battalion’s report reads.

The “battalion” was created after the start of Russia’s special operation in Ukraine by formations opposed to the Belarusian authorities, including Svetlana Tikhonovskaya. The Belarusian oppositionist and failed President of Belarus, staying in Warsaw, is actively involved in mobilizing volunteers to protect the Kiev regime.

Tikhanovskaya held a meeting with Pavel Kukhta, coordinator of the training center for mercenaries to be sent to Ukraine, including the battalion named after Kastus Kalinousk. Tikhonovskaya is acting in close cooperation with the Ambassador of the United States to the OSCE, Michael Carpenter, who promised her the full support of Washington.

Luka, comrade, you joining my forces!

What do you mean, my generals are trustworthy!

But… now as you say…

Joe
Reply to  Vlad the invader

Don’t worry, they will soon be reKalibrated

Vlad the invader
Reply to  Joe

Yeah yeah, have no soldiers left! Need to replace with expensive missiles.

Too bad they only hit half of the time only?!

Darlene
Reply to  Vlad the invader

I get paid more than $90 to $100 per hour for working online. I heard about this job 3 months ago and after joining this I have earned easily $10k from this without having online working skills . Simply give it a shot on the accompanying site… Here is I started…….. 𝐖𝐰𝐰.𝐇𝐈𝐆𝐇𝐏𝐀𝐘𝟏.𝐜𝐨𝐦

Clyde
Reply to  Vlad the invader

Boom goes the Kalibr! Do you have the video of the thousands of Russian prisoners taken in the encirclement north of Kiev?

Would you mind providing a link to confirm your claim that “thousands of Russian prisoners have been taken in the “encirclement north of Kiev? LMAO!

Would you mind providing a link to confirm your claim that “thousands of Russian prisoners have been taken in the “encirclement north of Kiev?

opereta
Reply to  Vlad the invader

The Ukrainian Generals hiding in Poland ??

Don
Reply to  Putin's Cock up Vlad the invaders ASS

If I found out my comrads were all being killed, I’d want to go join, too!

Vlad the invader
Reply to  Don

Oi oi oi, my soldiers are no dead! No no!

I liked Vlad’s comment because I imagined it to be the following scenario: Pavel, or whoever leads this Nazi outfit, is asking Lukashenko if he wants to join his homosexual army. Lukashenko tells him that the KGB are on their way with special forces to arrest him and all his little friends, a development which suprises Pavel. If the comment is in support of the nationalist battalion then it is very confusing.

Luka withdrew his units from staging room back to the training grounds?!

Really? Why would you even spend valuable time reading those posts. It’s a known bot from a ukrop bot farm.

basement in US embassy in poland
Reply to  Vlad the invader

I told you to think before spewing some BS. here is the deal. they are all coming out and that is good news if (big if) this is real. not sure it is real or fake, but anyway cia is woking overtime. would lean on it being fake because you don’t announce openly about these things. otherwise mr kalibr will personally welcome them. if you still have what is left of your brain, this is the logical conclusion. anything else is just BS generated by cia operation mocking bird.

gotta expect that there will more of this cia operation mocking bird as yanquis become more desperate. meanwhile, india just told yanquis to fuck off.

Belarus forces are pretty much on standby, possibly if there is an assault on Kiev or supply lines are imperiled. These jokers do not have sufficient numbers to alter the outcome of anything.

Luka tanks as good as mine, good ol’ Soviet days ago. If only I can finally find AFU frontline.

Russian Forces needs people like you now! How about Ukraine holiday house vacation?

Vlad the invader
Reply to  lmao

Luka withdrew his tanks, no support from him!

And my stored tanks are so bad, my regiment commander shot himself?

AutismAwareness
Reply to  Vlad the invader

Your mate Derick Lewis just left. I am not sure all her jobs are taxable, if you know what I means.

Give her a call Vlad. She might give you a concessionary rate on account of your troubles.

Manu
Reply to  Vlad the invader

You’re mostly alone by now. Time to go home and kill yourself.

They are attached to Russian forces around Kiev, just not in large numbers. Perhaps a couple of Battalions.

Vlad the invader
Reply to  Redguard

Stop with those mercs already! Already have to replace so many soldiers!

Vlad the invader
Reply to  GENERAL NOVOROSSIA DEATH TO UKROPISISASHKENAZISTAN

See, that’s why we no take back recruits! Hue hue!

Vlad the gaynal impaler crying and raging because Ukrops are dying by the hundreds each day :)

yo666
Reply to  Timmy Temperance

Who needs liberty anyways, if you can good ol’ Vlad!

These british serfs have had what they asked for. It was appalling, during the so-called freedom protests in Hong Kong, to see “young people” asking for a british intervention. Maybe they don’t know how the brits treated their ancestors, kicking them on the streets and calling them yellow monkeys.

I suggest these useful idiots to watch the films “Ip man”, where they can see how the “democratic” brits treated hong kong citizens.

Looks like it’s over for the Russian drunks , time to run homey while you can eh.

But I want to play Soviet Union empire!

It’s Putin and pals that are delusional numb nuts.

The Objective
Reply to  Crazy Canuck

Steiners counterattack might happen any minute now… He will save Kiev.

Just continuing where we left off in 1946. It’s been quiet for awhile but really this is just an average year in the blood lands of Europe.

Well, I guess: “Somebody’s got to take out the trash.”

Alexander Mussolini is even more inept than Putin. I don’t think he inspires much confidence around him. Half of the military’s leadership refuses to obey his orders. Why would they? The entire Russian military campaign has been an abdolute catastrophe.

Rented forces Vs true genuine true forces. More and more deadbodies moving to Ukraine to save the Washington and NATO puppet regime. They all would become BBQ in just few days.

Any regime that send weapons and terrorists to Ukraine to fight against Russia would be judged for their actions.

By who , the Russia that’s about to fall. Lol

No by crazier canuks than you.

funny how western degenerates believe their own lies

Prepare to be disappointed.

Fall? 😂 They can easily invade and take your precious Canada aswell, with their pacific fleet and forces in far east, while mopping up what’s left of Ukraine with about 20% military force. You are lucky that their goal is not to sieze more land though.

If Washington or NATO states use chemical or biological weapons in Ukraine or in Taiwan then Putin and Xi will use nuclear weapons on Washington and NATO states. Russia and China are not Iraq or Syria to play games with.

Belarus should side with Ukraine they have a better shot at their own independence than aiding Russia. Lukashenko has sold his country to Vladimir Putin for nothing whatsoever He’s a traitor r his own people and needs to be put in front of the execution squads

Vlad the invader
Reply to  BangderaSteponPutin

But my supply lines?? Where should I go with my convoys then??

Belarus is independent of which the President makes up his own mind. That has been clear for some years now. President Lukashenko sees the same threats as President Putin. The rest of the Baltic states are subservient to washingtub and scared to speak their own minds. So much for their integrity of statehood. Selling their people out to the NWO for cushy jobs and wealth incentives.

Russia lost another war , total bunch of losers and the paid trolls still try desperately to lie like RT.

Make sure you step out of mom’s basement for a few hours today, it’s a beautiful weekend!

This reminds me of Syria, i saw many jihadi groups joining the moderates, all ended up being bombed by RUAF LOL

oh make it a point to kill very one of these bearded rats . They cant be allowed to escape back to Belarus. if Belarusan criminals and traitors are going to volunteer for extermination they should’nt be denied the privilege

Theybwill end up like their Azov pals,with their balls barbecued.

They are absolutely delusional if they think Belarus will fight against Russia. If anything Belarus will be very happy to see these 200 traitors and servants of NATO and WEF be lead to slaughter.

Lukashenko should have had that bitch shot when he had the chances. This is blood betrayal.

What is with Interpol? It is supposed to be an organisation that facilitates the sharing of information about criminals between countries. It seems to have a torrid history however. The last President was Chinese and he is serving a lengthy prison sentence, allegedly for corruption. Now there is an Emirati President who is wanted for crimes against humanity including torture. Praty Patel called for Russia to be excluded from Interpol, but surely that just makes it easier for criminals from Russia to avoid arrest? How is that negatively impacting Russia’s campaign in Ukraine? Why does Interpol not just elect a high-ranking police officer as president, perhaps from a European country that has an effective history of policing?

😂 EuroReich as police? This man wants to turn Interp0l into the gestapo