Late on November 30, Azerbaijani troops started entering the Lachin district in the Nagorno-Karabkah region. The district is being transferred to Azerbaijani forces as a part of the ceasefire agreement reached between Armenia and Azerbaijan earlier in November. Nonetheless, the Lachin corridor, the road linking Armenia with the remaining territory of the Nagorno-Karabah Republic (Republic of Artsakh) will remain under the control of the Russian peacekeeping force.

Under the aforementioned ceasefire deal, Azerbaijan already established control of the districts of Agdam and Kalbajar. With the transfer to Lachin to the hands of the Azerbaijanis, the first phase of the implementation of the ceasefire deal is nearing its end. The next step is the restoration of the transport link between the Azerbaijani mainland and Azerbaijan’s Nakhchivan Autonomous Republic as well as the creation of the alternative road between Lachin and Stepanakert that would not pass through the Azerbaijani-controlled area. 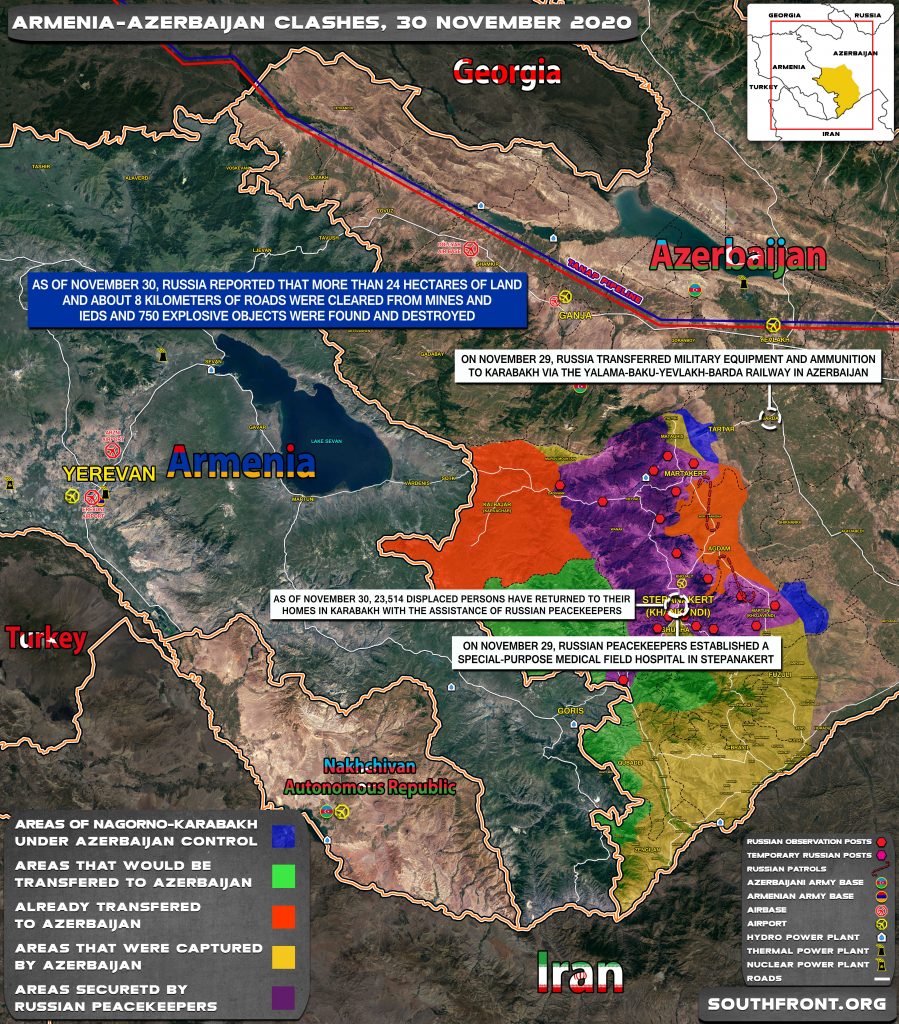 This is indeed a tremendous achievement.

While not all problems solved, some progress

There seems to be some dispute about the city of Lachin. The Armenians want to stay and won’t let the Azerbaijani refugees come back from Azerbaijan proper. I believe according to the peace agreement, all displaced Azerbaijan should be allowed to come back to their former homes. Those Armenian immigrants from Armenia should move out. Will be interesting to see what happens next.

Next is that agreement must be respectedall the time in all circumstances. Pashinyan have made those Arminian immigrants homeless, so it is he who must find them new accommodation for them.

The best option for Armenia is to return to the Armenia SSR model and form a union state with Russia. Armenia has two options given its location and demographics – either it will become a Turkish province or become a Russian protectorate. The only person looking out for Armenia’s interests right now is Putin. There is no scenarios where Armenia becomes a member of the EU and skips over Turkey. The West outsources its programs / goals in that region to Turkey, also giving it plausible deniability if any massacres happen, so West = NATO = Turkey. Russia is a much better option for Armenia than Turkey, given the history..

whats in it for Russia?

With Georgia in the column of the West, and Azerbaijan in the column of Turkey, Armenia would be a strategic area on Russia’s southern border / zone. Definately, Arrmenia benefits more from the protection of Russia. In fact, the most valuable asset for Armenia is the alliance with Russia. All Western ‘aid’ and ‘democracy’ has one aim and that is to sever the Russian – Armenian alliance. Pashinyan’s plan may have been to completely lose Artsakh, have Armenia blame Russia and make a break with Russia. Russia saw through this and intervened.

Russia already has all it needs. Absorbing Armenia will be nothing more than another caucasian burden on the federal budget

Armenia serves as a buffer between Russia and Turkey. With Armenia on their side, the Russians have a military base on the Eastern border of Turkey, which has some value. If Armenia fell to Turkey / NATO column, they would be able to place Turkish or NATO troops all the way to the Southern border of Russia, which would not be desirable for Russia. There are some benefits to the base in Armenia, which is leased through 2044.

Armenia doesn’t need becoming part of Russian Federation. All it takes is creating military alliance and Armenia is protected 100%. Being CIS member and having military bases is good but not sufficient (when president and prim minister are anti Russian) while military alliance and military base in Nagorno Karbakh would be bullet proof for any kind of aggression from anybody. If NATO can aggress Serbia and rip off part of her territory with bogus “humanitarian” reasons and would be “protection” of Albanians, so can Russia.

We call on all parties to show restraint.

– UN + Turkey LMFAO Remember them and fuk them.

Have you questioned how Iranians are getting targeted?

KSA, Turks and Azerbaijan seems to have vendetta against you.

Have you seem how many NGO are in Iraq buddy? US are in Iraq and fuk no they are not hiding in their base 24/7 LMFAO…they have spies in Iraq and Iran…MEK/Sunni Iraq/Kurds any lowlife that need money. It is not hard to do such thing in Iraq/Iran/Syria.

The Iranian senior commander was shipping weapons to Syria…and from Al Qaim border crossing from Iraq which under watch by US 24/7.

KSA/Turks/Azer are British -> US dogs the fuk are you on about bud. KSA is Wahhbi Sunnis state fuk them for all I care – Turks+Azer are apart of Muslims Brotherhood to hell with them. Vendetta against Iran – the same fukers that aided Saddam to kill Iranian? the same people who are aiding terrorists in Iraq and Syria? The same people who killed Armenian before and again? I say fuk em to hell they go. https://english.iswnews.com/wp-content/uploads/2019/09/Bukamal-Al-Qaem-border-crossing.jpg