Russian military sources are sharing a lot of videos showing the destroyed Ukrainian positions on the Donbass front lines, where Russian troops are storming Ukrainian strongholds in different regions.

Heavy battles are ongoing in the area of the town of Avdeevka on the northwestern outskirts of Donetsk. Russian-led forces are yet to repel Ukrainian units from the town. Instead of storm the heavily fortified Ukrainian strongholds in the town, Russian forces are surrounding Avdeevka in the south and in the north. 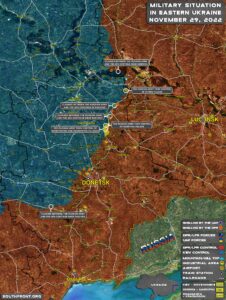 South of Avdeevka, Russian forces have already taken control of the Donetsk ring road and took control of the village of Opytnoe. Russian assault on Vodiane, Pervomaisky and fortified areas in the Nevelskoe area continues.

The newly published video from the outskirts of Avdeevka confirmed that the Ukrainian is suffering heavy losses in the area.

Seems to be advancing across this entire section of the front. Interesting to note is this front is the most fortified of Kievs forces. It also has the largest concentration of western militants on top of largest groupings of Kievs forces. If Bakhmut falls in the coming days, there might be a major push as that city is in many ways a springboard, in addition to serving as an important location for logistics and control.

Nice, does anyone know how many dead Islamist mercenaries there were? The more, the happier I am.

Pray that one day an Islamist may piss on you so your boyfriend will know what a man smells like.

No need to spoil his joy.

you seem to have experience in that field…please, enlighten us…how does it feel?

To see that there is hope for humanity when illiteracy is eradicated, even if it has to be done this way. It gives me hope and joy.

US and UK have been killing and genocide 6 million of innocent peoples in The Middle East, it’s times for Islamic peoples to revenge US and UK in Donbas lol

After the liberation of Artyomovsk, it will be easier to restore a more offensive approach towards the border of the DPR.

But Russian soldiers should be cautious during mop up operations, the ‘Ukrae nazistus’ is a treacherous and very perfid species. Be careful with the animal, he always can try to bite you in the leg.

Instead of being home with their families, they got tricked or forced into dying for the Ziomafia banking parasites.

The boys, and girls, of the US, UK, and europe, are next if western warmongers get their way. To the US, the UK, and the EU, Ukrainians were only meant to be the cannon fodder. The US and nato are learning a lot from their Ukrainian sacrifice.

Wondering how many American mercs among the dead

You have to be pretty hungry to swallow the swill Zelensky’s been serving, the poor devils.

I don’t see anything abnormal. Just nazis in their natural state. Dead.

The landscape with shattered trees reminds me of similar photographs taken on the western front in WW1.

Dead nazis, or is that WW2?

The dead soldiers remind me of the eastern front in WW2.

Ultrafart the Brave
Reply to  Christopher

FWIW I wouldn’t want to be anywhere near those places when the shit is hitting the fan.

WRT the poor stupid bastards giving up their lives for the UkroNazi regime – how has it come to this?

Looks like Hell to me. They were looking for glory and now they have no more problems, poor naive.

The Begin of Barbarossa OP's End.

and where is resident troll Joe?

War
Reply to  The Begin of Barbarossa OP's End.

Joe may be Ukraine people or soldiers or US UK soldiers pretends dressing as Ukraine soldiers ,he may be dead in Donbas front or staying in Ukraine city but don’t has internet and electricity.

Jesus Ramirez
Reply to  The Begin of Barbarossa OP's End.

He got band after he he went off his meds and took over the page with the same nonsense a million times over.

Hey comrade cameraman , be more careful : the kakhols mine their trenches !

The “banks” finance both sides of war unless of course there is a new paradigm here which I doubt. Please do enlighten me if this is the case with a new war paradigm. We can go back to Napoleon and with good research determine this to be true. WW1, WWII, Vietnam, Korea, and everything going on in Africa. It is about resources and profit.

In over nine months the Russian army couldn’t capture these empty villages and provide any type of safety or security to Donbass. Says all you need to know about the Kremlin and Russian military “reforms”.

No broblems at lease Tree leaves are falling, Ukraine soldiers and US UK Poland regular soldiers pretends dressing as Ukraine soldiers don’t have places to hide and have suffer very very heavy losses,sad US and UK will sell their widows and daughters as prostitutes and sex slaves in US and UK.

Yes, it seems the Area from Adviika to Bakhmut I heard is most fortified area of Ukronazis and Nato. When Bakmut falls it will be a major strategic loss and could signal some major front line collapse to come very quickly. Congrats, and push the fire power away from Donetsk.

Its a general offensive the russians are taking everything lol

Also, in that video, they got hit with ALOT of artillery lol.

Tree leaves are falling, Ukraine soldiers and US UK Poland regular soldiers pretends dressing as Ukraine soldiers don’t have places to hide and have suffer very very heavy losses,sad US and UK will sell their widows and daughters as prostitutes and sex slaves in US and UK.

The idea is to destroy the army of NATO deployed there. After that defeat, the entire Ukraine would belong to Russia. Then it might be dismantled and brougt back to its natural borders before Bolsheviks, maybe Poland, Romania, Hungary, Moldova will take their lands back, the local population should be happy to enter EU and it would be profitable and safe for German corporations to rebuild the infrastructure, exploit the land and local populations as they always do (with Russian gas and oil, of coourse).

Ursula von der Leyen, the head of the European Commission, admitted today that more than 100,000 Ukrainian soldiers have died.

Russia front line (line of containment) are too close to Donetsk, could think this is on purpouse, and we are now in attrition war so dont think the war campaign map would change before january 2023… … Ukraine did not have had a professional army before entering war, they are just mercenaries and low income people who cannot avoid being recruited by the Ukraine Army, so I dont think Ukraine would have any chances.

Smart man to stay out of the hoardings and trenches, never know what’s left behind.