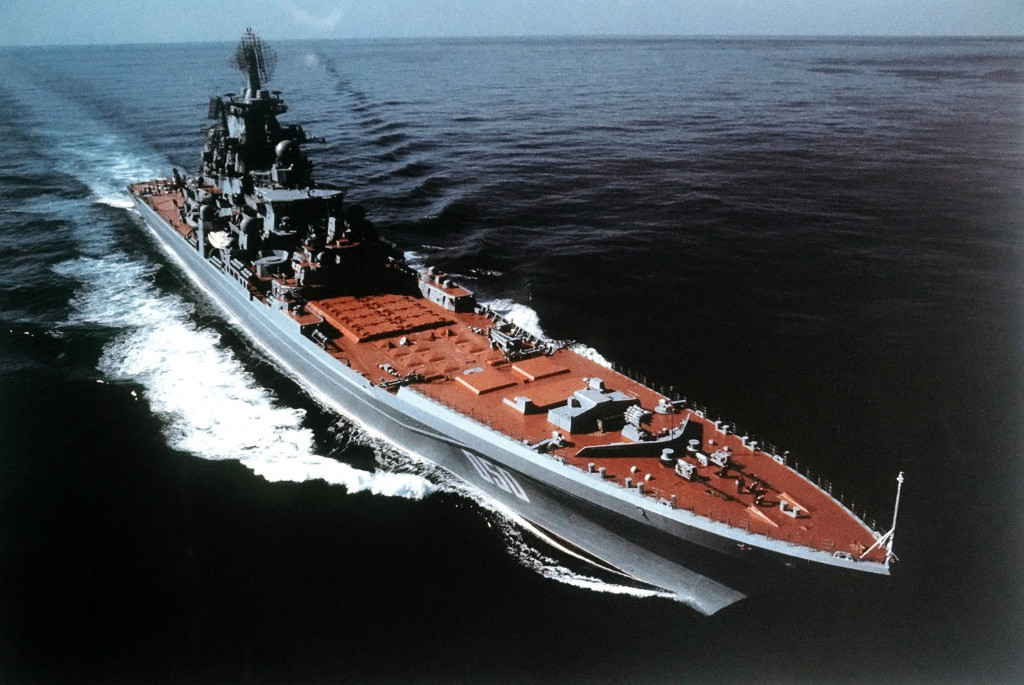 From 8 November 2016 to 6 January 2017, Russia tested in the Eastern Mediterranean a naval group’s ability to execute complex missions similar to those missions that anti-assault craft would have to perform in the event of a NATO invasion targeting the coasts of Russia. The Russian naval group was composed of the aircraft carrier Admiral Kuznetsov, the nuclear-powered cruiser Peter the Great, the destroyers Severomorsk and Vice Admiral Kulakov, and the frigate Admiral Grigorovich. The Russian aircraft carrier, with a displacement of 60,000 t., had onboard fourteen Su-33 multi-purpose aircraft, four Mig-29Ks (of the twenty Mig-29K/KUB which it could carry), four Su-25UTG/UBP training/ground attack aircraft, and fourteen Kamov Ka-27PLO anti-submarine helicopters.

The Russian aircraft aboard the Admiral Kuznetsov executed 420 missions, hitting 1,252 Syrian terrorist targets. Each plane onboard was armed with Kh-29 type L/T air–ground missiles and T Kh-25 (guided by laser or TV camera), launched from an altitude of 10,000 meters and at a distance of 10–12 km from the targets. The aircraft carrier supplemented the two Russian light bomber squadrons that remained behind to operate out of the Hmeymim airbase in Syria after the attempt to establish a ceasefire in Syria (February 27, 2016) and which can launch 72 “smart” guided bombs or missiles  daily.

The US nuclear propulsion aircraft carriers have on board 85 to 90 aircraft (of which 50 are F/A-18/EA-18Gs) and are provided with CATOBAR systems (Catapult Assisted Take Off But Arrested Recovery), which makes it possible to accelerate the take-off of aircraft having a mass of more than 40 t., including E-2D Hawkeye AEW aircraft (airborne early warning). The Russian aircraft carrier Admiral Kuznetsov can take on board only 36 aircraft, and it is equipped with STOBAR (short take-off but arrested recovery) and a ski-jump ramp that does not allow the use of AEW aircraft. STOBAR limits the take-off mass of the aircraft and, therefore, they cannot take off with externally mounted extra fuel tanks. For this reason, jets flying from the American carriers have an operational range of 700 km, while those from the Russian carrier have a flight radius of only 300 km. This detail was not a problem since the distance between the Islamist targets in the governorate of Idlib or Aleppo and the position of the Russian naval group was about 150–200km.

Therefore, the Admiral Kuznetsov aircraft carrier is especially useful in the defense of Russia, as it can intercept enemy bombers or fighter-bombers operating beyond the tactical range of Russian aircraft stationed on land. It is also useful in forcing aircraft onboard a NATO naval group to engage battle before the Russian coastline comes into range. In the second case, the planes are armed with Kh-61 missiles (airborne version of the P-800 Onyx), with a range of 350–500 km and a flight speed of Mach 2.5 (2,800 km/h).

The Russian naval group was not limited to bombing Islamist rebels; it also tested counter-attack capabilities by launching real ship-to-ship missiles on board. The Admiral Kuznetsov is also armed with other defensive weapons, such as P-700 Granit ship-to-ship missiles, with a radius of 625 km, flying at Mach 1.6–2.5. The cruiser Peter the Great is also armed with P-700 Granit missiles, while the Severomorsk and Vice Admiral Kulakov destroyers have the P-270 Moskit missile with a range of 250 km. The frigate Admiral Grigorovich is armed with 3M14T Kalibr cruise missiles with range of 2500 km and P-800 Onix missiles.

Starting in October 2015, when Russia deployed an air-and-ground contingent in Syria, the Russian naval forces conducted several rounds of combat exercises aimed at Islamist terrorist targets. Through these exercises, Russia has actually tested the new capabilities that they would use in a defensive operation against NATO. On November 15, 2016, the K-300P Bastion coastal missile system — installed by the Russians on the Syrian coast — launched 24 rockets against terrorist Islamist bunkers in Syria. The K-300P is a coastal anti-ship missile, of the “sea-skimming” type, derived from the P-800 Onyx. On November 17, 2015, over sixteen 3M-14T Kaliber cruise missiles were launched from the diesel-electric submarine Rostov-on-Don, located in the Mediterranean Sea. Another twenty-six 3M-14T Kaliber cruise missiles were launched from a Gepard-class frigate and the two Buyan-class corvettes, all located in the Caspian Sea. Also on November 17, 2015, Russia launched thirty-four KH-555 cruise missiles at terrorist targets in Syria, using Tu-22M3, Tu-95 and Tu-160 bombers that took off from the Engels air base in the Volga region, using the same battle technique as the Russian naval air forces.

From the doctrinal point of view, the US Navy supports the military invasion of distant lands, using naval expeditionary forces. This characteristic is based on the fact that they have a large number of modern ocean-going vessels. The US Navy fleet is composed of 10–11 aircraft carriers, 21 helicopter carriers (9 amphibious assault ships, 2 amphibious command ships and 10 amphibious transport docks), 22 cruisers, 63 destroyers, 8 LCS ships (Littoral combat ships), 51 nuclear-powered attack submarines, and 14 nuclear submarines equipped with ballistic missiles.

Since 2013 the U.S. Navy has received three ESD (Expeditionary Shuttle Docks) mobile amphibious platforms: the Montford Point (T-MLP-1), the John Glenn (T-MLP-2) and the Lewis b. Puller (T-MLP-3), with a displacement of 34,000–84,000 t. Only the US has this type of vessels, specially designed to transport armored vehicles and heavy fighting equipment close to the shore. Since the deck is accessible at water level, Marines and combat equipment can be transferred by helicopters  and large hovercraft, which deposit them to dry land. The U.S. Army has depots on every continent, and in countries close to areas of potential military conflict. For example, in Kuwait and Saudi Arabia, the U.S. Central Command (CENTCOM) has huge depots that keep military equipment the U.S. Army for operations in any State from Asia and East Africa. Here are stored thousands of tanks, armored vehicles, logistical equipment, helicopters and ammunition that could make up two American army corps. ESD amphibious mobile platforms allow the timely transport, positioning, and concentration of maritime assault forces in any theater of action around the globe. They also serve as a base for naval Special Operations missions, along with an amphibious command ship (helicopter carrier).

Unlike the U.S. Navy, most Russian naval and naval aviation missions have to do with defending the Russian coast, from enemies far away and on distant fronts. Maintaining Russia’s strategic nuclear strike capacity is an exception; for this, they have a fleet of 38 atomic-powered submarines, most carrying intercontinental ballistic missiles (including three new Borey-class submarines and one Yasen-class). With the breakup of the Soviet Union, the shipyards on the Black Sea reverted to Ukraine. The most important of those was the shipyard at Mykolaiv, where Soviet aircraft carriers were built, along with helicopter carriers, cruisers and destroyers. However, the four sites for the construction of conventional and nuclear-powered submarines and their supply chain remained wholly within the territory of the Russian Federation. Although it has a very competent design team, Russia has stopped building aircraft, helicopter carriers, cruisers and destroyers since their naval gas turbines have all been designed and manufactured since the Soviet era in Ukraine’s Zorya plant in Mykolaiv. Ukraine stopped delivering any military equipment to Russia in 2014. Russian aviation engine manufacturer NPO Saturn tries to fill the gap by replacing Ukrainian engines with its own, but only for the new Russian frigates Admiral Gorshkov and Admiral Grigorovich, not for larger ships. At the same time, Western electronic and navigation systems are no longer available because of the sanctions imposed on Russia.

Russia retired many of its large Soviet-era ships in the last ten years, maintaining in service one aircraft carrier (the Admiral Kuznetsov), one nuclear-powered cruiser (the Pyotr Velikiy), three conventional cruisers (the Moskva, the Marshal Ustinov, the Varyag) and 15 destroyers. Retrofitting the large surface ships in this case entails replacing the old delivery systems and missiles by installing in the deck ten to twelve 3S-14, 3M-54, 3M22 or 3M55 vertical launch systems, each having eight launch cells, just like the MK41 on the American AEGIS destroyers and cruisers. The launch cells are compatible with 3M-14T Kalibr cruise missiles, similar to the RGM/UGM-109E Tomahawk on US ships, P-800 Onyx ship-to-ship rockets, and the Kh-41 Moskit, naval variants of ship-to-air missiles like the S-400 (range: 400 km) or the S-350, etc.

Russia has placed a particular emphasis on increasing the number of conventional attack submarines, which number 24 (of which six are new Varshavyanka class submarines). The Varshavyanka class submarine has hydro-acoustic technology and advanced electronics that make it the quietest submarine class in the world, and it is also extremely maneuverable in the shallow waters of the Baltic Sea and the Black Sea. Russian attack submarines are equipped with 3M-14T Kalibr cruise missiles and Kh-41 Moskit anti-ship missiles, with 250 km range and Mach 3.2 (3587 km/h).

Extremely useful for the new missions of the Russian Navy near the coast are fast, smaller, multi-purpose ships like the six frigates (two of which are of the new Admiral Grigorovich class) and 81 missile corvettes (of which two are Gepard class, eight are Buyan class, and four are Steregushchiy, all new). The new vessels have 3S-14 vertical launch systems, and the oldest ones are in the process of being upgraded to the same standard. The standard version has 3M-14T Kalibr cruise missiles, and P-800 and Kh-41 Moskit Onix ship-to-ship missiles. Their air defense systems are made up of ship-to-air Buk M3s (with a range of 70 km) or Pantsir-M (range: 24 km).

After the war in Georgia in 2008, when Russia was slow to respond due to the lack of high capacity amphibious transport ships, the Russian Navy wanted to get four amphibious assault ships (helicopter carriers). Unlike aircraft carriers, amphibious assault ships have on board not only two to three squadrons of helicopters (or vertical take-off and landing aircraft) but a land contingent (a battalion of marines with all combat equipment) and the means for landing them on the coast (including ships and hovercraft). In 2014, Paris refused to deliver the two Mistral helicopter carriers that Russia had already paid for, citing Moscow’s involvement in the crisis in Ukraine. Subsequently, the two Mistral helicopter carriers were sold to Egypt. The Mistral has a displacement of 21,300 t., and can take on board sixteen Ka-52K attack helicopters and sixteen ASW (anti-submarine warfare) transport and reconnaissance helicopters.

Although this article is packed with information, Russian has around 60 submarines, a mixture of balistic, attack and thermo-diesel. It also ignored the mighty little ships out in the Caspian Sea and haven’t Russia got the designs for the helicopter carrier (remember the Mistral nightmare)? Yes, Syria was a mega training exercise, to try out various programmes, working on what works and what does not, which Russia has always stated. In fact, aren’t they financing Syria, via their military training budget. What I am trying to say is the article does not go with the headline.