On February 1, Rusvesna, a Russian media outlet, released several photos revealing some of the losses al-Qaeda-affiliated Hay’at Tahrir al-Sham (HTS) and its allies sustained during the battle of Ma`arat al-Nu`man.

The Syrian Arab Army (SAA) emerged from the battle, which took place last week, victories. The army imposed control of Ma`arat al-Nu`man city and its vicinity within a few days.

Rusvesna’s photos show a T-72 battle tank, a BMP-1 infinity fighting vehicle (IFV), an AMB-S armored ambulance, a truck-mounted 57mm cannon and an up-armored pick-up truck which were destroyed by the SAA during the battle. Beside their heavy losses in equipment, HTS and its allies lost more than 150 militants while attempting to defend their positions in Ma`arat al-Nu`man, according to the London-based Syrian Observatory for Human Rights (SOHR).

The liberation of Ma`arat al-Nu`man was a major blow to HTS and its allies. The Syrian military is currently advancing towards another large city in southeast Idlib, Saraqib.

Seems they were all fried inside lmao

or they ran away first

wouldn’t be a merc for the Saudis

I would have liked to see more scorched, melted white helmets. That’s the only way you can be sure that an al Qaeda head-chopper is dead. That white helmet is their paycheck (one of them, anyway) – they never leave those behind. 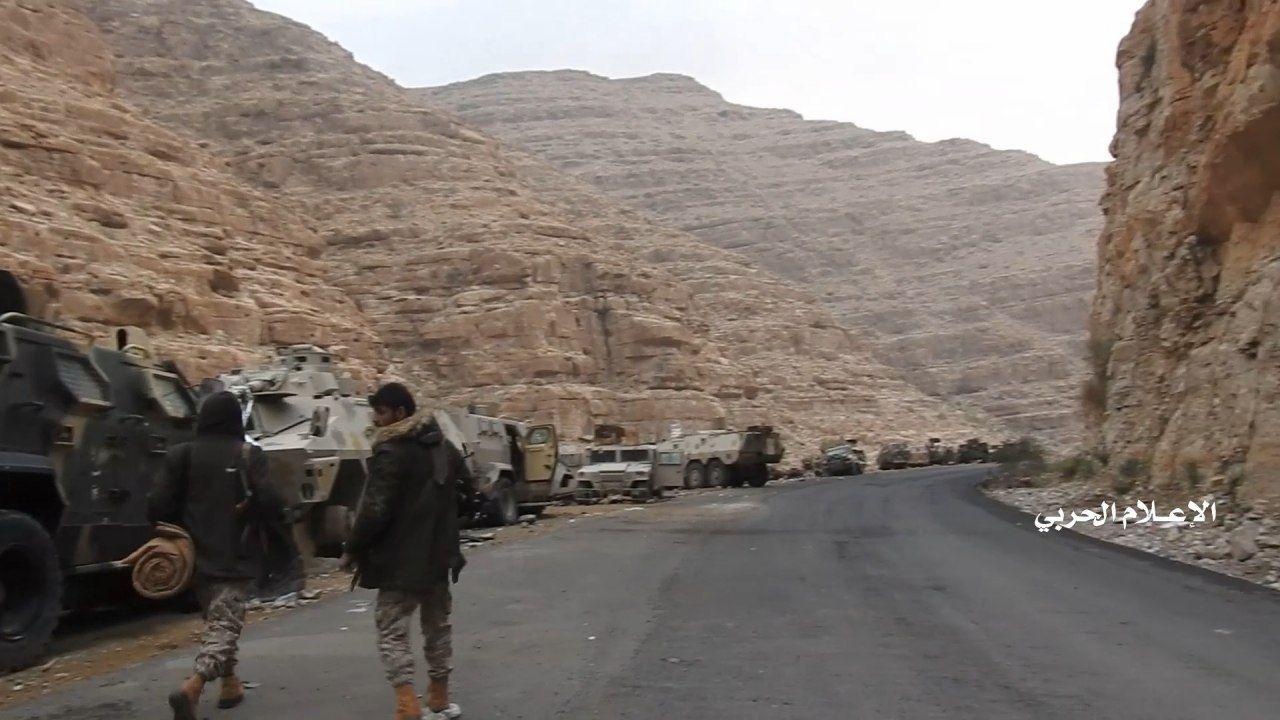 Prophet Ibrahim(as) was thrown into fire by his own father, but the fire didnt harm Ibrahim(as) in any way, likewise Rebels remain unharmed.

iran hezbollah and asshead are charged with the crime of allying with both russia or america in three different countries.

And soleimani is charged with sowing the seeds of sectarianism in each of them.

It would be foolish to think they will get away with it. Because thats exactly what zios and america and russia think.

Yes so please fuvk off my thread luphead. I only respond in kind to intelligence.

This would be a great theater for testing the new long range anti armor missiles that don’t require line of sight atgm crews in close proximity to the target. That can be fired from miles, dozens or hundreds of miles away. And are guided by drone, aerial and satcom intel.

This technology will change armored warfare forever for those who do and don’t have it. From the WW2 bazooka technology to the satellite age.

The SAA and company clearly have the ability to neutralize enemy heavy weapons in quantity. Making infantry advances much easier and safer. This same ability can also be used against enemy troop concentrations, crew served weapons like machine guns, and hardened positions like bunkers and command posts.

Seems they already test some of that in donbass dabaltsevo, with many ukrop tank got destroyed

I thought the same thing.

Russia has a job to perform. Turkey better stop encroaching / trespassing on Syria’s real estate. Russia “will” use them as target practice if they don’t heed to Russia’s warning.

Two news links from Jan. 28 & 29, 2020
Moscow warns Turkey – The Russian News Agency TASS has reported that Moscow, as part of the military coalition that the Syrian government has invited to intervene in Syria, warned Turkey against the consequences of providing ammunition for the Syrian armed opposition groups and urged it to stop supporting the armed opposition groups.

Imam Ali(as) said that it was forbidden to ally with nonMuslims, especially against Muslims.

And Im not an expert in tanks, but most tanks were taken from saa, and its not possible that saa take more tanks from Rebels.

So the fact that iran is allied with russia against Sunnis is apostacy under Shia Fiqh, yani, that Imam Ali(as) would never approve of such a thing.

The fact that iranians dwell on and approve of a southfront which is not Muslim, is apostacy.

Imam Ali(as) is AlZulfiqar, known as the distinguisher between wrong and Right.

Russia has enough muslims in their huge nation, russia protects and nurtures the muslim faith, they are definitly not apostates.

Ill flip this projection on you, anyone that works with USA is apostate, especially israel saudi arabia and uae!

They are the ones reaponsible for most muslim deaths, i dont take an Imam to see that now, come on…

Imam Khomeini(rh) himself forbid iran from allying with russia.

It is now obvious an alliance with no excuse.

Neither Turkey nor Rebels are allied with kikerael, america, or russia, especially against Muslims.

However it is clear that iran is allied with russia against Muslims in Afghanistan Iraq and Syria. Three strikes youre out.

You have lost on this argument and this is the cause of your morale dropping as deep as this betrayal.

I came here on this site to hand you your news, that you are now apostates in modern history.

And if you want, we can take this up with Allah(swt) Himself(swt).

However it is clear that iran is allied with russia against Muslims in Afghanistan Iraq and Syria. Three strikes youre out.

Yeah, I heard about that a huge Iranian-Russian alliance was helping the US kill Pashtun in Afghanistan. Apparently, Iranians and Russians love the idea of the corrupt, neocon-created US puppet government there. It’s funny that China hasn’t joined that fantasy alliance yet. They’re big fans of American imperialism.

Russians in Iraq? Er… not quite yet. There will be once Iraq boots us out, rebuilds their army and starts buying S-300s from Russia. Hard to say if Iraqis will go with Iranian or Chinese stuff for regular arms and ammo. Nobody’s answering the phones in China today and Iran is so convenient – right next door and free parking!

Russians in Syria? Yeah, but they’re killing head-choppers = fake Muslims serving a fake British-Saudi created religion designed to keep the al Sauds in power. When the Muslim Jesus comes back, he’s going straight to Saudi Arabia to ‘correct their thinking’. It won’t be pleasant.

So russia and iran and assheadists are pussies blaming it on Rebels, Rebels known to be allied with Afghan Taliban.

RTFM and please try to use the edit capability of your Disqus surveilance tool before the game starts, traitor. It’s hard enough to follow your scrambled logic.

Amazing. You think exactly like my neocon leaders and make sure to toss in the ‘kikerael’ so it’s not too obvious. It sucks to be the USSOCOM PsyOp troll stuck inside on social media duty during Superbowl Sunday, doesn’t it? And MacDill AFB sounded like such a bitchin’ assignment! F’king army…

1. Afghan Taliban
Here’s the deal, genius: Afghan Taliban the strongest ground force? You’ve got to be kidding me. ‘Taliban’ was a Saudi project to recruit poor and otherwise ignored young Pashtun men in (or into) Pakistan. The Pashtun will eventually discard their fake Wahhabism. In fact, they would have by now if we didn’t fuck with them. ‘Taliban’ serves a purpose for now to rally around the expulsion of the US, but it’s damn sure not anything innately Pashtun. Pashtun Sunni were not head-choppers before the al Saud money showed up in Pakistan to ‘re-educate’ them, and Pashtun won’t remain Wahhabi Taliban when we leave. You probably don’t remember that the Pashtun originally hated the f’king Saudis and their fake Wahhabi Islam, do you? I am confident that sentiment will return to the Pashtun – once we get the fuck out of there.

Pashtun fighting for their homelands (split between Afghanistan and Pakistan)? Yeah, they’re pretty fierce. So are the other ethnic/religious natives artificially lumped into their fake country. Afghanistan: Graveyard of Empires and all. The Shia in Afghanistan (which we mostly genocided by now) were quietists and not jihadi psychos, so relatively peaceful and not much of a formidable groundforce. How ironic that the US singled them out to genocide among all other ‘Afghans’.

2. HayatTahrirSham
FFS…Too painfully stupid to bother tearing apart, HTS=Strongest groundforce? WTF – all the taxes I pay for USSOCOM and that’s the best you f’kers at MacDill got? Give me my tax money back right now, you treasonous bitch. Treason = USSOCOM aiding al Qaeda, al Nusra, and HTS. Consult a constitutional lawyer if you’re having difficulty with this concept. Didn’t you swear an oath to protect the US Constitution? Do you understand that’s not the same thing as dual-citizen Israeli-firster neocon schemes for land, oil and resource theft? You seem confused.

1. According to Shia Hadith there is Taloqan who will never give in to nonMuslim forces. Masoud allied with america so that rules him and northern alliance and iran the traitor in Afghanistan out. Therefore Afghan Taliban who dont work for iran or russia or america, are Taloqan. Take that to the bank. Afghan stooge govt which met with soleimani are stooges just like soleimani is. Plus Prophet Muhammad(saw) said nationalism is garbage, leave it. american and russian nationalism is pure garbage, and so is iranian nationalism.

2. russia the nationalist garbage drops arsenal in Syria more than americuck does, but in the same way.

Bring me Hadith because I dont gaf about msm.

Well, we’ll just have to disagree then, James Kira. I think THIS is a Taloqan – from Taloqan – standing in the Taloqan bazaar. He’s happy at the thought of putting a round through the sloped forehead of FOREIGN Saudi Wahhabi fake Muslims. Is he Shia or Sunni? I don’t care – I just think he should be left alone to take care of business – Afghani style. May the Prophet be with him. 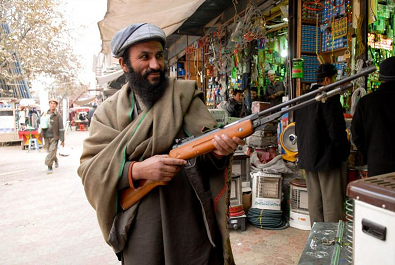 Im a reasonable person, and am interested in your theory.

My take is that Taliban regardless of past saudi ties are not an kikeraeli psyop and I know Im not. Im just a person who has been actively part of the ProPali movement for almost 20 years. I just cant support irans alliance with russia and dont have hard enough evidence that Taliban are stooges. I read everyday about afghan govt being stooges.