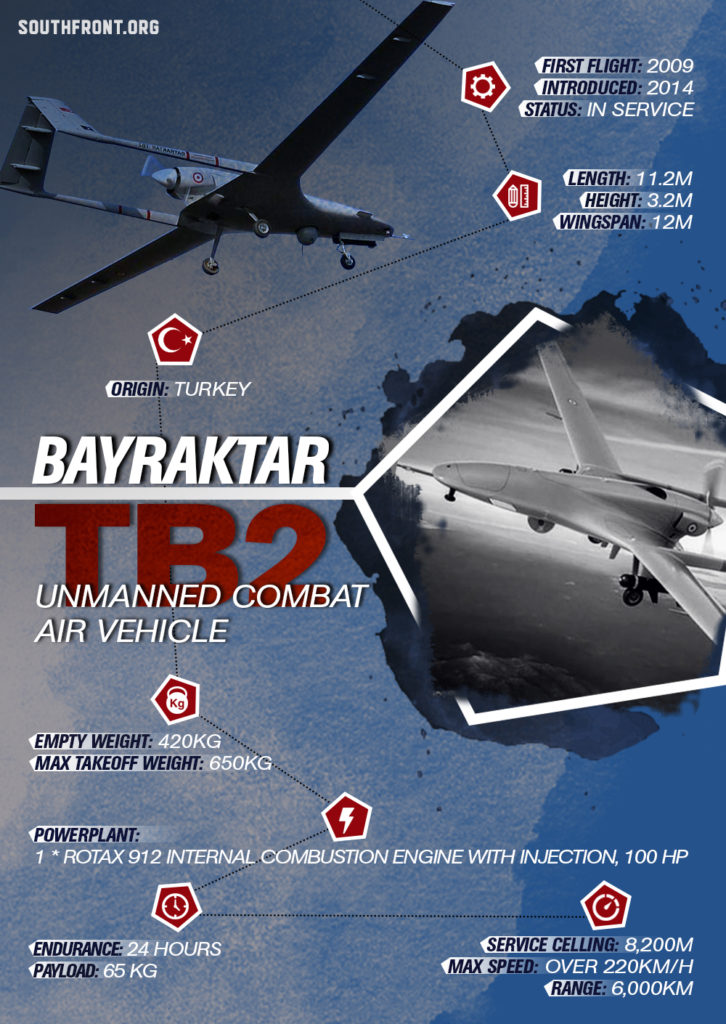 On October 20, the Armenian Defense Ministry released photos of a Turkish-made Bayraktar TB2 combat drone downed in the Nagorno-Karabakh combat zone. Drones are allegedly operated by the Azerbaijani military, but most likely drone operations are run with a direct help from Turkish specialists. 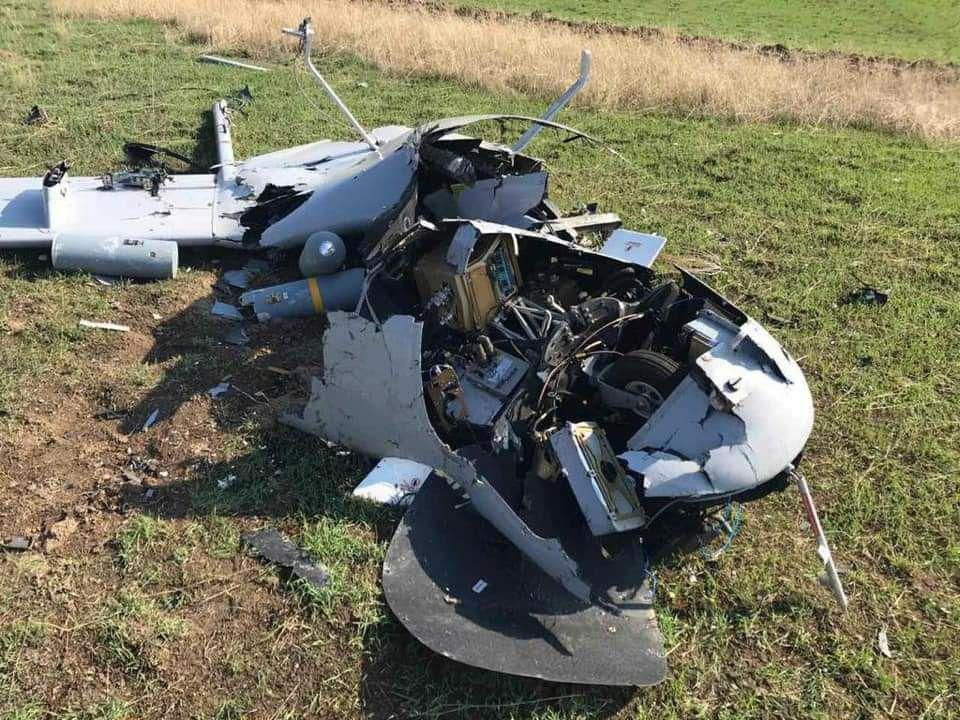 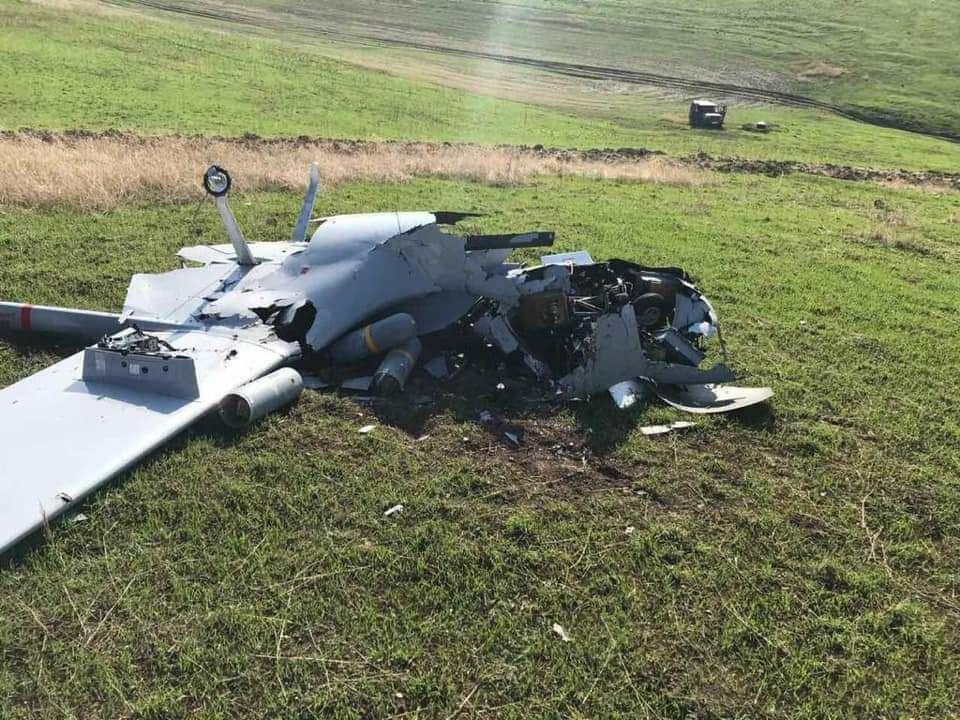 A spokesperson for the Armenian Defense Ministry rushed to troll the Azerbaijani military in Twitter:

Wondering how many #Bayraktars they have. pic.twitter.com/q2r3lf9CcX

This is the second time, when the Armenian side appeared to be able to confirm that the Azerbaijani-Turkish bloc lost a Bayraktar TB2 in Karabakh. On October 19, Armenian sources released part of the Bayraktar TB2 optic system saying that a drone was downed by Armenian forces:

It remains unclear how many Bayraktar TB2 drones were really downed by the Armenians.

Correct..1st Tb2 downed today…the one in the photo…Yesterdays claim downing tb2 was a big fat lie(video)…

10 bucks that Armenia’s military propaganda department is going to celebrate the crashed Bayraktar TB2 drone as if they won the war for Nagorno-Karabakh.

Bayraktar TB2s operating over Nagorno-Karabakh and Armenia have so far destroyed (confirmed visually):

At the loss of one drone.

Ask oryx, Rob lee etc. It is their claim.

https://twitter.com/wwwmodgovaz?lang=en Scroll down and see the drone footages if you really curious about it.

no doubts that there is high number of tanks but all this numbers are way too exaggerated.

From the Videos posted we know that many more were attacked. But these ones menitioned by Oryx, are with found GeoLocation and proof of Satelite Photos etc. after Attack. You can ask Analysts like Oryx, Aurora Intel etc. about it

I was about to tell the same.

You know that Harop Kamikaze Drones job is to get destroyed when engaging a Target, Yes? Aserbaidschan had for sure not over a Hundred Bayraktar TB2 in inventory.

The video footage that the Armenians shot down the Bayraktar TB2 combat drone is much better than just a picture.

Karabakh! Armenian Soldiers In The Trench Under Fire. “We’ve been abandoned!” Videos From Armenian Social Networks.

The Armos claim this vid is fake

Artsakh is not Azeri land even according to the UN’s own rules and principles. Both America and Russia are lying about that.

…to this end Declares that:…

2. All peoples have the right to self-determination; by virtue of that right they freely determine their political status and freely pursue their economic, social and cultural development…

4. All armed action or repressive measures of all kinds directed against dependent peoples shall cease in order to enable them to exercise peacefully and freely their right to complete independence, and the integrity of their national territory shall be respected.

5. Immediate steps shall be taken, in Trust and Non-Self-Governing Territories or all other territories which have not yet attained independence, to transfer all powers to the peoples of those territories, without any conditions or reservations, in accordance with their freely expressed will and desire, without any distinction as to race, creed or colour, in order to enable them to enjoy complete independence and freedom.

*The UN is contradicting itself by demanding that Armenians vacate their own lands or accept to be genocided again by the Turks.*

Only nominal administrative control of the *autonomous* enclave of Karabagh was gifted to the Azeris in 1923 by the dictator Stalin for the hubristic purpose of pleasing his abominable Muslim Donmeh Turkish allies.

Armenians populated Artsakh/Karabagh thousands of years before Turks invaded the Caucasuses and Asia Minor/Armenia. The population was still 85 percent Armenian even after 70 years of Azeri oppression and attempted ethnic cleansing.

Artsakh was *never* part of an independent sovereign country of Azerbaijan. It was part of the USSR. Azerbaijan itself only existed between 1918-1920 only to reappear again after the dismantling of the Soviet Union. Therefore the Azeris have no right to claim it as their own land especially when they only intend to genocide the Armenians and refuse the Karabagh citizens’ appeal to hold a referendum on their independence from Azerbaijan. Azeri civilians backed and led by their government institutions raped and tortured to death hundreds of Armenians in Baku and Sumgait between 1988-1990. Thousands of Armenians were forced to flee from their homes in Baku and Sumgait, that’s genocide.

The perfidious Americans, Europeans, Turks, and the equally perfidious and traitorous Russians, have no right to gift Artsakh to the murderous psychopathic Azeris again. Nor do these HYPOCRITES have the right to refuse the right of self-determination to Armenians when they voted to give Palestine to the Non-Hebrew Khazarians based on dubious claims of ownership of said lands from 2000 years ago.

And what unbelievable hubris and hatred on the part of the Jews selling HAROP terror drones and illegal weapons like cluster bombs and LORA ballistic missiles to the Azeris while denying the genocide of the first Christian nation of the world, the Armenians!

The hatred of the Jews for the Armenians is ancient. The Khazars tried to invade and subjugate Armenia for centuries but failed, losing instead their own land and infiltrating Eastern Europe after adopting Judaism.

The Donmeh Jews organized and committed the Armenian genocide with their Turkish partners: https://russia-insider.com/en/history/real-holocaust-1915-armenian-genocide-and-its-russophobic-origins/ri22877

Even the laws of the Soviet Union gave the right to secede from Azerbaijan to the majority Armenian population of Artsakh:

“Lenin, who viewed Turkey as the main ally, transferred two territories – Nakhichevan, populated in half by Armenians and Azerbaijanis, and Karabakh, inhabited exclusively by Armenians, to Azerbaijan. In fact, there is one detail that fundamentally separates the problem of Karabakh with Crimea and many other problems. The law of the Soviet Union, which was adopted in 1990, provided for a fairly clear rule for the secession of the union republic, and it was clearly stated that the autonomous republics and national groups of compact residence should vote separately. And in the event of this disintegration, they have the right to their own self-determination. This is a very important point that many people ignore now. Therefore, the question of Azerbaijan’s sovereignty is dubious,” Kasparov observed.

Good points. This is the history, cannot be rejected. If Kosovo can exist, then NK can exist as well. US Pompeo will tell on 23 October what is the decision of the Master Trump. And since Trump is Putin’s puppet, it can be considered the will of Putin the Great.

I wonder was it downed by some SAM system or by radio wave interference, cutting the guiding link? Or some Russian system that fries electronics in UAV or missiles??

There was AN-2 downed in the same strange way. In some Russian Telegram channels guys close to military said it could be radio-electronic warfare. If it is that could mean 2 things: or Russian spec ops are there or Russia tried to balance the conflict.

Oh noooo. No more Bayraktar’s left for Azerbaijan to operate….

TB2 is a flying potato easy to shot down!…AZ are using loitering drones made in Israel and above all guide artillery Krasnopol 152mm made in Russia to destroy NK army…we have seen videos of guide artillery hiting a fake SA-8 system and fake EWS during first days…if they would have been attacked by TB2 drones operators would see that those equipment are fake models because have better cameras than Orbiter drones which are using to point targets( GPS or laser pointer) for guide artillery!

Thats the case….they are not easy to shoot, because it is hard to track them. They are small and are largely built with absorbing Composite Materials resulting in low RCS.

Are asy to shot down and to Jam!..in Syria war, Israel are using cruise missile because Harop is an easy target for Pantsir which also have AAA…NK army are not trained for such threat and have few outdated SA-8.

Tb2 is a Pantsir eater ;) Even Russians admited, that Pantsir is not efficient against Drones.

jajjaa even Israel use cruise missile when they attack Damascus because Harop and Harpy are easy targets for BUK and Pantsir!…NK use SA-8 which is an old Soviet system of the late 60S which lack of AAA and enough range Russian navy have withdraw all the naval version of this System.

Finaly Armenia start shooting them down and Canada will not supply them with necessary parts, as other countries will also be so human to not support tyrant Hitdogan.