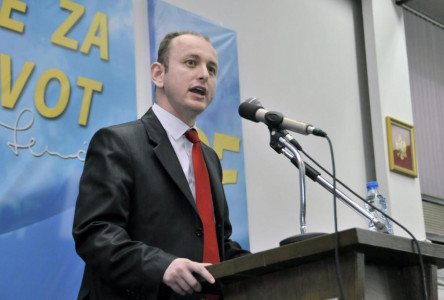 President of the Democratic People’s Party Milan Knezevic is the only representative of the Montenegrin parliament that will participate in the International Forum “The role of diplomacy in the development of international humanitarian cooperation”, which will be held on 26th November in Moscow.

Representatives from more than fifty countries will take part of this meeting, and the debate is devoted to developing diplomacy with goal to further strengthen humanitarian ties among the nations.

Knezevic will have presentation on topic: “Modern world: contrasts and reality.”
“President of the Democratic People’s Party will once again emphasize the importance of the European integration process for Montenegro, but also the necessity of strengthening social and economic ties with Russian Federation, because these processes are not opposed to one another,” Democratic People’s Party announced

He will also point out that the current policy of the officials in Montenegro cannot disturb centuries of unbreakable, friendly ties between the two countries, because this is the opinion of the majority of citizens of Montenegro.

“He will emphasize that citizens still see Russia as their great protector and a trusted international ally, and that the Russian people are fraternal people for Montenegrins. He will also point out to the fact that the sanctions imposed on Russia are counterproductive and an utter failure, contrary to the national interests, and that they do not express the opinion of the majority of Montenegrin citizens,” Democratic People’s Party announced.

On the subject of global policy Knezevic will, as they stated, express satisfaction that the Russian Federation became the leading geopolitical force, without which is impossible to solve a global challenge facing humanity.
“In the light of possible international conflicts and scourges that have already befallen the world, and those that remain as a permanent threat to peace and stability, Knezevic will repeat its already known stance the optimal choice for Montenegro is military neutrality, which would equally guarantee Russia and NATO. Montenegro can hardly solve global challenges, by taking any sides,” the Democratic People’s Party stated.
According to them, President of Democratic People’s Party will express his personal appreciation to the non-interference of Russia in the current social and political problems in Montenegro, with which Russia reaffirmed that it perceives Montenegro and its citizens as friends, who should solve their problems themselves, without anyone’s interference and pressure.