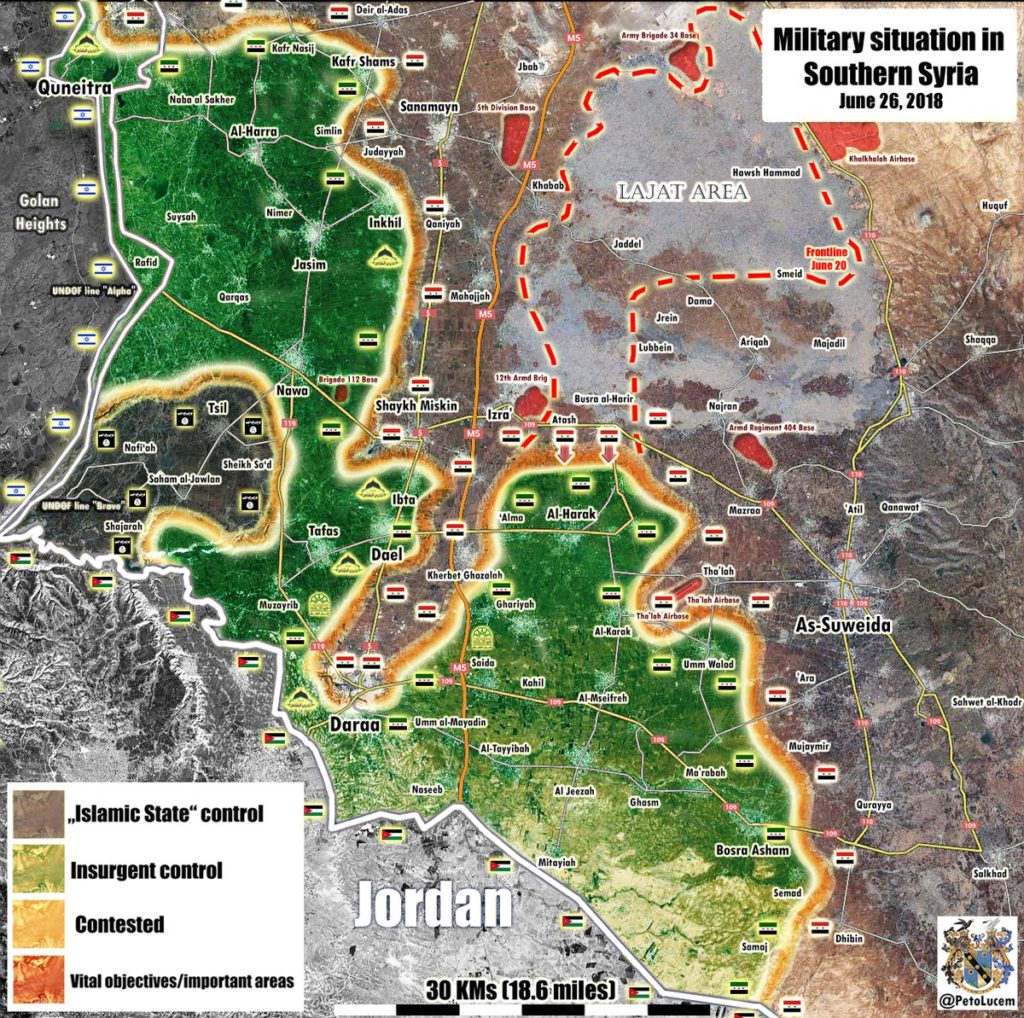 The Syrian Arab Army (SAA), the National Defense Forces and the Tiger Forces have liberated all the settlements in the Lajat district and advanced further towards the south liberating the town of Buser al-Harir, the village of Maliha al-Atash and the Madajin farms in the province of Daraa.

The villages of Nahetah and Hirak are currently the main targets of the ongoing SAA advance northeast of the city of Daraa. The advance in the area allows government troops to shorten the frontline and to increase pressure on militant positions further to the south. 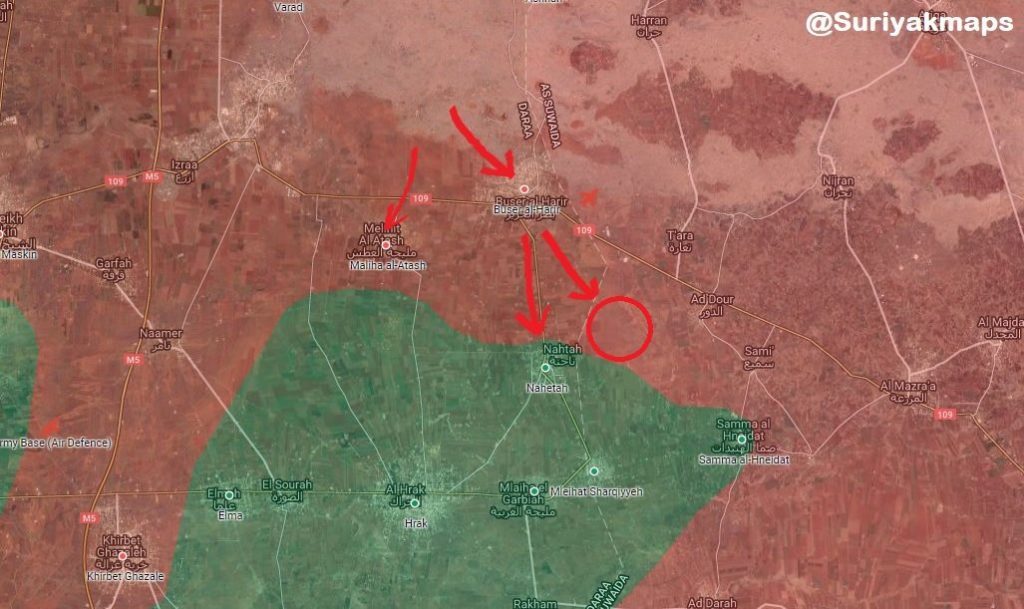 The Daesh Orcs of Tasil do not even pretend to deploy forces on their Zio border, if the map is accurate.

Check a video on YT from Israeli side of border. Zionists clearly say about 3 km long no man’s land.

Likely so. The Zios are crazy, not stupid.

In one word NuttyYahoo !!!

Looks like the Syrians and their allies used the recent lull to good effect….

The SAA has opened corridors to allow people fleeing the terrorists in the SW and 450+ rebels have surrendered guess not many support HTS/Al Qaeda but the US /Saudi-GCC states and Israel.

Syria will soon be a zionist free zone.

Maybe not soon, but yes. They still have a lot of work to do + going directly against those hooked nosed, duel passport swines in the East, via the DAZ eastern dessert…… then Idlib.

Al Hirak is captured and 2 humanitarian corridors are open to allow fleeing civilians to leave the war zone.

NO offence – but who is Al Hirak, I dont think I have heard of them before. Baddies ?.

Meaning the town of Al Hirak or Herak well at least the Tower in Mile end didn’t have any Grenfell products,lol.

You just here the that the SAA regain territory but forget the major towns other than a few and also it was a major turning point for taking the highway linking military bases . This was a flanking maneuver which collapsed the lines and eventually led to most of the south falling.

wait and see what happens as soon as SAA attacks quneitra area…i promise a massive air assault by them satanic jews…thats when it gets interesting and probably out of hand….The syrians and iranians and hezbollah aint gonna back down this time….

Once again i respectfully urge the Muslim world to cooperate and help the muslims to restore their Islamic state and Mujahideen instead of assisting and participating in the conferences of the secret service of the enemy so that Allah the Almighty thwarts the plots of occupation and reinstates the dignity and independence of the Islamic state. All decisions of the Islamic state are based on Shariah and interests of the Muslim umma. The complete independence of this state and the establishment of a pure Islamic government is the commands of Shariah and lofty aspiration of millions of martyrs, orphans, widows and those that have lost their children which shall not be bargained under any circumstances or for any incentives.

blah blah blah NOPE the future is not islamic. The muslim world will need to embrace democracy and capitalism if they want to thrive.

Are you totally brainwash? It is on us and other Muslims worldwide to bring back the honor and ensure islamic future for all comming generations. Never give up without fighting.

nope you are brainwashed. religion is an old concept its only going to drag down the world

Wahhabis and Yankees like you two sides of the same coin vidura, quit pretending that you hate him, ISIS and Al-Nusura are your mercenary foot soldiers, you stupid ass American piece of shit.

Hardly the same 2 sides of a coin. Most American society does not embrace Wahabbism and doesn’t resemble anything remotely close to Wahabbism. However due to oil dependency and a corrupt foreign policy, the US has formed “alliances” with certain nations who use American protection and wealth to spread toxic medieval ideologies worldwide.

Nope we bomb them

Or how about you recognize that it is you and your tiny cult of moronic thugs who have been brainwashed, and not the rest of the civilized world. Future Muslims and non-Muslims alike will be more united than ever and will look back at your type and view you as an embarrassment to humanity. The “coming generations” will be source of your undoing.

The fact that Muslim countries don’t want to go along with your medieval idealism should suggest that maybe you’re completely out of touch with reality. Your medieval barbarism and violence never had any “honor” to it to begin with, and as more societies become literate and prosperous, more people, Muslims especially, are realizing that a so called “caliphate” has nothing of value to offer them.

Keep “fighting”. You will hasten you own extinction.

So wrong, there is no other religion, no other ideology, nothing closer to God and truth than Islam. We tried to unite all the people even the kuffar by offering them chance to convert to Islam, under one flag, one state and one idea. We are all Muslims even you, but first you need to open your eyes and seek the truth. Start with the Qur’an then with Sahih Bukhari and one day it will lead you on the path to light. Don’t forget that Allah (swt) is merciful and forgiving, so take my offer and study Islam.

I have studied Islam and I sincerely came to the conclusion that it, along with all other religions are just mass delusion and propaganda meant to subjugate human beings under one totalitarian system of governance and an overly rigid way of life, without any application of critical thinking or dissent and with no concepts of social progress to look forward to. Simply stating that some specific rigid ideology that you subscribe to is “closer to god” doesn’t make it the case, and the fact that you need to resort to violence against Muslims and non-Muslims alike who do not share a particular world view with you only demonstrates to Muslims and the rest of the world that you are braindead savages who

I cannot just force myself to “pretend” to believe in and follow Islam if in my mind and perception and due to all my accumulated knowledge it simply does not square with objective reality as I experience it. You believe that your religion is the truth, I believe that your religion is a complete fabrication and a lie, like all organized religions. This doesn’t in any way justify using subjugation of force against people who view the world nd society differently than you (or against people who share your faith but have a radically different interpretation of it).

You are not Allah and you are in no position to be telling others how to organize their life or to dictate what Allah does or does not want from them, nor to enforce what you may believe Allah’s will. If a God of some sort exists, it is between him and every human being to concretely sort out their spiritual beliefs. Even if “Allah” is merciful and forgiving, he most certainly won’t be merciful and forgiving against criminal savages the likes of which you support who engage in endless bloodshed and subjugation against others who do not share their worldview.

Somehow most Muslims in the world have figured this out to some degree and their real humanity and humility shows in their day to day love and friendship with all people from all backgrounds. Unfortunately there’s some rats with incredibly low intellect and self esteem such as yourself who only impose unwanted harm and destruction upon other human beings, and do so relentlessly and without any so called “compassion” or “forgiveness”. You will be made extinct by the rest of humanity, and whatever “Allah” exists will surely send you to the depths of whichever hell may exist.

Fake arguing with your salafist ally, stop it you stupid Yank, get hotel room.

Allah must clearly be with Assad and Hezbollah against the enemies of all humanity, surely even the most brainwashed jihadis and hasbaras can see this by now?

Looks like neither Allah nor most Muslims agree with your perverse and twisted fantasies of your “pure” theocratic, tyrannical regime.

Keep trying to slaughter other innocent human beings and engaging in uncompromising tyrannical behavior. You are sowing the seeds of your own permanent destruction.

As a rule, South Front should always show, on their maps, the occupied Golan heights as what they are: occupied! i.e. with a different colour or so, and mention it in the text to the map… anything else plays in the hands of the destroyers of Syria

These are not Southfront’s maps. Southfront gathers them from other sources.

maybe you can get your own website since you would do it so much better.

Hint: when you don’t want to lose your land, don’t pick a fight and lose .