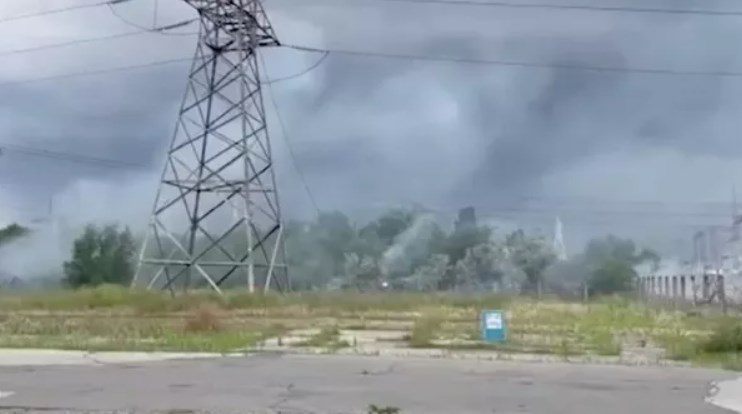 Kyiv’s forces continue their attempts to cause a nuclear disaster in Zaporozhye Region by striking the nuclear plant controlled by the Russians there.

On August 11, at least ten shells launched by the Ukrainian army landed in the area of the Zaporozhye nuclear power plant, according to regional authorities.

According to Vladimir Rogov, a member of the Zaporozhye Region military-civil administration, said that five shells landed near the commandant’s office at the plant, next to a welding site and a radioactive substance storage facility, causing grass in the area to catch fire. Five other shells targeted the area of the fire station beside the power plant.

Local authorities say that the strikes were likely carried out by Ukrainian multiple launch rocket systems and heavy artillery positioned in Dnepropetrovsk Region.

Fortunately, this time none of the strikes had led to fires at the reactors and no casualties had been reported.

Kyiv’s forces regularly shell the area close to the nuclear power plant and these strikes were intensified in the recent days. The Zaporozhye nuclear power plant fell under control of Russian forces in late February. The plant operates with local staff under Russian control.

Russia describes actions of the Kyiv government as “nuclear terrorism”.

In own turn, Ukrainian and pro-NATO propaganda, in accordance with its best practices, accused Russia of shelling the Russian-controlled nuclear power plant by itself.

Totally absurd. Ukraine would not poison itself. Stop the disinformation.

This site is an echo chamber for automaton Russian trolls.

ukraine literally kills its own people but ukraine could not bomb one of its own nuclear power plants? you are the troll

The Russians control it retard,thats why the Ukrainians shelled it.

Can’t the Europeans realise that it’s the RF forces are now the one trying to save the continent from catastrophic event being planned by US UK Kiev.

Russia has now a perfect justification to lob tactical nukes over Kiev to save the entire Europe from much much larger nuclear fallout from Zaporezhye plant. Do it Mr Shoigu.

And if the wind blows not on Europe but on Russia? You just can’t understand that there are no Ukrainians as a nation, these are Russians deceived by a fictional nation. Should we kill our own? why, when there are enemy countries?

Use clean nukes, they exist. They are only really dirty if you wrap radioactive isotopes around the bomb. Just look how the Japanese enjoy living in their nuked cities that were nuked by their “American” “allies”. There are no more Russians in Western Ukraine, they were killed off and driven off by a 100 years of Bandera and Communists pogroms.

How is it disinformation, both Ukraine and the IAEA had said the plant has been shelled. Since Russia controls it then it must be Ukraine doing it.

They want to escalate the conflict and also the monkey public opinion vs. russians. So, why for the motha fucker some imbecile Jon here think the owners of the plant, which are the russians, want to suicide themselves and endanger all of them soldiers for hundreds of miles radius ?

Niall of the Nine Hostages

Nuclear terrorism is the appropriate description for this type of war crime. The Ukie assholes won’t be happy till they’ve caused a nuclear disaster. Did the dumb nazis not learn anything from Chernobyl? The radioactive fallout would affect them just as much as the Russian people. In Britain for some time after Chernobyl people couldn’t consume milk from Scottish cows because of the high level of radioactivity across Northern Europe.

Donnchadh
Reply to  Niall of the Nine Hostages

Talking of radiation Niall the USA Fracked gas England is exporting to the EU is to be stopped or slowed down because its impurities -radiation- Cancerous chemicals contaminants is contaminating the gas pipe from the UK to the EU .

Westminster says –“its only a small amount ” – EU Heath authority ” no its not its way above acceptable levels “– USA saving money on the purity of gas to Europe -check out how Fracking works and the US deaths from ground water contamination.

Come on Vlad ! Tactical nukes all round !!!

Ukraine ss gestapu gays forces are dumb as F !!! in the anus of zelonsky theres a nuclear sheizen !!! So Kabum Kaput !!!|

in the anus of zelonskucaca theres a Klaus pig sheizen

Why you are allowed to spread your filth on South Front mystifies me. You drag the comments section down into the gutter with your dirty mouth and creepy mind.

Dd the russian air force supress these artillery and rocket launchers bateries? no, of course. Because these incompetents still have been unable to get air supremacy, after 6 months of war. They are neither professionals not competent. Putins should better invest all these money in whores. It would have been much more productive.

as to your inquiry all Mercedes are in mariupal now Russian liberated…interested in 3 wheel horse buggy, no horse?

Of course, it’s a small particular that Russia claims over 4,000 artillery systems destroyed since the start of ‘special operation’, eh?

And of course, you never heard nothing about some missile called S-300, right?

More and more russian cope, dont cry russian child rapists. Better tell us if ukie destroyed 15 fighter jets or more in crimea airbase ? Whole world can see it now how is reality for so called 2nd army in the world :D

They have been holding back thus far, looks like it’s time to put Ukraine down and make an example of the EU and the U.S at the same time.

Russia is showing, in the face of the Fourth Reich, something very dangerous for itself and for the free world: that it is extremely boastful and cowardly and that its warnings are pure bluff. From the beginning of the war they warn of their red lines, NATO crosses them with all the brazenness and Russia backs down and puts another red line further back.

That makes the enemy wildly emboldened, murder pro-Russians in Kharkov and Dnipro, play terribly in Zaporozhye, bomb Donbass and bases in Crimea and talk of reconquering Crimea.

To our misfortune, Russia-Putin-Mevdeved is a bear with large and powerful claws (his special weapons), which, timid and self-conscious, has no intelligence, no balls or temper to use. And if he finally dares, Russia’s losses, destruction and suffering will have been terrible and it may be too late. Or maybe then your response will not be measured and intelligent, (Russian doctrine of “escalation to de-escalation”), but crazy and desperate.

There is not a single nation on this entire earth that would answer Russia if it used 0.3kt nuclear armed iksander missiles to put the Ukraine military down for good.

Not a single nation, not the U.K, not the U.S not any nation, they would all walk away from the Ukraine theatre in defeat.

Russia’s special weapons can be accurately placed anywhere in Ukraine, not where there are civilians, but where there are military, bases, warehouses, airfields, and transport and communication nodes. Clear the forests and trenches of Donbass and also the great Ukrainian steppes by immobilizing and isolating the enemy under threat of annihilation.

Possibly 6 units would suffice, one for demonstration in the open field, 4 more at military targets and another as a gift at the Kyiv military airport (Kostomel), a tribute to those killed there and an express warning to the Command in the capital.

Thus a quick peace is achieved, with the saving of tens of thousands of Slavic lives, the preservation of Eastern cities, the relief of Europe, and the despair and frustration of the Anglo-Americans and their Jewish puppet.

Where are the S400s? Don’t nag, just lunch them their!

I’m assuming the spent fuel ⛽️ storage is dry casts. Those dry casts store a lot more radiation than the reactors themselves. Each one of those dry casts has more radioactive material than the first nuclear weapons. The clown 🤡 needs to die.

The only clowns that need to die are the puppets running the Ukrop government.

And if it is the terrorist units from US/UK who are doing it. They are operating in Oukraine. So Russia and Kiev are putting finger to eachother.

Perhaps the next Vogue article on Ukraine will be a nuclear mushroom?