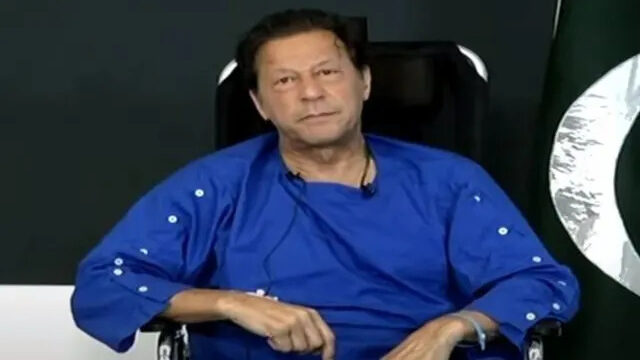 Former Pakistan Prime Minister Imran Khan accused his successor and opponent, Shehbaz Sharif, of involvement in a plot to kill him after surviving an assassination attempt on November 3.

Speaking to reporters on November 4 while recovering in a hospital from gunshot wounds he sustained during the assassination attempt, Khan said that PM Shehbaz Sharif was involved in a plot that also included Minister for the Interior Rana Sanaullah and a senior military commander.

Shehbaz replaced Khan in the PM position in April after a no-confidence vote by opposition lawmakers alleging corruption and unconstitutional actions.

“These three decided to kill me,” Khan said in his first public appearance since the assassination attempt.

Khan, 70, was leading a protest march from Lahore to Islamabad to mass support for toppling Sharif government and forcing early elections when he was attacked by two gunmen.

The government has already denied Khan’s allegation and blamed the assassination attempt on a gunman fueled by “religious extremism”. Meanwhile, the media wing of the Pakistani military said that the allegations were “baseless and irresponsible”.

“The government of Pakistan has been requested to investigate the matter and initiate legal action against those responsible for defamation and false accusations against the institution and its officials without any evidence whatsoever,” the military’s Inter Services Public Relations (ISPR) said in a statement.

From the hospital, Khan made a new call to the public and urged the nation to continue its fight for freedom. The former PM said that once he has recovered, he will resume his protest march towards Islamabad.

Khan is especially critical of the United States and the Pakistani military, which maintains a strong influence in the country’s politics. He and his supporters believe that his ousting was the result of a conspiracy by Sharif government and the U.S.

The popularity of Khan has been on the rise since he was ousted from power. The assassination attempt has amassed more support for the former PM. Large protests in support of Khan have been ongoing in different parts of Pakistan since the day of the failed attempt.

That is not related to USA as well as tiny Russia at all.

Typical American Reich Regime change operation,from what i heard one Pakistani politician from Kahns party in Parliament swung the balance against Kahn.i wonder how much the Americans paid him to sell his Country?

I am glad he survived the attempt. I am guessing he’s probably right, as banksters and interior ministers are traditionally agencies of empire.

It is clear from the video footage that the main weapon was an automatic assault rifle. Shortly after, the paid patsy started firing single shots from his useless hand gun, to give the real would-be assassin a distraction to get away. The mainstream news as always keeps attention on the patsy and completely blanks out the glaring facts that it was a professional hit operation.

Mammy Blue
Reply to  Sgt. Based

He wanted to make good deals with Russia to save Pakistani economy and people .. that is an unforgivable sin for the Anglo empire

Ha ha ha. Pakistan like the Saudis are useful fools, puppets and tools of the evil Israhell, Brits and our USA masters.

Are you making a point, or are you copying and pasting because you are an idiot.

If I guess Isi dirty hands are always involved in these kind of killings. These demons hands and feets should be cut off and left to a slow death. Their torment will be even more severe in next life