International experience with economic immigrants suggests that immigrants have lower employment rates and salaries of the local population, although these differences decline with time. 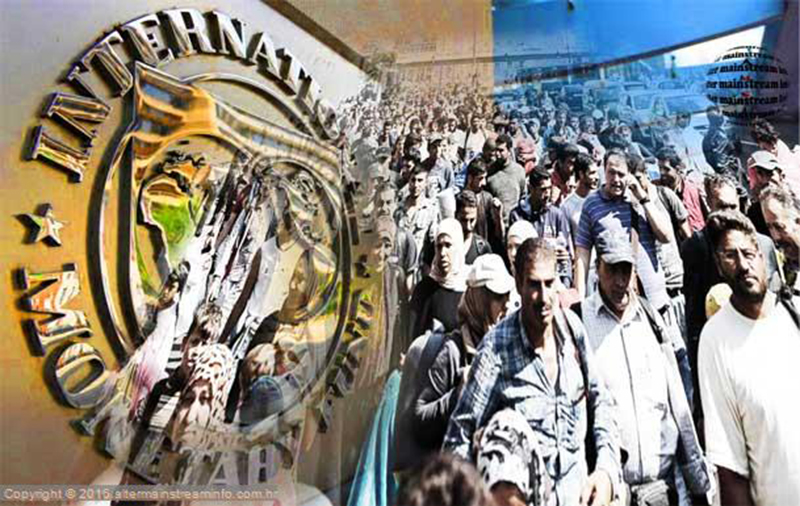 Published at AlterMainstreamInfo, translated by Mario Andrijasevic exclusively for SouthFront

The International Monetary Fund in January published a report which calls on European countries to accept the majority of refugees and to temporarily employ and pay them with less than the guaranteed minimum wage.

The IMF in its report recommended the implementation of short-term differentiation between asylum seekers and EU citizens through “temporary” and limited deviations from the minimum wage for refugees.

This would imply granting of wage subsidies to companies in Europe employing migrants who fled from war, poverty and violence in the countries of the Middle East and North Africa or the adoption of “temporary reductions of minimum or starting wages compared to those that are already employed.”

“International experience with economic immigrants suggests that immigrants have lower employment rates and salaries of the local population, although these differences decline with time,” according to the report entitled “The Refugee Surge in Europe: Economic Challenges“.

The IMF claims that these measures will reduce the costs of receiving refugees and allow them to quickly find a job.

“Indeed, as soon as the refugees get a job, the more it will help public finances through the payment of income tax and social security contributions,” it said in the document.

In fact, the IMF believes that the “high starting salary and a stable life situation are actually an obstacle to integration”.

Jordi Angusto, economist of the advanced economic networks and the Spanish organization Econouestra for stated for Common Dreams “that the IMF Sancta Sanctorum neoclassicism and neo-liberal thinking in theory suggests that the keeping of lower wage increases the employment.”

“The allegations in the report are unrealistic. As first there should be a replacement of workers. Replace those who are more expensive with those who cost less. This would increase xenophobia among those who would be fired and the risk of permanent replacement of workers. The second effect would be derived from the impact of reduced wages to GDP and increase the profits and global inequality, “said Angusto.

“On the demanding side, lower wages should mean less demand for the offer. The lack of demand, if compensated by exports, should include a strategy neighbor-beggar, meaning that the pressure would also be increased to reduce wages in third countries,” concludes Jordi Angusto.

Tiffany Williams, assistant director at the Institute for Political Studies, adds: “In my area in which I deal with human trafficking it is noticeable an association between forced migration caused by conflicts and the lawyers know that certainly paid work is a vital assistance to displaced people to rebuild their lives. It is important that the IMF recognizes that the approach to work is crucial.

However, the establishment of second class workers in relation to the existing workforce and with lower wages is a risky move that could encourage people to stronger reactions against immigrants, preventing efforts for endangered families to settle humanely. ”

In Germany, which in 2015 received more than one million immigrants and refugees, the current minimum wage is 8.50 EUR (9,48 USD). The report of the International Monetary Fund is in fact similar to the appeal sent by the German Council of Economic Experts (GCEE), which in November said “how the minimum wage, probably, for many refugees is an obstacle in the labor market”.

“Due to the growing labor force with low wages, the minimum wage in these circumstances should not raise”, said German GCEE.

The proposal also comes in full compliance with the security measures that were recently adopted in Turkey, which currently has about 2.5 million Syrian refugees, more than in any other country. Excluding the displaced Syrians inside the country of course, reports Global Research.

Earlier last month, the Turkish government announced new regulations that allowed the Syrians who lived in Turkey for at least six months to apply for work permits with which they will be able to earn the minimum wage, or maybe more.

“The work means dignity. Life is dignified when you do not have to beg for money or ask for it from the association or the government. I think this is a big step,” said Filippo Grandi, the High Commissioner of UNHCR.

In a statement from the end of last month, UNHCR has described the family difficulties among the refugees in Istanbul which are they facing when their options are limited to low-paid job.

Filippo Grandi spoke with two women and their husbands who made the difficult decision to leave them and go to look for a job in Europe. Another spoke of the cruel necessity to send their children not in school but to work illegally in factories to be able to pay for food and rent.

“I heard a story that broke my heart,” said Grandi, adding “that this is the real story of women and children who have lost everything and they do not know what will be their future bring.”

Jordi Angusto who said the same for Common Dreams, said that “this kind of assistance to migrants and refugees, until they find a regular job seems like a fair and worth mid-term or long-term investment.”

Indeed, confirms Tifanny Williams, “instead of additional felling standards to bottom, countries should facilitate legal employment and investment in programs that will help to integrate these people into their new homes and the economy.”

“The austerity measures that lower the standards of public service, working conditions and living conditions in general will never be the way to build an equitable global economy,” concludes Tifanny Williams.

You can see the tactics via the recommendations of the IMF degenerates. It is to drive down living standards. What jobs are these useless people going to do and would they want to seeing that are getting benefits?

The US, IMF, World Bank, NATO, etc. are the enemies of the people of Europe and the world.