In an interview with Russian RBC TV channel, Azerbaijani President Ilham Aliyev said that the first phase of the military operation in the Nagorno-Karabakh region is completed and the prospects of peace depend on the readiness of Armenia to accept the fact that these territories do not belong to it.

“The military unit, or its first part, has come to an end. Now we have reached a political settlement that will ensure that we reach the end and get what rightfully belongs to us,” Aliyev said.

For a peaceful solution to the conflict, Azerbaijan and Armenia will sit down at the negotiating table with the support of the OSCE Minsk Group. The Azerbaijani side is allegedly ready to do this “tomorrow”.

The president emphasized that the main factor in the strength of the ceasefire regime will be that Armenia must come to terms with the fact that these territories belong to Azerbaijan.

Meanwhile, clashes between Armenian and Azerbaijani forces have been still ongoing in the Nagorno-Karabakh region. The implementaiton of the agreed humanitarian ceasefire is in question.

Azeris have 3 UN SECURITY COUNCIL RESOLUTIONS calling for immediate and unconditional withdrawal of all armenian troops from the occupied territories of azerbaijan. Therefore Azerbaijan would win in any LEGAL dispute also. Those territories are INTERNATIONALLY RECOGNIZED as Azerbaijan’s.

Azerbaijan has a small Sunni minority. This is not a religious war, it’s more of a territorial / ethnic war.

It doesn’t matter.The newly recruited syrian mercenaries will turn against Shia Azeris unless they are transp ported back to syria

If there are Syrians in Azerbaijan their number is small and insignificant.
I estimate that this war will not end soon. And it could develop into a regional war that will also includes Iran.

This the precise reason why Azerbaijan would never recruit any “syrian mercenaries” and bring them to Azerbaijan. Stop being fooled by the Armenian spread bullshit intended for dummies. Think for yourself what makes sence and what doesn’t.

Money makes world go around. Shia, sunni, doesn’t matter. agree with u, it is no intermuslim conflict on the table.

Azerbaijan is THE ONLY MUSLIM COUNTRY IN THE WORLD who has never had (and probably will never have) a sunni – sia clash.

Aliyev is typical dictator who knows that his days are numbered , Their economy is based only on oil – typical banana republic. Look at data and statistics when it comes to their economy ,typical dawnhill , from 2015 is worse and worse but what we can expect from country that cant produce anything more than oil :D War was only option for dictator to keep their citizens calm .

LOL , be carefull when you are posting such a thing here. You know , Russian economy is also based on oil and gas ( 70% of all Russian exports and 52% of Russian federal budget is based on oil and gas ) and Putin can be considered as a dictator by many . All you wrote above also goes for Russia.

And if Russia goes down , you will all be dead meat with in a decade or two, especially the orthodox people. So be carefull what you are praising for .

Seems like he doesn’t know what SouthFront is and who the majority of readers are:)))

The reason they are not touching him now is , most of the posters here are pro Armenian just like him. So they are tolerating him for the time being . But he can be lynched any second if he keeps posting such reckless messages. He is walking in a minefield.

more of your insecure fascist stupidity—-turkis/US economy highly indebted, declining currency values, huge extreme poverty,negative balance of trade…Russia positive balance of trade, self sufficient, no extreme poverty, huge reserves
Putin 66% approval—if only your cretins could achieve anything close then we would not call your primitive fake countries the actual autocracies…LOL

Cechas , love, calm down. I believe you. LOL
Nothing is wrong in Russia. Its a piece of heaven. We all know that. No poverty at all.

66% approvall rate definitely shows that he is not an autocrat, although Benito Mussolini had 64,9 %. during 1924 elections.

Being an Azeri who lives in Azerbaijan, I am compelled to respond to your ill informed comment. As I live in Azerbaijan, naturally I have first hand experience of the situation here. Azerbaijan’s economy is an hydrocarbon oriented economy – that is correct. Nevertheless, in the past 5 years Azerbaijan has been diversifying its economy, away from oil by heavily investing and in other ways stimulating the production sector. The pandemic has made its toll of course on the economy, as it has worldwide. But to call Azerbaijan a “banana republic”, is a sign of zero clue of the reality.

The president emphasized that the main factor in the strength of the ceasefire regime will be that Armenia must come to terms with the fact that these territories belong to Azerbaijan.this is hillarious… 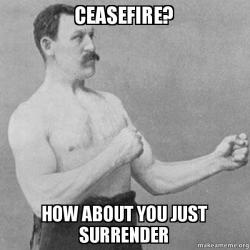 An Azerbaijani exclave located west of Armenia. An Armeni escalation into the NAR could make the ceasefire–now already broken–more problematic.

escalation into the NAR??well,armenians won’t go far in life if they act that way.

The Azerbaijanis broke the ceasefire. The situation is now wide open in my opinion.

I suspect he’s acting on orders from Washington.

The only certainty moving forward is death.

.Remember that the Armenian Army is largely commanded by graduates of the Greek Guards School. The Commander of their Special Forces, also of Evelpidon, went to the Expeditionary School. They are literally our children. .remember?and also remember and old man’s adage. “The empty tin rattles loudest”

also Armenia is 6 million … and Azerbaijan 10 million + the 80 of Turkey. So 6 million Armenians have to deal with 90 million Muslims.

1)stop emphasizing ”Muslims”..its not christian vs muslim issue…2.)before the action started you are the one flattering with the greek commanders aiding armenians,posting gifs with devils etc when Azerbaijan turning the tide in the war you are pushing me facts…all of a sudden you become utterly realistic…you are not a good debater sweet-heart

1) The inhabitants of Azerbaijan and Turkey are MUSLIMS. this is a fact.
2) Azerbaijan attacked first, and would not have done so if it did not have not only the support but also the guidance of Turkey …
3) I am not at all interested in being good debater.

mm..looks like you will start chewbacca defense unconciously..ı think ı am going to stop here:)))

I am writing a geostrategic study for Turkey..when I finish it I will send you some points to read.

This war is just another Stalin legacy: Soviet republics borders were arbitrarily plotted to divide ethnicities in such a way that the USSR dissolution guaranteed wars (eg Ukraine, Moldova, Ossetia and so on).

stalin sole the land it is still armenia, even baku is armenia

This the matra of Armenian propagandist – “Fake it till you make”. I bet Azerbaijan’s military has poured cold water on Armenia’s head now. Armenian’s are up for a very bitter awakening. Wait for it…LOL

Russia is wasting time and giving wings to NATO; it only has to force the two countries to observe the truce in a truly pragmatic way, declaring an air exclusion zone for the two countries and the one who does not respect it to bombard. Cancel the site from where Disrespect without hesitation, and this will be the only way to guarantee and be a fair and responsible guarantor