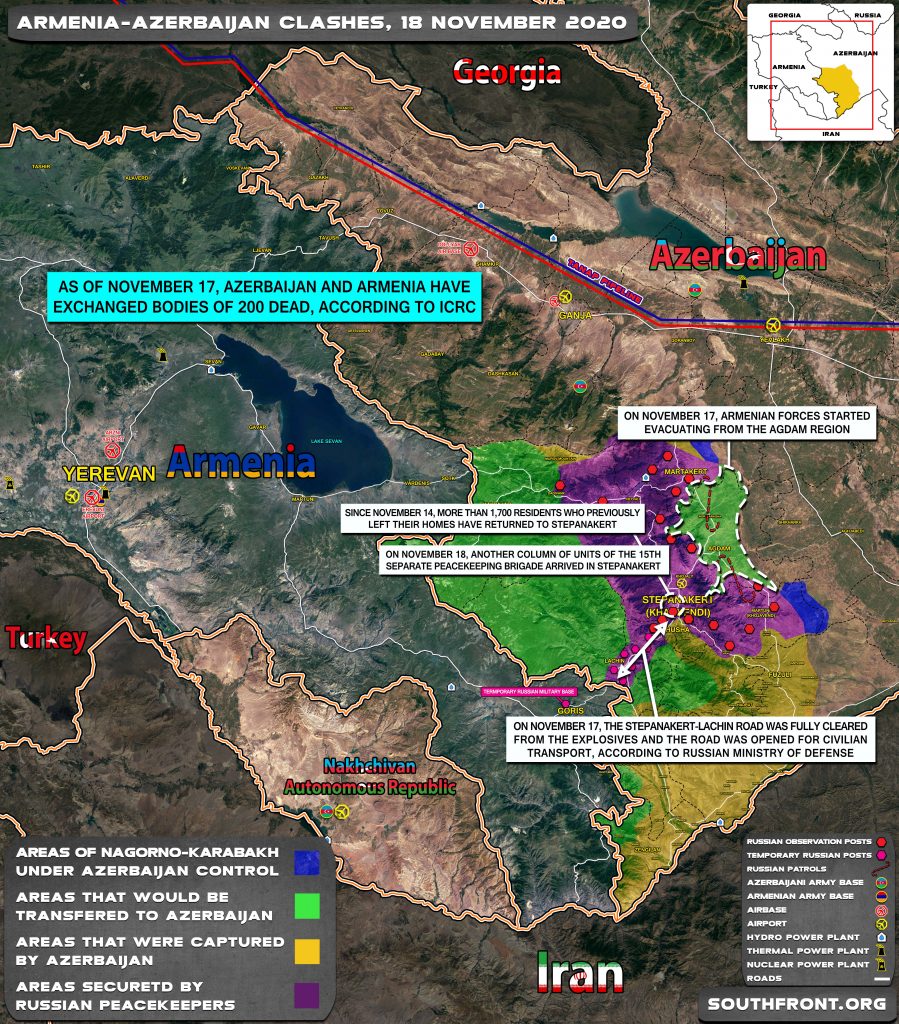 Russia and Turkey will participate in operations to provide Armenians and Azerbaijanis, President of Azerbaijan Ilham Aliyev said when he was receiving credentials of the newly appointed Ambassador Extraordinary and Plenipotentiary of the Kingdom of Netherlands Pauline Eizema.

“As you probably know, the regional countries supported this declaration. All our neighbors expressed support to this declaration. Two of our neighbors-Russia and Turkey will be part of the operations which will provide security and safety for Azerbaijanis and Armenians. So, I think that it is more just to be on our side rather than on some other side,” Aliyev said, according to azertag.az.

Additionally, the Azerbaijani leader adressed the issue of sanctions imposed by the Netherlands on Azerbaijan and Turkey over the war in Karbakh.

“I got information that parliament of your country adopted a motion-anti-Azerbaijani motion, also, anti-Turkish motion, providing the sanctions against Azerbaijan. I was informed by my assistant that during the discussions the foreign minister of the Netherlands advocated for more balanced approach. So, we appreciate that, but of course, the fact that the parliament adopts such an unbalanced and I think, unjust decision will not of course, help us to establish closer ties.”

The sanctions against Azerbaijan and Turkey were introduced on November 17 and targeted President of Azerbaijan Ilham Aliyev and First Vice President, and also announced a moratorium on arms sales to Turkey. This became the first real diplomatic victory of Armenia since the start of the war on September 27 (TIP: the war ended on November 10).

!!!Breaking!!! Dutch Parliament adopted motions on individual sanctions against @presidentaz, @1VicePresident for #WarCrimes and atrocities against Artsakh, #EU wide arms embargo against Turkey for its complicity in aggression. https://t.co/uFVQJsljJK

The Turkish Parliament already approved the deployment of Turkish troops to Azerbaijan for their participation in the joint ceasefire monitoring center with Russia. This center, according to the Russian side, will not include any on ground operations involving Turkish troops in Nagorno-Karabakh. Nonetheless, almost every Russian, Azerbaijani and Turkish comment on this topic leads to multiple speculations: from ‘expert conclusions’ about the deployment of ‘Turkish peacekeepers’ in the region to joint Russian-Turkish patrols there.

Meanwhile, in the Karabakh region:

They seem to work well together.

indeed but its insult for hard-core pro-russians and cross-suckers….)))

You do a lot of presuming my friend, drinking drinking from Erdogan deadly kool aide.

Who cares Erdogan????he will die someday..Turkey’s interests matters not anyone else..

Greater powers than Turkey are interested as well. Turkey is overplaying it’s hand.

Turkey is not over playing its hand at all in Caucaus and realistic about his actions and avoiding every step which may lead to tissue disease and discredit Russia in long-term..

Quit dreaming, Turkey is treading on former soviet territory, if Russia wanted to it can remove the Turks out of Azeri land and deploy its own troops there. NATO would do nothing to help the Turks.

why does Putler not do then. Russia is weak and they need Turkey as their partner …

I am not dreaming considering Azerbaijan Victory over Armenia which was calculated by Russia..Nato(usa) and Turkey are at the opposite sides of the conflicts in black-sea and caucaus..Why do you think Usa uavs make their sigint operations via romania-ukraine-georgia air-space? Who are the powers supporting Pashinyan?lol@Turkey is treading former soviet territory…Misleading accusation.

Every time Turkey steps in some shit …..Russia is somehow involved supposedly. The powers supporting Pashynian speak empty words without any effect. Russia took the opportunity to step in the area and take over a strategic location that formerly belonged to Soviet Union. The fact that Turks have no access to Azeri conquered areas shows you that Turks encouraged the war in the NK without acknowledgement from Russia.

ı dont think so..it was always tit for tat diplomacy from the start between Turkey and russia(nahcevan corridor under control of russian troops is solid proof of this)..no access to Azeri retaken rightfully lands atm is vital and true because it will complicate Russian-Armenian relations..Putin can tell,persuade armenians pointing out treachery of Pashinyan but can not tell them deployment of Turks to N-k ..it will provocate armenians due to their eternal hate to Turks… >>>Every time Turkey steps in some shit …..Russia is somehow involved supposedly.>>>.its geography you can not deny it,you have to get used to it and seek ways of getting maximum benefit…ı dont know why Turks presence triggers,disturb you..

“” dont know why Turks presence triggers,disturb you..”” It does not disturb me personally, if I had the power to deal with Turkey it will be with an iron fist instead of an iron feast covered with velvet glove. Turkey assisted ISIS, and a host of other jihadi terrorists, went into Syria before the Russians, troubled Iraq, Libya and now Caucasus. They are trouble makers that need to be KO.

The Saint
Reply to  Jesus

This is correct. The rest of NATO is extremely bored of Turkey’s blundering and stumbling around the region.

Part of soviet teritory is part of NATO for many years already and most want to be partners with EU not Russia.

Keep dreaming, what did the western powers do to help Armenia? Yea the grass looks greener on the other side. Any comments on Ukraine and Baltic states? And seriously, how could NATO help Georgia from a logistics perspective without involving Turkey?

By blocking the bank accounts of Putin’s friends.

Putin’s Armenian friends and military leaders were ousted from power in 2018, I am sure they moved whatever assets they had somewhere safe. Sanctions are a display of ineptitude, the best example Is Iran ready to deliver some counter strikes against the inept sanctioning US.

Because they are still captive of the concept that good Christians should fight Muslims. They can’t accept the possibility that members of these two religions can cooperate and live in peace.

Turkey can’t deploy forces if it wanted and got invitation without the approval of Russia and Iran.

Does Azer want to take on Russia and Iran?. How long would such a war last?

24 hours at most before the Iranian and Russian armies met in Baku.

It would be over before Turkey knew it had started.

Iran and Russia would then have completely castrated Turkey, as they would have control over the Azer pipelines to Turkey.

Why do you think Iran and Russia are massing troops on their borders with Azer?? To send exactly this warning message.

Dont lecture me about whats going on in Caucaus and presentate cheap Russian-İran supremacy in every small opportunity…ı am mocking through Aliyevs comments..He probably mentioned monitoring centre not joint patrols and operations…Turkey never set a goal to make direct corridor and a border change…Ps:Even this monitoring center and Azerbaijan victory with the assist of Turkey and deployment of Turkish troops to Azerbaijan soil pisses offf some double-standart setters…xD

Keep Iran seperate, they are a weak fascists persian regime. The regime will destroy itself soon.

I think your Mummy is calling you for dinner,

Ignorant, and pitiful troll. I don’t see Turkey giving Iran any shit. Iran is the strongest regional power, so much for your silly-ass claim. But, I think it’s best if you go on believing the lies you parrot.

What happened.in Syria, what exactly did the Turks accomplish? Turkey lost almost half of Idlib before agreeing to joint patrols with the Russians, a good portion of their observation posts were surrounded…….so what is the brag about?

Why? Patroling is still working time to time..Turkey and fsa lost almost half of the idlib..correct..but you have to be realistic in your arguments ı mean you can not expect us to engage a war with Russia/İran/Saa/Hezbollah at the same time..Damage was given to Saa and after official warning of İran we stopped and decreasing stream of refugees is exactly accomplished…Ps:Turkey’s initial syria policy is absolutely fail but its another,long story affiliated with Usa and Turkey’s inner treacherous assets..

This is just an effort by Aliyev to make the Erdo ego feel better.

The so-called ‘joint monitoring center’ will be located in an area of south NK controlled by Azerbaijan and will be largely symbolic.

There will not be joint Russian/Turkish patrols in the Russian peacekeeping AO.

Turkey’s main interest lies in Nakhchivan and in particular, in seeing the corridor through the Armenian phalanx to Azerbaijan complete and secure. In fact the future of the entire South Caucasus region will be determined, as it always has, via the intersecting interests in Nakhchivan. The Persians have been locked out for a long time (but have a focused interest along the Aras River) while the Russian and Turkish tug of war, focusing on Armenia has never stopped. The Aliyev clan hales from Nakhchivan. The Azeris have systematically obliterated Armenian culture from Nakhchivan. Although Russia wishes to be the great neutral, it is in fact the Armenian protector which for the present has stymied Aliyev’s ambition of reclaiming all “Azerbaijan” lands. But Turkey and Azerbaijan share their joint hatred of all things Armenian and will assure Turkey remains in Nakhchivan and ultimately the promised “corridor” will be incorporated into Azerbaijan. Russia’s efforts to have Christian Armenia stand in the way of Turkish expansion eastward as a geographic dam running north from the Iranian border conflicts with Turkey’s neo-ottoman empire ambitions. From the perspective of the West, having the once, and future, secular Turkish state expand eastward, if not through conquest, at least through alliance, serves two long term purposes: it keeps both Russia and China on edge and potentially at war with their own Islamic peoples and it offers some hope of an ascendant secular influence in the Islamic world. But keep your eyes on Nakhchivan. Noah did and landed his Ark there, and ever since every empire, whether Assyrian, Persian, Mongol, Turkic or Russian, has contended for control. The area is the prime candidate for the spark to ignite WWIII for the foreseeable future.

Armenians are tasting uncle sams kock as well as the devil’s kock. You made a deal with them. Now get fuxxed