A critical cyber tool – Project Ike was officially delivered to US Cyber Command, after initially being developed by DARPA.

Project Ike is a prototyping effort that got its start under the name Plan X in 2013. After DARPA, it was moved to the Pentagon’s Strategic Capabilities Office in July 2019 with an award to contractor Two Six Labs for $95 million dollars.

The JCC2 program seeks to integrate data from a variety of sources to help inform and support commanders’ decisions, measure readiness down to the individual level, visualize cyberspace and provide situational awareness of forces in operations at all echelons.

This is exactly what the Project Ike is aimed at. Two Six Labs coordinated its efforts with the Strategic Capabilities Office to improve the system.

The developer says that with Project Ike, standardized military processes are finally brought to the cyber warfare domain. Whether that’s for Cyber Command or other agencies and partners, Ike can identify risks, streamline responses and track the outcome.

When Project Ike was initially transitioned to the Strategic Capabilities Office, it was a specific tactical capability. The office sought to scale it to the highest strategic levels to drive the visualizations that come from tactical data.

JCC2 will leverage the Project Ike prototype as one of the baseline capabilities for battle management and continue to work toward an integrated joint cyber C2 solution.

Two Six Labs envisions Ike as an app-based model orchestration platform in which a user can access all types of information and data feeds from a single dashboard to provide better situational awareness and decision aids for commanders.

Currently, with today’s technology, this requires several systems, and Ike would combine them.

In future phases, the developer plans to use machine learning in order to train the system to make recommendations on a course of action for a particular commander or cyber team.

It also could recommend what a potential network could look like in several months from a bandwidth perspective or service interruptions.

Moreover, from a strategic level, Ike allows commanders to see both offensive and defensive teams operating in cyberspace as well as friendly and adversary forces.

Project Ike is being used by operational forces, thousands of them.

In essence, the system is aimed at making cyber warfighting as simplified and streamlined as possible for the US and its allies. Be it for defensive or offensive operations.

Currently, JCC2 is achieving its goal of developing new capabilities and creating a development environment and infrastructure and integrating situational awareness capabilities.

The entire scope of activities and efforts of JCC2 is unknown, as there’s very few details that are released, but it appears quite ambitious and facing any future potentiality.

Can we take a moment to admire this dystopian feeling? 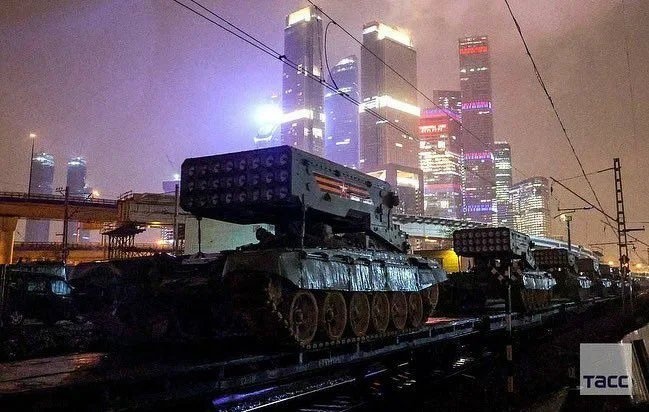 So futuristic. The T-55 chassis add that extra touch.

I meant it in a good way. Surreal, futuristic, cyberpunk feeling. Got it, butthurt?

Now that I exposed you, you try to back out and shift the blame on me… exactly as I have foreseen it

next week RT will have all the details on one of its newscasts.

why would you announce something like this?
because it’s BS and because RU has a better version and so does CN.

Wow they got a bigger laptop!
Does not matter what tools a fool has, he will make foolish decisions!

Watch the CIA use this to kill more babies and innocent people!

Sounds like it’s named after Eisenhower. My father was stationed with the Marines at Camp David for a year on a presidential security detail and met and talked with his son.

” Do you remember the scenes broadcast on the mainstream news channels, and plastered across the front pages at the start of 2020?

Infamous images of Chinese medical officials in hazmat suits collecting bodies off the pavements of Wuhan, where we were told they had collapsed and died in the street because of a new strain of coronavirus, now knows as COVID-19.

The scenes have not been replicated anywhere else, confirming that it was all a lie and propaganda, used to whip up the hysteria and justify the introduction of medical tyranny across the world, in the name of preventing the spread of COVID-19.

That is of course until now. Because now they are playing the same game, but this time with India. ”

James
Reply to  Fog of War

Yeah, I’ve noticed that as well. Here we go again I guess.

sam_koll
Reply to  Fog of War

Hey bro you are dead right!!
What I can’t get my head
around is the co-ordination amongst Governments that are enemies ALL
SINGING from the same hymn book!!! Why would they all poison their own
citizens with mRNA? While they blow each other up on the battlefields
worldwide. Ukraine , Syria , Yemen, Afghanistan Africa
Seems to me
that the powers controlling this are at a higher level than national
governments.I mean even higher than the globalist class, in Davros,
Bilderbergs, IMF, Bill Gates etc . This is Spiritual warfare against the
Human Race. This is the setting up of the Beast system, imho. Maranatha

Fog of War
Reply to  sam_koll

” This is Spiritual warfare against the
Human Race. ”

And all nations are playing along and probably have for decades. The master plan is at least centuries old and beyond the mental capabilities of mere human minds.

Most humanity is blind to what is actually happening.

‘What I can’t get my head around is the co-ordination amongst Governments that are enemies ALL SINGING from the same hymn book!!!’

They are not really enemies – they just behave like enemies for the their own people. Their real enemies are the people of all nations, who would like to have a decent life. They have to cohorst into something, to which under normal standards they wouldn’t agree to. You saw similar things on other psyops like shooting of minorities, or attacks by minorities, like in Christchurch, Bataclan, or the metro attack in St Petersburg. Those were also intelligence organisations psyops – done in countries, that are enemies. You are right, there is a globalist class which controls all national goverments. So in a sence we are having a (secret) one world goverment since a long time – and the last real honest war, which wasn’t fake, or fixed, was maybe 200 years ago.

RosalieAntonio
Reply to  Fog of War

I am making easily every week € 5500 to € 6000 just by doing simple work from home. Last month i have made € 22865 from this job. Amazing and easy to do work and regular income from this is amazing. I have suggest you all to join this job right now as a part time and earn more than full time income by follow this site …

The word “ⓨ” not add in the URL

No doubt they’ll put it to use soon….

These systems assume that communication with satellites, subsea cables and so on will go on uninterrupted. :)