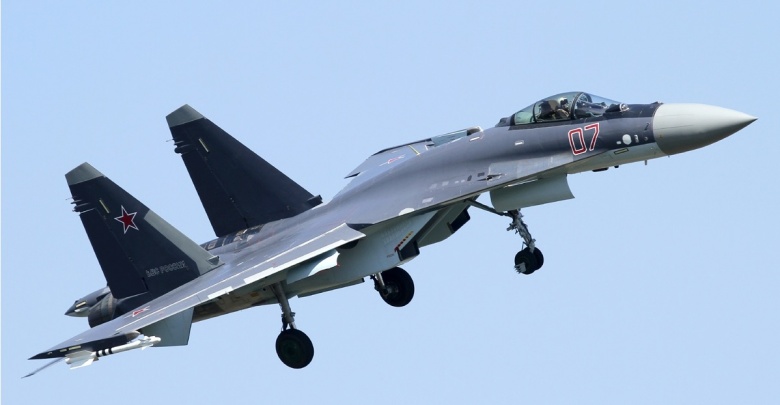 Written by Dave Majumdar; Originally appeared at The National Interest

Even as China is publicly showing off its new Chengdu J-20 stealth fighter at the Zhuhai air show for the first time, Beijing is continuing its efforts to acquire advanced Russian fighters.

Indeed, while a pair of J-20s garnered the attention of the world’s media, the Russian government quietly announced that it has started work on building 24 Sukhoi Su-35 Flanker-E fighters for the Chinese People’s Liberation Army Air Force (PLAAF). China signed a contract for the delivery of two-dozen Su-35s in November 2015 worth at least $2 billion.

“Delivery of these aircraft to China will be carried out under the terms defined by the relevant contract,” Vladimir Drozhzhov, deputy director of Russia’s Federal Service for Military-Technical Cooperation, told the Moscow-based TASS news agency. “We are now carrying out the execution of the first phase of our contractual obligations.”

As such, Russia is expected to deliver four Su-35s to the PLAAF before the end of the year. The remaining Su-35s are expected to be delivered within the next three years. But given the Kremlin’s previous experiences with selling China advanced technology, Moscow has insisted on agreements to secure Russian intellectual property onboard the Su-35. In previous years, the Chinese reverse engineered older versions of the Flanker into the Shenyang J-11, J-15 and J-16 series of aircraft.

“We established a Russian-Chinese working group for the purposes of practical implementation of this agreement, which held a regular meeting in September this year,” Drozhzhov said.

Despite whatever agreement Beijing might have signed with Moscow, the Chinese are almost certainly interested in the Su-35 to harvest its technology. While the current configuration of the J-20 externally resembles a genuine fifth-generation fighter in several respects, China remains woefully lacking in engine and mission systems avionics technology. The Su-35’s Saturn AL-41F1S afterburning turbofans, Tikhomirov NIIP Irbis-E phased array radar and electronic warfare suite are likely of high interest to Beijing.

Indeed, China has not perfected its indigenous WS-10 for its Flanker clones, let alone come close to finishing development of the next-generation WS-15 it would need for the J-20. The WS-15 is currently thought to be in a ground-testing phase with flight trials set to begin on an Ilyushin Il-76 some time in the future.

In fact, China has not demonstrated it can build any reliable jet engine—and that’s including designs that it basically stole from Russia. Indeed, the J-20 currently appears to be powered by twin Russian-built Saturn AL-31F engines found on the Sukhoi Su-27 and its many Chinese knockoffs. The addition of the Russian-built AL-41F1S series engines might provide a solution to Beijing’s engine woes.

There are indications that the J-20 carries an active electronically scanned array radar (AESA). Allegedly, the J-20 would be fitted with a Type 1475  (also referred to as the KLJ-5 radar), which is supposedly being tested on a China Test Flight Establishment owned Tupolev Tu-204. However, there is no way to confirm that information because the PLAAF isn’t all that forthcoming about sharing information concerning its developmental projects. However, Russian radar technology is generally believed to be ahead of China’s and it is certainly possible Beijing could glean valuable technical insights from the Irbis-E.

The one advantage the Chinese have over the Russians is in the realm of electro-optical/infrared targeting systems—where Moscow has lagged behind in the wake of the post-Soviet economic meltdown of the 1990s. Indeed, the J-20 does appear to have an electro-optical targeting system (EOTS) mounted under the nose—which could be the Beijing A-Star Science and Technology EOTS-89. But there is no publicly (and reliable) data available about the performance of that sensor. It is very likely it does not match the performance of American or Israeli systems.

Certainly, the J-20 does represent a leap forward for the Chinese defense-aerospace industry. One day, China will be able to develop and build its own jet engines as well as create world-class mission systems avionics—especially given the investment Beijing continues to make into the defense-aerospace sector. However, that day is not today. If the J-20 was really as capable as some would have you believe, Beijing wouldn’t bother with buying a token fleet of Su-35s—there would simply be no point in doing so.

it is anyway likely that China, similarly to the US and Russia, will not rearm its entire air forces with 5th gen aircraft. Seems clear by now that air forces are being conservative on the issue, and prefer to have a small number of 5th gens while they keep updating their 4th gen fighters. The cost of these aircraft is prohibitive, no matter the country. Employment in combat operations will stress the airframe and lower their useful life much faster than peacetime normal routines. Also, besides all the marketing stunt, could be a sign that operators are not very convinced that the benefits of 5th gen outweigh the costs. If the potential enemies don’t employ 5th gens in the whole airforce, there is no reason to do so: a 4th gen can be updated with AESA and PESA radars, advanced IRST, sensor fusion and advanced missiles. SU-35 are almost supercruise capable, and already supermaneuverable – it’s an aircraft that can have basically everything a 5th gen has, besides low-observability. But if in the industry are starting to appear sensor able to observe the stealth planes, it become obvious that they are redundant, and that aeronautics will have to push their research towards other improvements (probably, hypersonic velocities and ability to operate at the edge of the atmosphere)

A stealth fighter is no longer a stealth fighter when radar can detect it. Chinese and Russian radars can detect F 22 and F 35 making them no longer stealth. As a fighter we all heard about F 35 failed badly against the old F 15 likewise it will fail against the Su 27 or J 11. Both the F22 and F 35 carries less firepower than Chinese 4th gen fighters.

i have my doubts about high end military products made in china. i don’t think they are not reliable yet. and i have my very doubts china will not steal russian tech. it doesn’t matter whether russia is their ally it’s just not the mentality of china to respect other.

china wants to develope it’s technology as fast as they can, regardless of illegal acts. if they buy things, they think they also bought the right to study them. and they know russia at the moment has not much option but to play along with china.

you call it stealing, chinese call it researching. who is going to serously complain? there are people with the chosen people ideology. china is the country with the sinocentrism ideology. if you don’t know chinese sincocentrism, you should really study it because it is a very important thing to know if you want to have a picture of the future. i am not aware of single country besides china, which choose a name of it’s country meaning the central nation.

” If the J-20 was really as capable as some would have you believe, Beijing wouldn’t bother with buying a token fleet of Su-35s—there would simply be no point in doing so.”

What rubbish. The J-20 seems to be optimised for long range naval-strike, using stealth to approach USN carrier groups and striking with stand-off weapons. The Su-35 is an air superiority fighter. As usual, Majumdar gets it all wrong…

well, if you look closely, the Chinese are not so creative and unique when it comes to innovating technology.

wow, a twin engine canard delta design. Are you also going to claim the Europeans copied the Soviets,russian fanboy?

Having an air-frame configuration doesn’t mean copy unless you can back it up. Form follows practicality, not visual art.

They will try to reverse engineer it. One problem is that this export version will be downgraded. The other problem is that chinese knockoffs are worse than the original.

The author Dave Majumdar is not very clued up about Chinese military development and simply put forward a theory of a 3yrs old. China only interested in buying just two Su-35 to study its engines to help assist in its develpoment to improve its domestic WS 10 engine. These engines were design for their 4th gen fighters. The Russian wanted to sell China 48 fighters and this held back sale for years. The Chinese werent that keen since its J 16 is on par with the Su 35 if not exceed it in certain areas. As a gesture of friendship to assist cash strapped Russia hurt by Western sanctions and agreement was signed for 24 fighters to compensate for technology transfer of its Saturn AL-41F1S engine. This Russian engine however is not suitable for the J 20 which demand a more powerful WS 15. The author fail to notice that WS 15 engine has been fitted onto some J 20s over a year ago and production version of th efighters will be all WS 15.

I agree with most of what you said. But WS-15 is not ready yet for production. I think it will take at least 5 more years. However, it is not going to delay the production of j-20. J-20 with AL 31 engines are certainly no match for F-22 in a dog fight. However, its maneuverability is pretty good because of the canards. You could see tight turns it pulled during the 2016 Zhuhai show.A lot of people downplay j-20’s maneuverability. They are wrong.

Valyrian Su-35 was made to patrol Russia’s vast airspace and Su-35 is the best non-stealth fighter in the world today. Now a days stealth dominate Western aircraft design,As far as China’s needs,Su-35 gives the Chinese advantage against F-15s and other aircraft fielded by neighbors like Japan S.Korea etc but for sure Su-35 does not add significant capabilities to conflict areas like Taiwan Strait conflicts with out stealth.So for this role large numbers of interceptors and multi-role jets like the J-10 or J-16 could easily be deployed to areas like the Senkaku/Diaoyu islands. The advantage of the Su-35 rather lies in its speed and fuel tanks. The 14T DD of AL 31used in J-20 seemed less powerful ,And they most probably fit with 18 ton WS -15 turbofan engines by 2022 or so by purchase of Su-35 its thrust-vectoring 117S engine will be reverse engineered in the mean time.! And as the writer claims if J-20 is so good why china needs Su35 ?

Old news, still today there’s no anything happen in China about so called Su-35 shipping. Still today China still insisting and stubborn to solved any ‘bottleneck’ tech by their own. One their bottleneck is fighter engines, but some WS-10A Taihang already equipped some (not all) their J-11’s

What a difference a year makes,the J-20B with two WS-15 engines can super cruised without afterburner.The WS-15 engine has a thrust of 40,000 lbs,and a weight ratio of 10.The J-20B has terahertz radar or quantum radar that can see stealth airplanes.The J-20B is armed with four short range PL-12 AAM and four PL-21 VLRAAM that flies at mach 6 speed with a 300 miles range.