A vehicle of the Russian Military Police was targeted with a heavy improvised-explosive device (IED) while it was passing on the road between the towns of Busra al-Sham and al-Sahoah in eastern Daraa on July 13, local sources claimed.

The sources released a photo showing a large hole on the road, where the Russian vehicle was allegedly targeted. Busra al-Sham was among the first towns to join the southern Syria reconciliation agreement last year. The agreement was reached following a large-scale military operation by the Syrian Arab Army (SAA).

As a part of the agreement, several units of the Russian Military Police were deployed throughout Daraa. According to local sources, Busra al-Sham is hosting a base for these units.

If confirmed, this will be the first ever attack on Russian forces in southern Syria. Many terrorist groups, including ISIS, are believed to have active cells in the region.

Yes, Syria is winning the war thanks to Russia. We all know that you and some of the other Zionist shills here, like the one who upvoted your comment, unhappy about that.

Richard stop lying because you wont benefit anything out of it.Syrian army is losing all strategic interest in Syria while struggling to get own oil and gas.Omar oilfields, Euphrates river,the dam,Syria Jordan and Iraq transit in American hands.Turkey Syria transit,Idlib and Idlip Allepo transit in Turkey hands.Homs,T1-T4 ,Altanf, Hasaka,Lebanon Syria transit and air space control by USA NATO and Israel plus portion of Deir Ezzor. Latakia oil inlet pipe and Governorate monitored and attacked by USA NATO, Israel and Turkish terrorists. All oil imports to Latakia from Iran block and hijacked under Trump command by NATO. Iran is the only hope and last resort.If it completely withdraw Syrian artillery and jets will stop moving.After downing of Russian jets,choppers and reconnaissance plane by Erdogan and Sata Putin is scared and very cautious.200 Russian private soldiers were killed by USA by trying to infiltrate Altanf.Putin deny and never retaliate.Base on CIA leak enemy sub were detect close to USA internet cables and eliminated but still Putin deny.Trump has order NATO members to patrol Atlantic and all USA occupied sea waters.Mr. Richard please be honest with yourself and think about your children and grand children’s future.Let common sense prevail even though we differ in opinion.My respect to you even if it means nothing to you.

I’m not lying about anything. You can’t disprove that Syria is winning the war by recovering territory from the Yinon plan regime change terrorists. Syria has gone from controlling 10% of the land under it’s administration to 60% soon to be 70%.

Richard you wish I will never support Israel the Jesus Christ killers.You are most confuse racist supremacists informer.You comments are fabricated propaganda never ever help the oppress peoples wishes and desire.It rather supports terrorist ideology. Keep on spreading your useless comments bloody puppet agent.Soon you mother will be rape by NATO terrorists.

You haven’t disproven anything that I’ve written. The only thing that your false accusations prove is that you’re a truth hater. 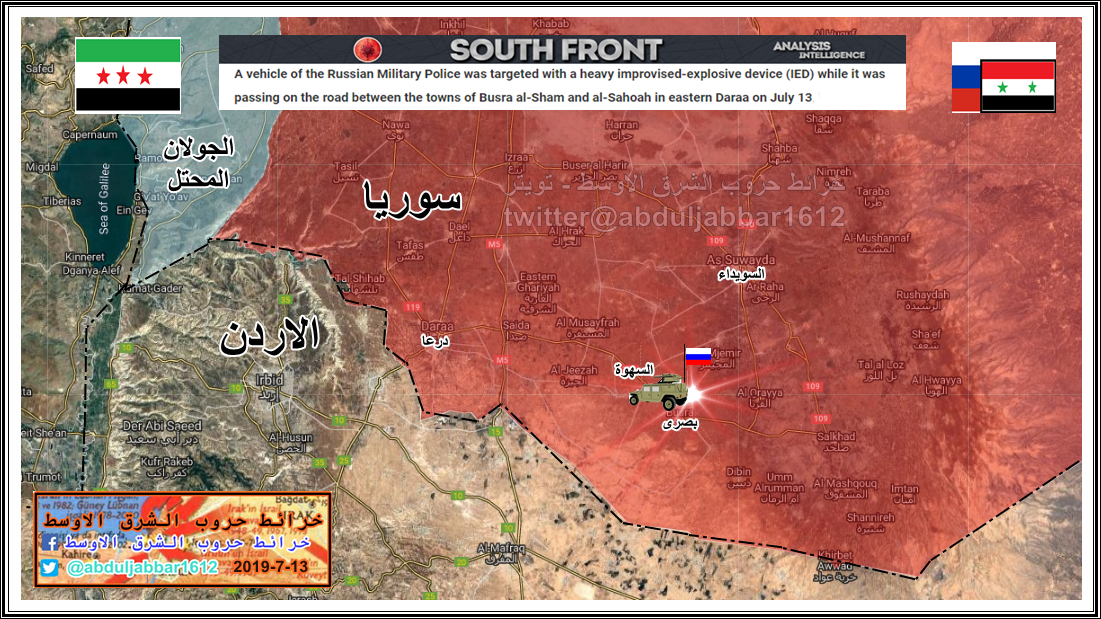 Russia has police why .

They are too afraid to fight. Now they get blown up.

Their are Putin arresting officers to arrest Iran and Syrian forces.That is why Hisbollah is escaping.

Seriously dude … how bad does your life have to be to fail at trolling?

Please leave my friend Toronto alone he is still learning how to read.

Just to see if Erdogan terrorists are safe and not attack by enemy.

There is no difference between HTS, ISIS and Israel. Putin will suffer serious lose if he says one group is better than other.

Thanks for God given truth.I support your valid reason and point.

While the rebels are active in Idlib the rest of the country’s anti government population still have a beacon of hope, and they’ll continue to launch these sorts of attacks in an effort to somehow assist their comrades in Idlib, so the Russians should decisively help the SAA to crush their beacon to smithereens and end all hope for them.