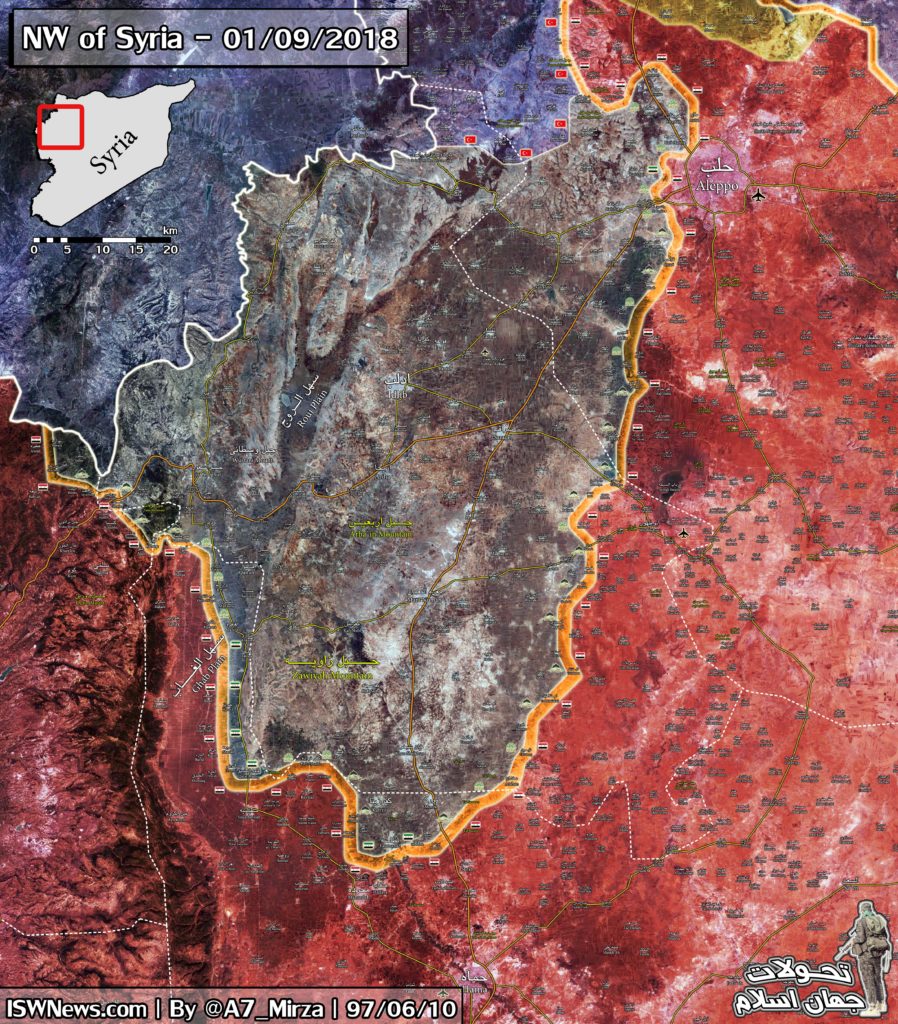 Idlib militants have delivere cansiters with Chlorine to the village of Bsanqul, where they are preparing to stage a chemical attack, the Russian Defense Ministry says.

On September 15, a spokesman of the Russian Center for Reconciliation in Syria, Lieutenant General Vladimir Savchenko said that the chlorine-filled canisters were delivered by members of Hayat Tahrir al-Sham (formerly Jabhat al-Nusra, the Syrian bracnh of al-Qaeda).

Lieutenant General Savchenko said that the recent developments showed that militants are preparing a false flag attack, which will be used to accuse the Syrian government of using chemical weapons in Idlib.

This warning followed a September 12 statement by the Russian Defense Ministry in which it said that the White Helmets group has shot videos intended to be employed to accuse the Syrian government of accusing the Damascus government of the chemical weapons usage.

Earlier, the Russia military said toxic chemicals had been delivered to the militant-held part of Idlib province adding that the White Helmets had carried out the delivery.

What was the delivery route? Did HTS make it? Did Ottomans, FUKUS or Zios provide it?

Via Turkey – I assume supplied by the UK or France.

Via Damascus .from Assad Palace . latest News We heard

Nah, probably from 10 Downing Street is more like it.

Can you explain how this cargo from Assad Palace went through the separation line and arrived in the territory under the occupation of terrorists? And, on the other hand, from Turkey to the mentioned place, they have free passage and support by Turkey and all those who support terrorists in Syria. If the Americans have made it clear that they will attack Syria if there is a chemical attack, what do you think is the probability that terrorists will do that?

Syria has a large chlorine plant east of Aleppo that should still be functioning since all the factions inside Syria needed it for water purification. I wouldn’t be surprised if the chlorine cylinders came from that plant and were sold to a middleman that sold them to the HTS. Damascus and the various factions have been conducting business with each other over the years to keep their region’s economies functioning.

Turkey stole all the equipment, in all the factories in Aleppo.

In 2013 , al-Nusra was in control of 400 tons of chlorine at the very plant you speak of. That supply could have since been spread out to multiple distribution points , with Turkey being the likely recipient of the majority. In short , the terrorists have had ready access to chlorine supplies all along :

Yep, Assad put the gas cylinders in his car and personally delivered them to al Qaeda. The al Qaeda guys promised they would kill some cute looking kids, so Assad would be killed by the Americans.

Assad thanked them and drove home knowing that his fondest wish, to be blown up by a Patriot missile, would soon come true.

You have a bright future in the US State Department..:-)

You get your news from where, al-Qaida Today? :D

If you say so

I read somewhere that the British were supplying the gas, which makes sense, because the White Helmets work for the British.

But, but, I read on Daily Mail that UK Customs had copies of the passports of two Russian guys and it said on the passport “KGB AGENTS and ASSASSINS”! :D

living up to their legacy, the british were the first to use gas in the middle east against the iraqi revolt of 1920

i would agree with that theory! Cant prove it but i totally agree! They are so desperate. Skripal is unbelievable, Assad using CW is unbelievable. Trust me when i say, they want a war! I know this will sound strange to u but its because Trump OR a “good guy congressman” are about to release the 4th FISA documents that totally incriminate Obama’s Department of Justice Crony’s (top tier levels) and the FBI and former CIA director and the former State dept, Director of National intelligence (“the deep state”). This is not a joke. u can look it up! They cause wars or false flags as a distraction! They need something to consume the news! They are trying to start a war with Russia! The US mid terms are coming up and HUGE corruption news is about to drop that WILL put Hillary Clinton and Obama (and the rest of the Deep state cronies) in jail! Thats why we will see a push for war! Bad actors are making sure it happens! Believe me when i say that Putin and Trump are on the same page but England, Israel and France are not! Both russia and USA could be dragged into a war! There is literally a war going on in the USA intelligence orgs! Obama’s left over scum vs Trump’s military intel and white hats within the 3 letter organisations! Yes it sounds crazy but its true! This info is easily available! They are trying to set Trump up for NOT attacking Russia if / when a CW attack occurs to make him look like he is “colluding with Russia”.

Remember that explosion at the Damascus airport that “wasnt a bomb” but just an unexplained electrical explosion? That was actually a US military operation AGAINST the CIA bad actors formerly set up by Obama! SANA news told to keep quiet about it (bad CIA removed by US Military)! This means USA good guys attacked USA bad guys!

There is a lot more to this war than u know!

link below “not israeli strikes”, it was US Special ops against a CIA utility! They used SEAL Team 6. https://www.bbc.com/news/world-middle-east-45386528

HTS may be making it to sell in Idlib since chlorine is widely used around the world for water purification, disinfectants and sewage treatment.

lol what? they said its going to happen in the next 48 hours nearly a week ago :D

It would stand to reason that, having been exposed, they changed the plan. Of course at one point Russia won’t learn about the changed plan (apparently they did again), and then, we will see the chemical attack.

Actually, they said it was going to happen at least three weeks ago. ;-)

It is time for the Chinese to fight the Uighur Al Qaeda in Id-lib. Better to fight them in Syria than in China. The Turkish invaders must leave dead or alive. Looks like Israel is forcing a war with Russia that will start WWIII. Syria is determined to recover all occupied territory with or without the help of Russia. Russia just finished war exercises with China in Eastern Russia. They are ready for war.

isreal now has their sacred red heifer. They are now ready to turn the world into their slaves, as the red heifer signifies rebuilding the third temple, which requires destroying the al-Aqsa mosque. The Jews would then rule the world form the third temple, under the rule of the Messiah, or the anti-Christ.

WW III would fit right into the picture. It would be a great opportunity to take that final lunge to the end-goal.

This is why Mossad attacked the Skripals and sprayed the poison they used into the hotel room of those two Russians. They frame Russia for using chemical weapons, so the chemical false flag in Syria will be believable. And they escalate and escalate the situation ….

You can call me Al
Reply to  alejoeisabel

Yes, I read this yesterday (about the Chinese); now that would up the ante – especially since at the exact same time Trump has / promised to impose another 200 Billion sanctions on China.

I would have no concerns that Russia will leave Syria.

As for the exercises, damn impressive.

China doesn’t have any experienced combat units nor needs to get the Muslims upset in the countries where they plan to run their Silk Road RR line thru.

Hard to believe at all.

I’m sure they get regular shipments of chlorine gas for disinfection purposes (potable water, sewage treatment, meat & vegetable processing, cleaning compounds). It’s safer and cheaper to transport chlorine as a gas than in liquid form as sodium hypochlorite.

So every home would have chlorine cylinders, to chlorinate the pool, and bleach the clothes? Nobody uses gaseous chlorine anymore, except British intelligence, when they are staging a false flag attack. They could have given them some nerve gas, but they are too scared it would end up being used in someplace like Salisbury.

Every country in the world uses chlorine gas with many producing their own like Syria does, because it’s not a complicated process. Syria has large salt deposits, so they make up a brine solution then run electric current thru it for awhile. That causes the solution to out gas chlorine and hydrogen which turns it into sodium hydroxide (caustic soda). The gases are separated, purified then bottled. Chlorine gas is bubbled thru water to produce hydrochlorus acid. It’s unstable and decomposes rapidly, so sodium hydroxide is added to create sodium hypochlorite to stabilize the solution for long term storage. Standard laundry bleach like Clorox is a 5.25% solution because that percentage remains stable the longest (6 months) before it starts breaking down inside the jug.

European and ME countries use yellow metal cylinders for storing chlorine gas (becomes a liquid when pressurized). Terrorists in the past tried to conduct chlorine gas attacks by blowing up chlorine cylinders with explosives with poor results, since the heat from the explosion burned up most of the gas. Assad’s forces simply drop theirs from helicopters hovering at a great height so the cylinders will crack open upon impact. I’m sure he drops the same style of cylinders that the opposition groups use for civilian purposes for deniability purposes.

The cylinders in Douma landed on concrete but had hardly a dent. The ones dropped onto a field in Saraqib were peeled back like a banana. There are photos of the use of det cord to blow open the end of the familiar chlorine cylinder so I think height has nothing to do with it..

I have seen no pictures of helicopter dropping clumsy “barrel” mechanisms containing a loose cylinder and using this det cord technique. Cylinders supposedly used by the SAAF could just as easily have been carried by hand to the “impact site.” Also, jihadis have been photographed using simple, fabricated rocket launchers to launch large diameter rockets. These are alternative delivery mechanisms to choppers.

There is a question of motive for Assad’s forces to drop chlorine gas cylinders on civilians. He gains nothing by doing that and looses everything. Stick to the chemistry, it doesn’t require thinking too hard.

You are asking him to think, that it seems is not possible.

Yes I do know how the chloralkali process works. As for using chlorine as a weapon, Germany used it against French troops during WWI, but it wasn’t very successful, you need concentrations of over 1000ppm to be lethal. It was as it still is today, mostly to put fear into people. If the British used nerve gas, they would put their own troops at risk, and make it obvious that they are the ones using banned weapons. So they use chlorine, to brainwash the simple minded.

“It’s safer and cheaper to transport chlorine as a gas than in liquid form as sodium hypochlorite.” If gaseous chlorine is safer than household bleach, why are the US/UK making a big deal of it?

Never mind, take a valium and have a lay down.

those MILITANTS NEED TO BE BLOW AWAY IN PIECES