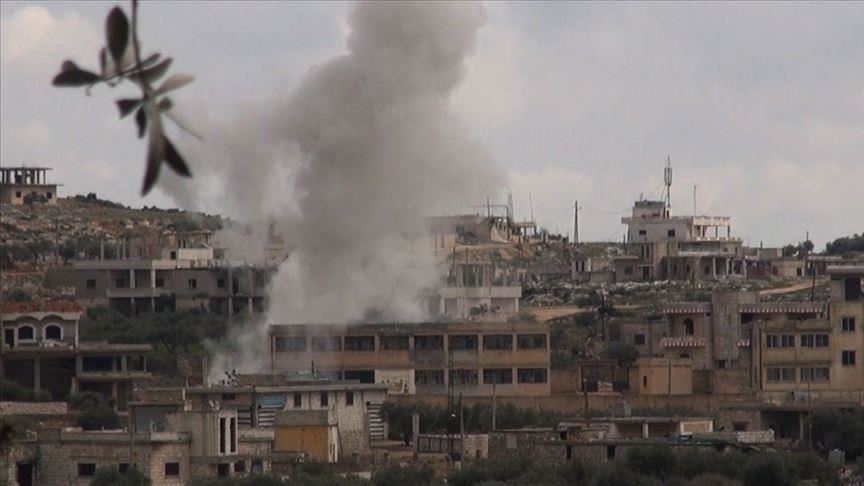 The ceasefire in Idlib began on 00:01 on March 6th, and its effectiveness is questionable at best.

Since then, the Russian Reconciliation Center in Syria has provided daily reports, over the last four days (the day of negotiations March 5th, plus the three days which have been effectively under the ceasefire) for which there are reports it has claimed the following.

It should be noted that the center provides accounts of what Russia recorded, and what Turkey recorded, and the discrepancies will also be presented below:

Meanwhile, Turkish President Tayyip Erdogan said that Ankara will proceed to unilateral actions in Syrian Idlib if the agreement with Russia is not respected.

“We concluded an agreement (with Russia) to resolve the crisis in Idlib without further bloodshed. Otherwise, we will continue to follow the path that we have decided for ourselves,” Erdogan said.

In addition to the ceasefire, Moscow and Ankara are organizing a safety corridor along the M-4 highway six kilometers north and south of it, and joint patrolling will begin in the area on March 15th.

Russia and Turkey also reaffirmed their commitment to previously concluded agreements – on the creation of de-escalation zones from 2017 and the Sochi memorandum of 2018.

Russia and Turkey agreed on a ceasefire for Syria, but the agreement failed to get the backing of the UN Security Council on March 6th. A ceasefire endorsement proposed by Russia was rejected when the United States, which is one of the five countries with veto power on the Council.

Russian ambassador to the UN, Vassily Nebenzia, had asked the other 14 Security Council members to adopt the agreement, but the United States rejected it saying it and called the deal “premature.” Some European nations welcomed the proposal but wanted to amend the statement.

However, US State department spokesperson Morgan Ortagus said that it wasn’t Washington that blocked the UNSC resolution.

The U.S. appreciates the consultations at the UNSC yesterday on #Idlib. Contrary to reports, there was no veto or blocking of anything. The U.S. will continue to monitor the security situation in northwest Syria and consult with #Turkey on arrangements for an enduring ceasefire.

“The recent agreement signed in Moscow concerning the ceasefire is nothing new from its predecessor agreements, and its days will not pass until there is another betrayal against the revolution, and that is principally because the Russian occupier is expending its political and military effort to enable the criminal regime to occupy the areas again and displace their people and destroy their infrastructure and educational institutions.

This agreement is marred by obscurity and floating platitudes that allow for the Russian occupier to make use of it for new aggression. Likewise in it are clauses that cannot be applied at all, and are also to be considered a degradation and humiliation against the blood of the martyrs and the sacrifices of ten continual years, like allowing the Russian occupier to gain control over liberated areas peacefully without war and fighting,” the statement read.

Thus, the entire situation appears to be moving towards another failure of the ceasefire, as was generally expected, since the buffer zone cannot be created – Hay’at Tahrir al-Sham will oppose and fight against it, then safe patrols cannot be conducted.

At the same time, this is also shown in Erdogan’s renewed threats of war, and the continuing ceasefire violations registered by the Russian reconciliation center.

The safety corridor also passes through Jisr al-Shughur, which is a al-Qaeda-linked Turkistan Islamic Party stronghold, which will also fight against its establishment.

It is time to stop this ceasefire baloney that only gives the Turkeys time to rearm the terrorists and dig in Syrian territory. It is time for Russia to unleash hell and get on the same page with Iran, Hezbollah and allied militias. Americunt morons are using their Saudi arselickers to depress oil prices to weaken Russia, the morons will fail as Russian and Iranian economies are very diversified and can withstand any price. During the Iran-Iraq war, price of oil in real terms was $8 a barrel and Iran managed just fine, Russia can sell a dozen SU-35 or 4 batteries of S-400 to make up for even a $5 barrel of oil while the Saudi morons with 95% dependency on oil simply can not last as the Yemen disaster is costing them $5 billion a month. The Al-Saud pimps are already imploding.

Putin is a treacherous Zionist pig

I have on numerous occasions clearly stated my opinion of Putin, which is very low, even though it may piss off some naive Putin cheerleaders who are easily led astray by Jew propaganda. Putin is an incompetent Asperger clod of Zionism and Russians deserve much better.

Habib
Reply to  klove and light

Iran will bash Turkey into place, but turks will run back to NATO. NATO will protect Israel at all costs, therefore Putin waiting for EU to form own army, cut out UK and USA interference, Russia to be the middleman between Turkey and Iran. Yet Germany can not be offended as German ties are more important than Iran ties. Remember Putin is Christian he is not there to strengthen Islam.

Russia can sell one nuke a year and stay happy. 5 nukes a year and there will be no where to store the money.

this should be last ceasefire if its broken Russia and SAA should not stop till the border of idlib and Alleppo. Turkey should be thaught a lesson for supporting terriosit

Not if little Putin can help it. He is putting Russian lives in danger too with these moronic ceasefires that are basically R&R and rearming breaks for the Turkeys and their terrorists. This latest idiotic ceasefire conveniently came as there was internal opposition growing in Turkey and now ErDog is using it to expand the Turkeys footprint in Idlib with 3 new OPs way out in the south. This is absolute idiocy and fatal for Russian, Syrian and all axis of resistance allies as Americunts and NATO poodles will now restock their terrorists and provide more lethal weaponry. ErDog will be further emboldened and also put more pressure on Greece. He is already acting as a tinpot Field Marshal if you look at the latest TRT propaganda video of him sitting at MIT headquarters giving goat fucking instructions to the Turkey generals who look like kebab stall owners and totally unprofessional and shabby looking old men.

I mean its that fricken obvious that every cease fire turrkey is re arming, regrouping, but the Russians are sending supplies through the Turkish Bosphorus river, Turkey and Russia really have a love and hate relationship. There is more good than bad when times get better specialily with Turkstream

clear out Afrin, as well, end the war in the north west and turn to the north east to clean out the turks and all western forces

Erdogan should be more concerned of honouring his end of the agreement and judging by his past performances a lot is left to be desired.

Turkey has been betrayed by the Cabal of US, UK, EU GULF STATES AND ISRAEL. Turkey’s only option is to maybe now set up the terrorists into a killing zone for the SAA and Russia. Nobody wants these terrorists now. They are a Frankenstein created by the West. When the US wanted rid of the South Vietnamese Army, they just pulled out leaving the South Vietnamese Army to get slaughtered. THE EU IS NEAREST member of the Cabal Turkey can take revenge on for the betrayal. Turkey will pump a million or so refugees into the EU and the EU will implode very quickly as every EU nation will instantly close their borders leaving Greece to deal with it. It’s a big mess and Turkey should have never agreed to set on fire the house next door to their house.

The zio supporters US, UK, EU were much faster to drop the hot potato and leaving the stupid turkish gypsies alone. Turkey is guilty, as US, UK, EU GULF STATES AND ISRAEL too of supporting terrorists against Syria. But only one has to been fucked until the very end: Turkey with a mouth as big as the universe and as emty as their own heads.

One is sure: The zio supporters US, UK, EU were much faster to drop the hot potato and leaving the stupid turkish gypsies alone. Turkey is guilty, as US, UK, EU GULF STATES AND ISRAEL too, of supporting terrorists against Syria. But only one has to been fucked until the very end: Turkey with a mouth as big as the universe. Syria should now show the world how turkish soldiers were accompanied and protected by russians to leave the observation posts inside controlled areas. Make it like a holywood movie – defeated troops were brought home like children from the kindergarten….. Go Türkü, GO.

Erdogan doesn’t know when to shut up. Putin offered him a face saving measure but now he wants to posture as if he has some influence in Syria. Russia has already shown Turkey what happens when you ignore friendly advice.

Buzzing into Erdogander’s ear was some Deep State Bee: – Oh, You Great Islamic Anti-Ataturk to Be! Listen to me! We have our mid-range nuclear submarines ready to support Your Victorious Holy Conquest of Syria! We will nuke the SAA to show our power for you. You will be the greatest sultan in all history.

So let’s observe the further movements. The ceasefire here is what it always were here: Nothing serious, just time-winning. And since the real gangsters from the Jihadist Beheading&Torturing Inc. will as always not care about the deals made on the top level. Nothing new in Syria’s war zone. Let the games go on, let the terrorists make their choice: get neutralized or kicked out of Syria, maybe their friends in Turkeyland will welcome them and their bitches after losing the last square meter of their ancient gains…

This has to hurt ERDO …

Where is that? And where is the video?

Putin got played by Erdogan again. Putin need go to front line and fight, maybe than Putin will understand Turkey is not Russia friend and will never comply with any agreement. Erdogan can’t be trusted or good partner for Syria or Russia. Again, SAA will pay heavy price, a Erdogan only buying time to send more Turkey troops and rearm militans and fortify its positions in Idlib. Putin got fooled again

Different reception than the USA forces are getting from the KURDS

Ceasefire will get along untill the humanitarian aid to turkey from US arrives.Does NATO and US need peace in Syria.Putin is smart he doesn’t move with speed.He doesn’t use rhetoric words.He moves slowly but achieves everything according to his plans.If he has done in all other Regions of Syria how about this single stronghold.

Turkey is the head of the Arab League this year its proving its self to be the leader of the sunni Muslim world at least cause Arabs just dont have the brain or balls. Without Russia what is Assad’s regime. He really done a lot to piss so many people off.