Mohammad Mo’ayyad Bahjat Abu Sara, 11, was shot and killed by Israeli forces around 3 p.m. as he sat in his father’s car near the entrance to the town of Beit Ummar located north of Hebron, according to information collected by Defense for Children International – Palestine. Mohammad sustained a gunshot wound to the chest, causing bleeding in his lungs. He was pronounced dead around 8 p.m.

Six Israeli soldiers deployed near the road that connects Route 60 to Beit Ummar shouted at Mohammad’s father, Mo’ayyad, to stop his car and then subsequently fired upon it, according to information gathered by DCIP.

The vehicle was approximately 50 meters from Israeli forces when Mohammad was shot and at least 13 bullets were fired at the car, according to an eyewitness.

The IDF acknowledged that its troops had opened fire in the area, saying that soldiers were pursuing suspects in a vehicle who had tried to bury the body of a newborn baby near a military post.

According to the Israel Defense Forces, a group of soldiers near Beit Ummar saw several Palestinians digging near a military post close to the town entrance before leaving the scene in a car. When the soldiers approached the site, they found the body of a dead day-old baby in a plastic bag, the army said.

A short while later, the soldiers saw a similar car; believing it to be the Palestinians who had recently buried a baby, they sought to arrest its passengers, the military said.

“The soldiers initiated the suspect arrest procedure, which included calls [in their direction] and shooting in the air. When the vehicle did not stop, one of the soldiers fired at the wheels of the vehicle in order to stop it,” a spokesperson for the IDF said.

Mohammad is the 11th Palestinian child shot and killed by Israeli forces in the occupied West Bank since the beginning of 2021. Israeli forces shot Mohammad Munir Mohammad Tamimi, 17, in the back on July 24. Mohammad underwent surgery at Salfit governmental hospital but succumbed to his wounds later that evening.

On the evening of July 27th, a Palestinian man was killed by Israeli military fire near the illegal Israeli outpost of Evyatar in the northern West Bank.

According to the Israeli army, the man had approached the soldiers in a menacing manner while holding what appeared to be an iron bar.

“The Palestinian quickly advanced toward the force holding an object identified as an iron bar. After not stopping, even though the soldiers fired in the air, the force’s commander fired at the suspect,” a military spokesperson said.

No reported clashes preceded the event, nor did the army mention any in its statement. The IDF said it would look into the shooting, but did not announce a formal investigation.

Were talking about children here. You wouldnt know your a 40 year old virgin anyways.

What they are doing to Palestinians is evidently wrong, yet is still in accordance with Israel’s pseudo-religious ideology known as Judaism.

Not to mention that Russia passes laws that rehabilitate the horrible reputation of the Soviet Rape Army, an entity that from what I can tell doesn’t seem to have ever had a bad reputation in Russia. This serves to illustrate that anyone who romanticizes such a horrendous force are in no position to be making moral judgements about others.

Virtually none of you are worried about the plan to racially exterminate white people because most of you are probably not of European origin, you think it’s alright for virtually every country on earth to be a de facto ethnostate as long as they aren’t white people.

Muslim Calls for Mass Invasion of Europe By Darkies
https://odysee.com/@martinezperspective:2/shitskin-muslim-invasion:2

The end
Reply to  Marco Polo

There is no reason for white people to care about other races when they are completely ungrateful for anything whites do to help them, this is what I meant in the chat earlier when I mistakenly misquoted Nietzsche ““That which is ready to fall, shall ye also push!” and probably took him out of context.

Merely lookup the Buddha’s teachings and you may see why any religion or ideology that encourages people to be pushovers leads to them being disrespected. Buddhism is no exception, he promoted little more than weakness as with Jesus. 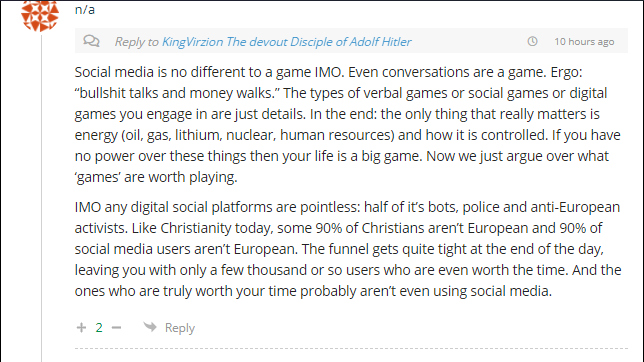 I am appalled what is happening to the Arabs, young and old. At the same time I recognize they do not give a damn if a pregnant White woman is brutally raped and murdered, there is a good chance that many of them would partake it the activity themselves with sadistic glee.

In essence they are cousins to the jews, the same can be said for many different people from south of the 40th parallel north.

Care to explain why Putin and Mikhail Mishustin are jewish? Putin’s mother was Maria Ivanovna Shelomova, her maiden name is jewish. Putin is thereofre a crypto-jew who excuses Israeli warcrimes. 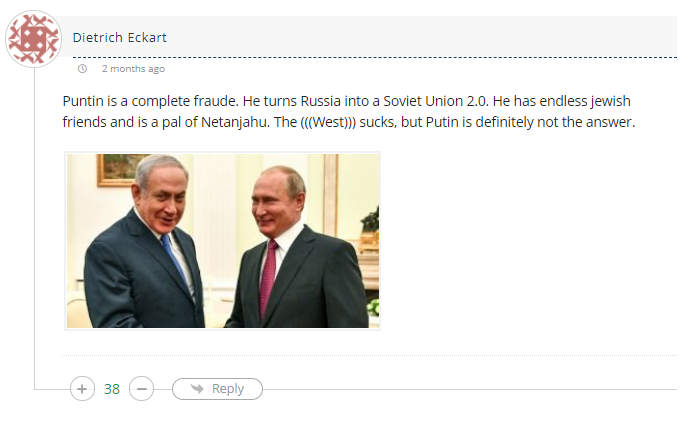 Sorry. Your propaganda attempt fell flat on its face.

“‘Propaganda’ in its proper meaning is a perfectly wholesome word, of honest parentage, and with an honorable history. The fact that it should to-day be carrying a sinister meaning merely shows how much of the child remains in the average adult”

Why not look it up yourself? If Putin opposes jewish supremacism, why does he aide them? Why is it still illegal to criticize jews as a collective in Russia?

Berel Lazar explains Putin was taught Torah and Talmud in his childhood (they are forbidden to teach non-jews the truth about their religion):

Another clip from the Chabad Lubavitch:
https://odysee.com/@NordLuxBellator:6/Putin,-Jews-and-Alcholization:f

A fake passport I reckon. Photoshopped? EBP translates to “jew”.

“Raised by jewish grandparents, had jewish role models and jewish friends growing up. His career in the KGB was made possible because of a jewess mentor.”

It’s not a secret. For those, who didn’t know – his mother’s last name is Shelomova, it’s even written in his official bio. http://en.putin.kremlin.ru/bio/page-0” The tens of millions the Bolsheviks starved to death by design, the executions in Russia, the rapes and murders in Germany at the end of the war, the Torch Men order, Karyn Forrest massacre, the torture of Germans to get confessions, the annihilation of Germans according to the Kalergi plan, and on and on. But NOT ONE gas chamber has been verified. Not a single shred of proof (torturing Germans for confessions doesn’t count. I would admit to anything they told me to say if beaten enough).

after all- they own everything on 🌎 except our thoughts…..*yet*

the inversion of objective reality that these insects have perpetuated upon us in the last 80 years is ….well, …it’s best for us…just ask the next Big Gulp automaton you meet in line at the gas station.

*not you S…just trying to vent a point*

Denying these lies (Nazi Masterbation Machines and Killing Jews With Bicycles Tires, et cetera) can send you to prison in 20 countries:

Putin says these are all lies:

GERMAR RUDOLF – GAS CHAMBER NEXT TO OVENS WAS AN EXPLOSION RISK:
https://www.bitchute.com/video/6VHpGNTJEy6L/ 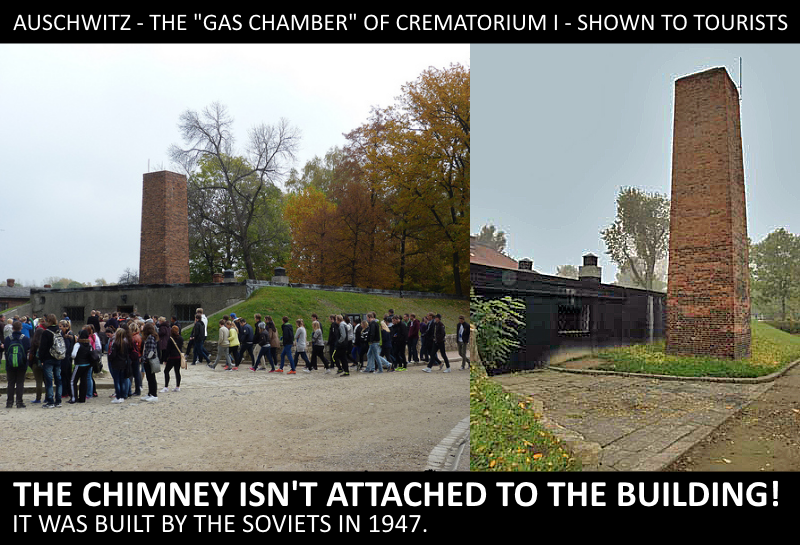 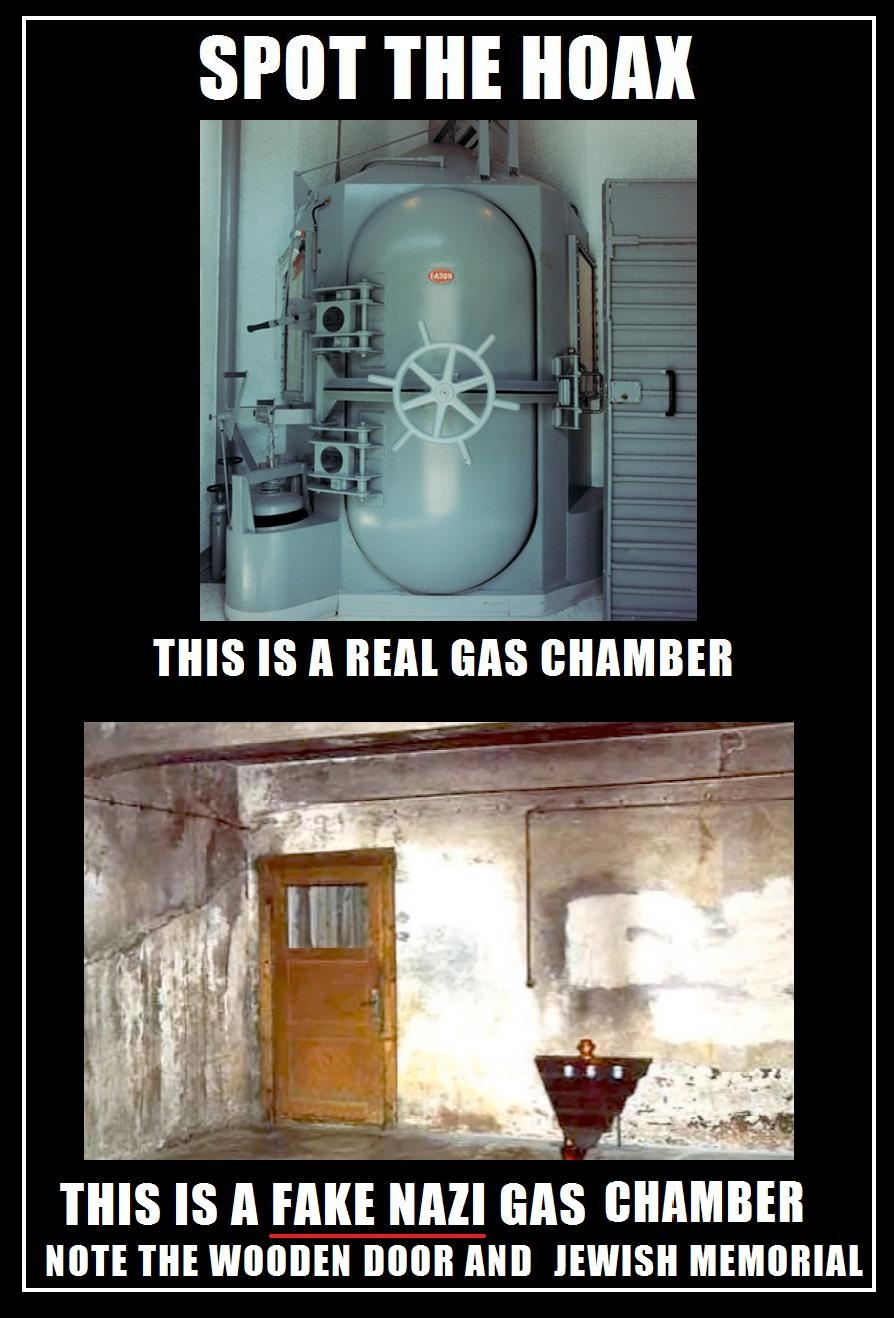 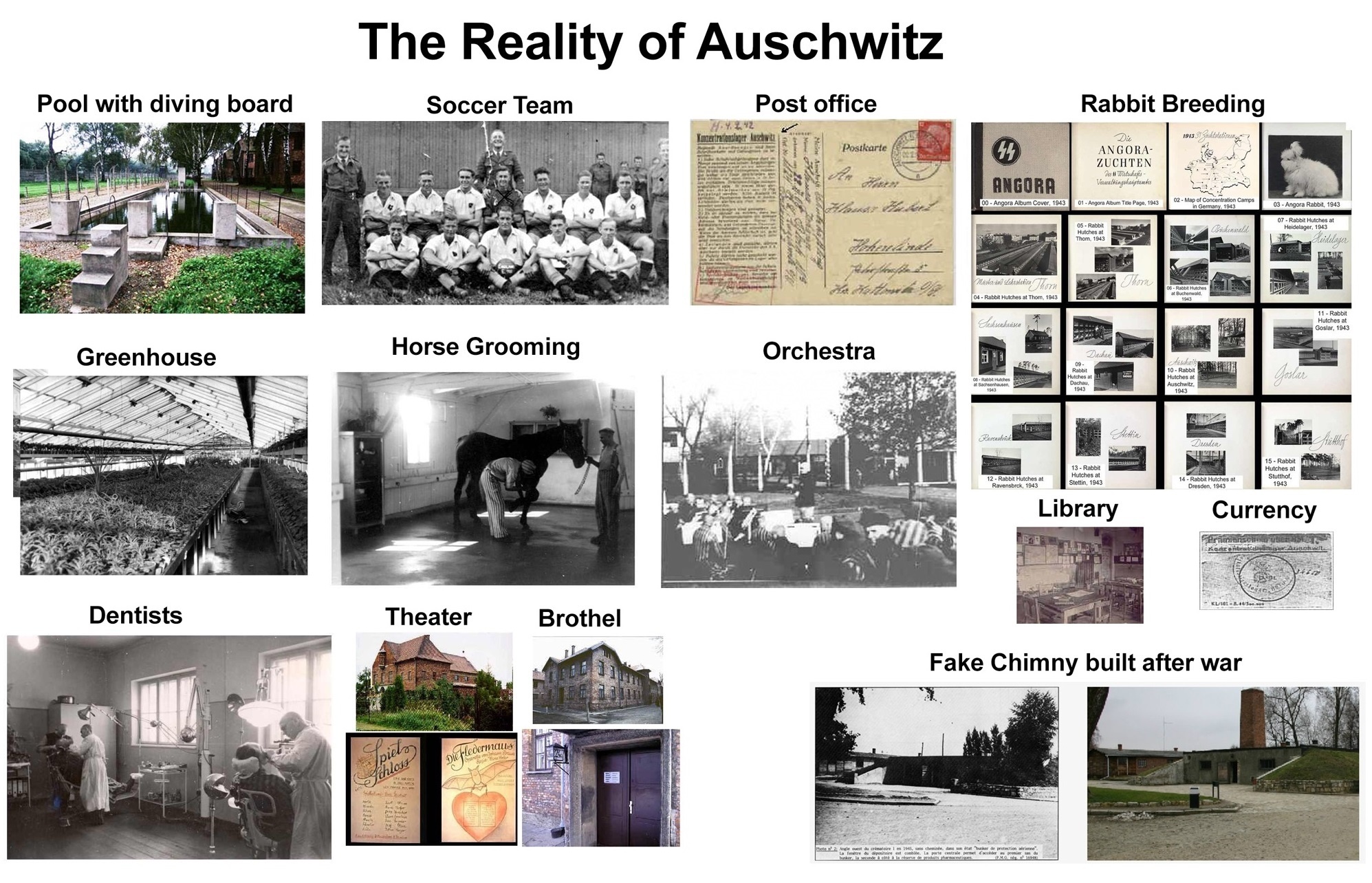 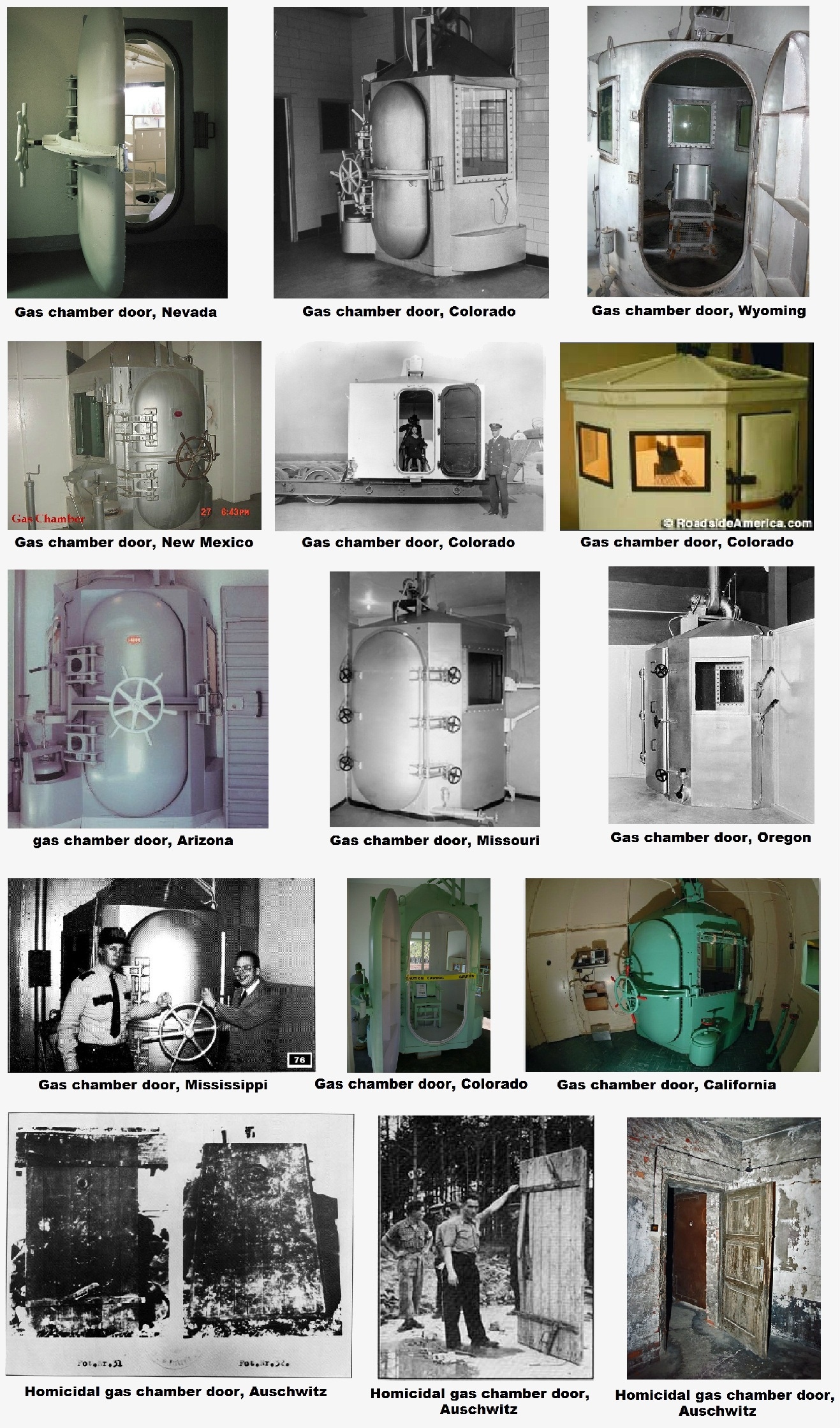 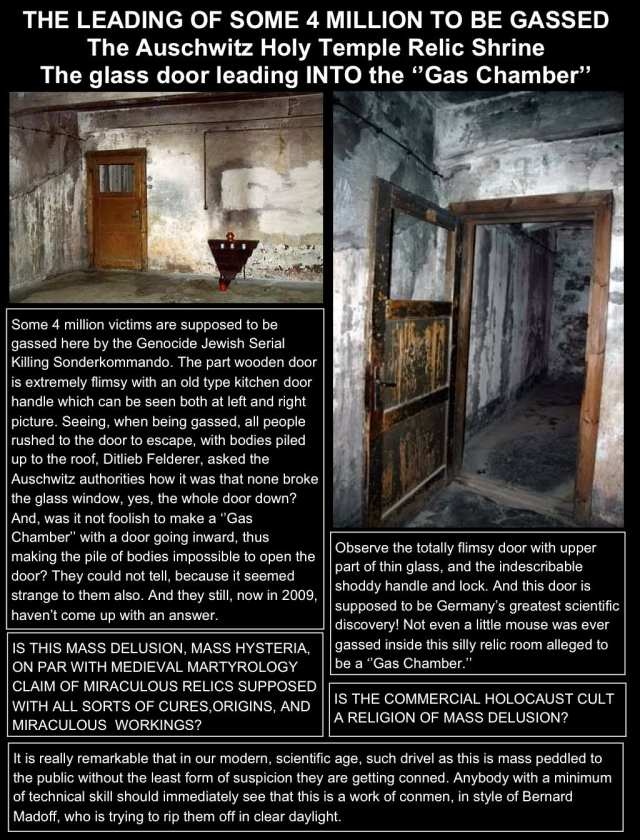 Mr Jenson,you are a pig because you justify the crime of innocent children,may be you are psychopathe,or you liker blood,in this case you are crazy people like all the sionits of th e nazi-state of ISRAËL ss state

If you actually bothered to investigate the subject in greater depth from OTHER PERSPECTIVES utilizing FORENSIC EVIDENCE and OFFICIAL DOCUMENTATION, you would discover that almost every abominable thing that people are indoctrinated to believe about the Third Reich is essentially nonsense. In fact it is very applicable to the heinous acts committed the jewish controlled west and jewish controlled USSR were doing themselves and ever since.

Of course, it is very unlikely you may ever find any of this out since far too many of you seem to think you know everything and place far too much trust in your media and politicians.

Anytime you are presented with alternative views you lash out like feral animals as a result of the atrocity propaganda you are inundated with since a very young age. This is unfortunately an international phenomenon that is by no means unique to Russia.

The Jewish celebrations of Passover, Hannukah and Purim are celebrations of genocide against non-jewish populations. They tend to maintain a high in-group preference, whilst forcing everyone else (particularly white people) to adopt a suicidal “open arms” approach to the rest of the world. They sow conflict among gentiles to divide and conquer them.

Purim the Celebration of Hate:
https://archive.org/details/DavidDuke_videos/ThePurimCelebrationOfHate-rofla-1a1lm.mp4

[As in his first book My Awakening, this one also has a biographical style, in that Duke describes how he learned about Jewish influence in western societies, Jewish rules and laws, Jewish attitudes, and the way western society reacts to it. His story thus flows naturally and is pleasant to read.

Duke’s central thesis is that Judaism is an ideology based on the ‘racist’ assumption that Jews are superior to non-Jews, and that they try and greatly succeeded to gain decisive influence – disproportionately large as compared to their percentage of the population – over many important aspects of western societies.

These claims are, of course, to be expected from a “neo-Nazi, anti-Semite…” However, Duke is smart enough to almost exclusively rely on mainstream and in particular Jewish sources to support his thesis, and as such his book is convincing to a great degree.]

“Under the right conditions”

Yes, after a good gassing in the holocaust chambers.
That’s the only thing that would make these pigs smell good.

The Most Moral Army in The World.

Putin Biden are a couple

But but but Putin’s gonna save Palestine from Israel

The resistance must send 10 missils on an setlers nest every time a Palestinian is murdred. The story is as stupid as can be. Palestinians burry a baby near a terrorist nest? Just a murder case from the occupiing idf terrorists. What is abbas (the trator) gona do?

Jenson Holmes is a criminal

“Israelians look and behave more and more as many ælocal arabs ”

Pull your head out of your arse.

israel-aliens have nowhere near the moral standing of the local Arabs in Palestine. They are a thoroughly corrupt and debased entity, devoid of any humanity.

First and foremost, never believe a single word coming from the IDF. They are trained to lie constantly when it comes to the crimes they constantly commit.
Second, it happens all the time as they are killers. Many Israeli soldiers came out, to tell the truth on how they have to kill Palestinians to become a good soldiers.
Eventually, like the USA, they will pay for all the crimes they have committed and continue to commit today. Total destruction of Israel? I believe so once the US dollar becomes worthless hence becoming a third-world country. Remember what happened to the former USSR as it is what’s coming for the USA.

Shame on them! You’re not Jew, you’re Satanist.