A new Meir Amit Intelligence and Terrorism Information Center report says that ISIS and Israel are temporary allies against Iran.

A new report suggests that in the area of countering Iran’s presence in Syria, ISIS and Israel’s interests may converge, which in a way makes them allies. Despite suggesting no formal alliance between ISIS and Israel, an IDF affiliated think tank Meir Amit Intelligence and Terrorism Information Center reports that interests of both ISIS and Israel align, making them allies against Iran.

Regarding ISIS, the report says it, “will likely change its combat patterns and revert to guerrilla tactics and terrorism following the end of the campaign against it in Iraq, and may carry out hit-and-run attacks against Iranian vehicles moving along the land corridor (Iranian vehicles may be perceived as attractive targets for ISIS in its new incarnation).”

Iran’s intervention in Syria “fans the flames of conflict with ISIS, which retains significant operational capabilities even after the collapse of the Islamic States.” In addition, the report says, “We assess that Iran and the militias under their patronage will struggle to provide an adequate response to this terrorism challenge.”

It continues: “The Iranian presence in Syria increases the likelihood of friction with Israel and may lead to an escalation between the two countries at a timing that is not suitable for Iran.” It says this in light of numerous reports of Israeli airstrikes in Syria, some reportedly close to Damascus, against Iranian weapons transfers to Hezbollah.

The report describes Iran’s goals as: “Bolstering the pressure mechanisms and escalating the threat posed to Israel, while creating a state of deterrence. This is mainly by augmenting the military capabilities of Hezbollah, developing the abilities of Hezbollah to manufacture weapons, and establishing local terror networks in the Golan Heights, with the aim of creating a new front for challenging Israel.”

Now that ISIS is no longer an invasion threat to Israel, Israel can now unambiguously view ISIS attacks on Iran and Iranian proxies as beneficial, which isn’t without precedent. Top Israeli military officials previously spoke among those lines, with Defense Minister Moshe Ya’alon saying that Iran was worse than ISIS and would rather deal with the Caliphate than with Tehran in early 2016.

Tell us something we don’t know. As for the findings of this so-called think tank – sounds like wishful thinking on their part.

This is nothing new. Israel has always supplied and supported ISIS.
Israel’s hospitals are full of ISIS.
ISIS had started skirmishes with Palestine just before Russia got involved.

Yes, nice to use as buffer for almost free.

“..ISIS and Israel are temporary allies against Iran.”

Israel has a long history of terrorism, so their collusion with the worst scumbags on the planet fits right in with Israel’s-democratic-values. The only thing wrong with that statement is the word ‘temporary’; maybe temporary until the next name change perhaps.

Rubbish. Israel just like muslims kill muslims in stead of them.

Virtually anyone who matters already knows about this so there’s no point in hiding it anymore.

They don’t even try to hide it anymore but that’s not for MSM – US sheeple will still be fed with usual BS while their taxes are spent for zio funding of headchoppers.

Once again I agree with every word .

Remember back in 2008, when Netanyahu publicly referred to 9/11 as ‘benefiting’ Israel, same old story with ISIS in Syria and Iraq.
https://www.haaretz.com/news/report-netanyahu-says-9-11-terror-attacks-good-for-israel-1.244044

Everyone knows.. anyone that researchers this for themselves comes to the same conclusion.. the only diffrence is the end game of east vs west. This will be a multipolar world or Russia, China, Iran will lead. I’m American and proud but I’m also aware and honest with myself.

Yes, why not. Did You take Your conclusions among others in a high hat ?

Itan will lead nothing in those matters. At least Dumbo can do flights now and then at TV.

With how many ISIS I have met in Europe, they have told me that we are Jews from Israel, Poland, Russia, and Ukraine. They have shown me the head cover that you see on TV.

Yes you did try to hide that so called ISIS is nothing also than irregular armed forces of US/UK/Israel and their lower vassals (EU). Now Israel is openly admitting it.

You know what, If I followed my government mandated brainwashing from school, I would say “hey the israelis are cool”….

But I don’t…. I expanded my horizons and learned beyond…. And Now I Say: FUCK THE ISRAELIS…

The best IDF allies are the “gentiles” or sheeple. Americans and Sunnis are their sheeple.

Guess who will be doing the “carry out hit-and-run attacks against Iranian vehicles moving along the land corridor “. . .

Some group backed by Mossad. . .

They better hope that none of them get captured.

Lebanon already captured two Israel Mossad’s agents that were fighting alongside of the ISIS.

Who made the Internet, You use right here.

Who uses it for spying on the entire world including it’s own citizens, not only for war planning, buty the overthrow of governments and corporate gains? Who uses it to promote propaganda and block news from outside it’s borders? Which US government agency created it and uses it in conduction of war…. the war department (DARPA).

That goes both way. You can see how americans think russians has been involved in the president campagne.

The power of propaganda wielded by the masters of it, the US.

“Now that ISIS is no longer an invasion threat to Israel,”

This is laughable as ISIS has never engaged in terror attacks against Jews in Israel ,or elsewhere I think:)
By supporting ISIS attacks in the future on Iranian convoys in Iraq and Syria, Israel ( and by association the US) are de facto supporting an internationally recognised terrorist group.

In addition to this , Iran has not burned people alive in cages, murdered tens of thousands of civilians and destroyed all vestiges of past civilisations.
ISIS has done all of these things and much more as well.

Hezbollah was invited to Iraq and Syria and without their soldiers sacrifice the Israeli enabled Black Flags of insane Takfiri killers would be flying over Iraq and Syria.

Except in Philippines, they hold the black flag in Arabic upside-down, strange, almost as if they don’t even know Arabic alphabet to know which way is up???

Private US /Israeli contractors I suppose :)

The US has always supported terror groups, even when these groups were on the US government’s terror lists. They overtly support Nour-al-Din-al-Zenki and HTS (which recently became a moderate opposition!), on top of their covert support for ALL “Islamic” (not really a right word, as they’re mostly Wahhabi) terror groups.

Just look at how they’re BFFs with MEK, a terror cult who us Iranians hate even more than ISIS. And the idiot US government think they can use MEK as an alternative to the current Iranian government!

The US Government has , but they tell the American people the opposite.

But news that need to be kept at the forefront I think and not buried in a swamp of trivia :)

Seems Israel doesn’t realise the price for even supporting the terrorists in a single act for a single second. No more tears for them when they are the target again at some date in the future.

Neither Iran, Syria or Hezbollah want to conquer Israel. That is Israeli histrionics. However, Zionist propaganda conflates the legitimate recovery of the Syrian Golan Heights with the conquest of Israel. However, what is possible is that Hezbollah seize the Northern part of Israel, and hold it as part of a territorial exchange for the return of the Syrian Golan Heights. That is possible. It is also possible for there to be a peace treaty with Syria and Lebanon if borders are established and that Israel abandon the colonial and Zionist and expansionist “Greater Israel” ideology.

When did ISIS and Israel become hostile at its other?

This is the dumbest headline imaginable. It said nothing of the kind. It said that ISIS and Israel happen to both be fighting Iran at the same time. But the stupid jihadis here love to believe whatever idiotic lie is the lie du jour.

Huh! You’re not so bright, are you?
The headline is from Jerusalem Post and there’s a link to it in the article. Since you even didn’t read the article, I put the link here for you. I know, it’s a burden to read something and actually understand it. It’s always easier to run your mouth and leave the thinking for others.

And here’s a link to the source article on the think-tank’s website.

And? The Jerusalem Post admits in their article that it’s not an alliance at all. Just that both happen to share a common enemy at the moment.

to anyone who wants to see what “dumb” looks like, click on eric11210’s name and skim through some of his 37k posts.

I picture him as some pimply college kid in tel aviv working a 9 to 5 as an online commenter in those little hasbera houses they use to try and shape online public opinion.

Ooh. Did you come up with that line all by yourself?

Impressed you didn’t call me a jihadist; your usual stale, exhausted accusation.

Do I really need to state the obvious?

I am a Zionist and a proud Jew. Troll? Not really. Just dealing in facts instead of the fiction you jihadis like to push.

Speaking of fiction describes the Jew History in Palestine and being a Zionist is a lot like being a Athesis since you really do not follow anything about the Hebrew. Just another terrorists supporter.

many, many here are much worse. Even they are not hindus, they will be reborn as worms by gabriel and Allah.

We cant use this stinking tranportatation Gabriel says and Allah confirms it.

“Now that ISIS is no longer an invasion threat to Israel, Israel can now unambiguously view ISIS attacks on Iran and Iranian proxies as beneficial, which isn’t without precedent.”
Oh come on, that was never a risk. Look at the maps your GIS team produces on your own site! Go back a year and see how ISIS has always had a little pocket in Syria, South along the Golan. And they still do!
ISIS no longer a threat to Israel? They never were a threat, they were always working in concert.

Every Spy Agency in the World is Reading this, they mostly read news, posts, comments, watch Tv all day long, two people monitoring one monitor ;) So the one cant hidde something from the other, in america most likely, well its an totalitarian corpocratic puppet regime what do you expect.
Its no joke, they do watch this, especialy after the whole New Yerk Times and Bostonpiss News.

Speaking of Spying, look down below there is one, eric11210

He is a tranplanted member of spice girls.

You realise that I was referring to zionists don’t you?

No, I didn’t. How can Zionists be antisemitic when Jews call anti-Zionists antisemites? You can see my confusion.

It’s the difference between words and deeds; zionism is an antisemite ideology. Some people claim to be Jewish and zionist but they are fools or frauds, sometimes both.

The proverb “The enemy of my enemy is my friend” applies here.

Ha-ha. A think tank for that. How many free meals do they get for that ?

Seemes like all The Middle East Flying Cirkus is here.

According to the many comments 300 millions jews are dominating the many little innocdnt arabs drinking tea in their own version of 1000 years of peace. 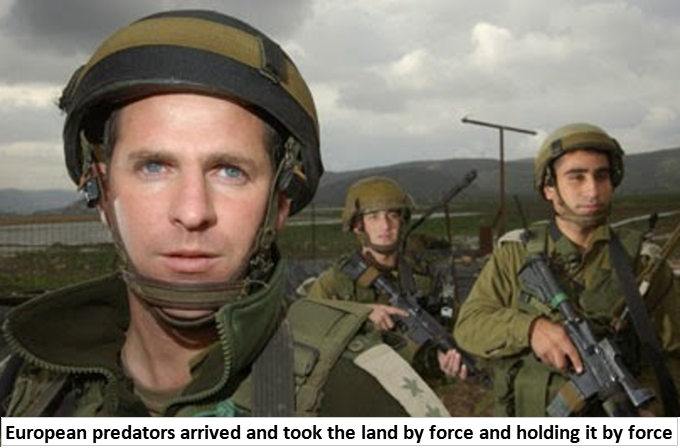