A Lebanese source affiliated with Hezbollah identified on August 25 two fighters of the Lebanese group, who were killed in the recent Israeli airstrikes on the Syrian capital, Damascus. Hassan is reportedly the son of Yusuf al-Zabib, a key administrator in the Hezbollah-affiliated news channel al-Manar.

The Israeli military said that its warplanes struck on August 24 Iranian forces, which were preparing to launch armed drones at its positions. The airstrikes targeted positions in the vicinity of the town of Aqraba, south of Damascus.

Hezbollah has not released any official statement on the incident, so far. However, the group’s Secretary-General Hassan Nasrallah is expected to reveal details on the incident in the upcoming speech.

We will know the details of the dead in Israel, where the response missiles will have arrived.

Hezbollah is nothing before Netanyahu, the cowards were slaughtered like lambs in the Mazraat Amal strikes and did nothing

Cowards that best describes the IDF, you Israeli mammas boys couldn’t even take little Gaza, frankly you an army of pathetic conscripts that have an American taxpayer robbed air force.

Do you know how you sound, a typical inbred false Yid…… you are pushing the World too far, you will be illuminated. BDS.

You know, I think this sounds like Tonto in a new guise. Could even be AI.

may god bless their souls

patience and when the time is right – wipe the squatters off the map forever. a joint middle east anti-israel coalition will do the trick. wipe and swipe them off the friggin map!

Oh Israel achieved nothing of consequence hence their pathetic pinprick air strikes, that are overtime getting smaller, as more air defenses are added in Syria and eventually Lebanon. All the likes of you and Israel are bunch a pathetic cowards, who just plain suck at war. Best example was the fact that Israel couldn’t even take little Gaza in 2014.

Every pathetic strike doesn’t change the fact in the ground on the war in Syria, also most of your pathetic missiles get struck down anyways so yawn you stupid Israelis can’t fight worth shit.

No missiles have been downed lol. Only weak Hezbofags getting smacked with lead while Iranians hide in their holes humiliated ?

You idiot every time you try to strike Syria your missile are shot down, and every time you try the military situation continues in Syria favor. Just look at you jihadi friends recent ass kicking they took in northern Hama this month, your pathetic missile pinpricks change nothing in the ground you weak ass. Again, you Israeli mammas boys are lousy at war. So yawn with your opinion.

No, haha none have been downed. The only thing confirmed is that Hezbollah is dead and Israel shoved a drone up their ass in downtown Beirut was too. How embarrassing, Nasrallah just admitted all of this

Again monkey, your airstrikes are inconsequential and irrelevant, it doesn’t change the fact Israel more constrained then ever. Its air strikes are getting more useless as time goes buy, but seeing how stupid you Israelis are, no wonder why you keep responding to me. Pathetic.

None of these strikes change anything on the ground, Hezbollah is stronger than 2006 when they whipped Israeli ass out of Lebanon & hit a warship with anti ship missiles.

I’m English so its not my country.

about the iranian navy power better to look at gen.Van Riper confess or new results against most advanced US drone or taking british tanker and make their navy watching ?? interesting in the holes you make your alwayse invader enemy to Drawing walls around its borders….
last time someone called hezbollah weak and ragtag army in 2006 we saw the result.

Wrong
Hezollah carried out an attack in 2015 in which the group fired a salvo of anti-tank missiles at an IDF convoy, killing two Israeli soldiers.

There’s no video or proof that ever happened. Israel killed an Iranian general , and 2 Hezbollah commander plus 4 other members so Hezbollah had to pretend to retaliate 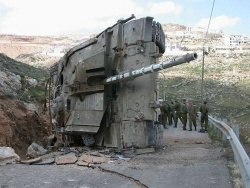 Oh no a random picture of 1 tank lol, noooo it’s all over

Israel killed 500 Hezbollah according to Lebanon and the UN

without the american technology support the kikes is lost..

Hezbollah outnumbered 10-1 and the Jews had to go home with their tail between their legs. Now they are trying to instigate retaliation because they believe they can manipulate the stupid goyim golem America to do their fighting for them.

Fuck off you boy, you all taking that big bomb soon, so enjoy, whilst you can, you turd in our World.

It’s clear Israel is the aggressor here nonstop attacking its neighbors since 2012. Hezb/IRGC hasnt attacked Israel ONCE since 2006, literally. Israel is begging for another war. And they will be begging for US intervention and calling it anudda shoah when Hezbollah starts smacking them hard

Iran is so embarrassed rn, they’re mad at Nasrallah for admitting casualties after denying anything happened

God Bless them, pure of heart and mind, God will shower them with his merciful love.

Israeli military said that its warplanes struck on August 24 Iranian forces, which were preparing to launch armed drones at its positions…

NASTY ZIONISTS and HOW WOULD YOU KNOW IF SOMEONE WANT TO ATTACK YOU OR NOT!
Always the same rhetoric, pre-planned defencive speech and everything is been excused. They have the right to do whatever they want, with pre-fabricated stories. They are like babies, like little children, so obvious for the toy or the candy. Nasty Zionism…

The Russian military police were photographed by local reporters on Sunday as they were establishing their positions around the Turkish observation post.

Russian military police
Despite the Syrian government’s demand that the Turkish military withdraw from this observation post and all other posts, the Russian deployment has little to do with pressuring Ankara to leave the area and more to do deescalating tensions in Hama.
The Turkish regime has already refused to withdraw from this observation post and their presence in Morek is no direct threat to the Syrian Armed Forces, as they are completely surrounded in the area.