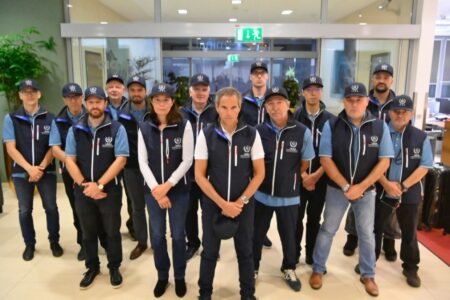 IAEA experts are finally on their way to the Zaporozhye NPP in Ukraine. Head of the international agency Rafael Grossi who headed the support and assistance mission confirmed that the IAEA representatives will arrive to the plant ‘later this week’.

According to the report by The New York Times, the mission of 13 experts led by the CEO of the organization should come to the power plant this week. According to the publication, it includes specialists “mainly from neutral countries”: Poland, Lithuania, China, Serbia, Albania, France, Italy, Jordan, Mexico and Northern Macedonia. The delegation does not include representatives of the United States and Great Britain.

The Wall Street Journal reported that IAEA employees can bring spare parts, radiation monitoring equipment and other equipment to the station. The will reportedly stay at the NPP from August 31 to September 3.

In turn, the Kremlin claimed that Russia will ensure the safety of the IAEA mission in the territory that is under the control of the Russian military.

According to the spokesman of the Russian president, the IAEA experts will arrive at the station through the territory controlled by Ukraine, where Kiev will be responsible for their security.

“In the territory controlled by Russia, security will be provided at the necessary level, taking into account the risks that constantly prevail there and are associated with the incessant shelling by the Ukrainian side. Entry into this territory is carried out from the zone controlled by the Ukrainian armed forces, where Ukrainians provide security. We consider this mission necessary and we believe that all countries are obliged to put pressure on Ukraine so that it stops exposing the European continent to danger by shelling nuclear power plants,” Dmitry Peskov said.

The Russian official clarified that Moscow is interested in the IAEA mission. When asked by journalists who is involved in the negotiations on the admission of the organization’s specialists to the NPP, Peskov said that he could not say, but added that they include military officials.

The head of the IAEA had previously declared the possibility to permanently deploy several specialists at the NPP to what the Russian spokesman commented that the possible ways of work of the IAEA specialists will be discussed on the spot, ‘it all depends on the details’.

When asked whether Russia agrees to the creation of a demilitarized zone around the power plant, he noted: “There is no such a question.”

Kiev and the G7 demand that the Russian military leave the nuclear power plant, as their actions “threaten the population of Ukraine, neighboring countries and the entire world community.” The Russian side says that it does not use the power plant for military purposes and does not place heavy weapons on its territory. The Russian Foreign Ministry criticized the idea of creating a demilitarized zone in the area of the NPP, explaining that this would make the station “even more vulnerable.” The Kremlin called on countries “that have absolute influence on the Ukrainian leadership” to force Kiev to stop the shelling.

While the international specialists are on their way to the Zaporozhie NPP, the facility is shelled by the Armed Forces of Ukraine.

On August 29, the Russian Defense Ministry reported that a Ukrainian UAV was intercepted over the nuclear waste storage facility at the NPP.

“The staff  monitors the  situation at the station, the radiation level corresponds to the norm”, the department says.

The authorities in the Russian-controlled territories of the Zaporozhye region also confirmed the ongoing shelling of residential areas of the city of Energodar where the Zaporozhie NPP is located. At night, Ukrainian forces shelled the residential areas in the city, wounding almost a dozen of civilians.

According to the local regional administration, four artillery strikes from US-made M777 howitzers were recorded in the city. The attack was carried out from Ukrainian positions in Nikopol. Then at least five people were injured, one woman and one man are in serious condition.

Local pro-Russian authorities blamed the Kiev regime for an attempt to disrupt the IAEA mission to the NPP. If Kiev has ‘anything to hide’ at the plant, any provocations and even attacks on the international mission should not be excluded.

It was previously reported that the fifth President of Ukraine, Petro Poroshenko, contributed to the preparation process for the creation of nuclear weapons in Ukraine in 2014. According to him, Kiev began to create the necessary technological means back in 1994, after the signing of the Treaty on the Non-Proliferation of Weapons.

Sergei Naryshkin, Director of the Russian Foreign Intelligence Service, also declared that there were developments on the creation of nuclear weapons in progress in Ukraine. According to the Russian Defense Ministry, Ukraine has retained the necessary technical potential, and Ukrainian capabilities are higher than those of Iran or North Korea.

Look at all the nigha posers with their smug faces. I am pretty sure they cannot tell a difference between fusion and fission 😆😆😆

Please let me correct the statement above. There are no neutral NATO or EU countries. This is bullshit at best. LAME!

The above is a photofit picture where you are asked–

Mark Twain – “reports of my death have been greatly exaggerated “–

Yes Ukraine is shelling Kherson using US -HIMARS but Ukraine has now admitted that they are LYING about Ukraine,s attacks to demoralise Russian troops -Mikhail Podoliak “bum boy” to Zelensky ADMITTED it –Quote- ” certainly –ALL public comments are part of the information war “.

Check all their tattoos!

??? mainly neutral ??? Except China I see only those being part of the war.

what will come? They can’t reach it by using Urkainian area and this will be claimed against Russia.

Overall, the USA want to create a “NATO article 5 issue”.

Serbia is pro Russian and will surely be making sure things are done above board, and with China being represented as well, maybe it will turn out OK?

If maybes were babies, we’d run out of milk.

Marching on Orders
Reply to  Hjalmar

Probably the Serb was an Otpor member.

It absolutely is the Jews
Reply to  Peter

Mexico is not anti-Russian and has been doing business with Russia.

Marching on Orders
Reply to  Peter

Was Ukraine granted veto power again on what they release?

Good day Russia ! Military Academy is going to announce another ukropizdan army ‘record’ as of 29.VIII.2022: Today the number of KIA hohol banderist nazi trash has reached 70.000 !!!!!!!!!!!!!!!!!!!! meanwhile the russian side has 13.000 in total. As we said previously, the ratio is going to be improved day by day in favor of the NATO whores destroyers, now has passed the vital 1:5 one. The casualties toll for the Kiev ameriscum junta just accelerates as we predicted. But for the Ze fag cocaine sniffer this is yet manageable. According to our calculus, russians MUST introduce a minimum of fresh 5 BTG’s to start an unmanageable casualties for the ukrop reichs army. And every 3-4 months another batch of fresh 5 BTG’s to speed up the casualties ratio on a more difficult situation for the bandera werhmacht. If so, with 15 new BTG’s and 9-12 months by now, the denazification of the proposed Ukropizdan area will be finished, including Nikolaev (but without Kharkov or Odessam, which requires more than this carousel) Keep in mind those numbers, and start counting……..NOW !

The fact that the United States and Great Britain did not send representatives is an admission that Ukraine is shelling the facility. Either way, Americas Jewish controlled media will not report about any of this.

The reps from some of those countries are not there to verify who is firing onto the Nuclear Power Stations, they are targeting experts. To be sure their drones and satellites have more accurate information of the most vulnerable areas of the power plant. Better data, bigger booms. Russia be warned you are bringing in a Trojan Horse.

John Bolton showed up at the photo-op and said he knew where all their kids lived.

Is the public really this brain dead?
Reply to  Ignorance Is Strength

This is so stupid. Ukraine comes up with some nonsense that 1) Russians are shelling it to blame Ukraine and 2) Russian troops are firing from there so Ukraine must fire back, both fantasies in one paragraph.

US has total sat coverage on the sight and if Russian troops were firing from there, they’d be plastering the sat pics all over the MSM.

Pure bullshit. At least the 50% of westerners to the right of the IQ bell curve aren’t swallowing it.