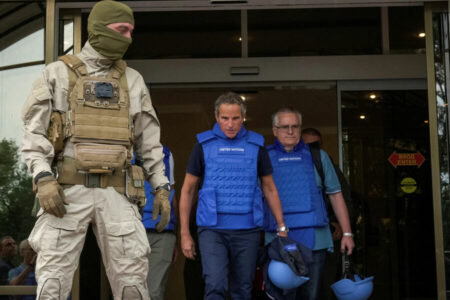 IAEA must remain apolitical despite pressure from Ukraine.

The head of the International Atomic Energy Agency (IAEA), Rafael Grossi, contradicted Ukrainian authorities on August 31 by stressing that his visit to the Zaporizhzhia nuclear power plant was a “technical mission” that aimed to prevent a nuclear accident. His comments came as Kiev claimed his visit was a step towards “de-occupying” the power plant from Russian control.

Grossi, who led the mission, arrived on August 31 to the Ukrainian city of Zaporizhzhia, near the powerplant. Asked about whether the plant could become a demilitarised zone, he said that “this is a matter of political will”, adding:

“But my mission – I think it’s very important to establish (this) with all clarity – my mission is a technical mission.”

“It’s a mission that seeks to prevent a nuclear accident. And to preserve this important (nuclear power plant),” he said.

On August 31, Ukrainian Energy Minister German Galushchenko told Reuters that the IAEA mission to the Russian-held Zaporizhzhia nuclear plant was a step towards “deoccupying and demilitarising” the site, prompting Grossi to stress that it was just purely a “technical mission”.

The nuclear power plant, the largest in Europe, was captured by Russian forces in March but is still operated by Ukrainian staff. The site is less than 10 km away from Ukrainian positions across the Dnipro River and has come under repeated shelling over the past month, with Ukraine and Russia accusing each other of being responsible.

Many are finding it hard to believe that Russia is responsible for the shelling as it has nothing to gain by destroying vital infrastructure that it already controls. Meanwhile, Ukraine could be motivated to shell the plant as it can continue manipulating Western audiences via its intense media campaign by denying such attacks and claiming that Russia will soon be responsible for a nuclear catastrophe.

Arriving at the site, Grossi said:

“The difference between having the IAEA at the site and not having us there is like day and night. I remain gravely concerned about the situation at the Zaporizhzhya Nuclear Power Plant – this hasn’t changed – but the continued presence of the IAEA will be of paramount importance in helping to stabilise the situation. I’m immensely proud of the critically important and courageous work the IAEA team is now able to perform at the ZNPP.”

Although Kiev attempted to manipulate such statements to mean that Russia will soon abandon the site, it also means that there will be neutral observers to any future attack against the power plant. Despite it not being the IAEA’s mission to hold anyone accountable for attacks as their focus is purely technical, they will be eyewitnesses to any strikes, and Kiev might want to avoid another fiasco like the uncovering of the “Ghost of Kiev” and “Snake Island” myths.

Explaining the nature of his trip, Grossi said:

“Our team on the ground received direct, fast and reliable information about the latest significant development affecting the plant’s external power situation, as well as the operational status of the reactors. We already have a better understanding of the functionality of the reserve power line in connecting the facility to the grid. This is crucial information in assessing the overall situation there.”

With Zaporizhzhia nuclear power plant working at limited capacity, it also means that Ukraine misses out on potential new opportunities for revenue, especially at a time when Europe hopes nuclear energy can help offset the loss of oil and natural gas imports from Russia that were imposed through self-destructive sanctions, which are now massively backfiring.

Although Germany planned to close all of its nuclear reactors by the end of the year, there is debate on whether to keep them open as the country faces an economic crisis not seen since last century’s two world wars. Neighbouring Belgium, which was planning to close two reactors by 2025, has decided to keep them operating until at least the 2030’s. France, going in the complete opposite direction to Germany and Belgium, is looking to build an additional 14 reactors over the coming decades, as are the United Kingdom, Czech Republic, Poland and others.

None-the-less, Kiev’s attempt to politicise the IAEA mission completely failed as the agency made it clear that its only intentions are technical in nature. This will not deter Kiev from continuing such attempts of politicising the agency, and it remains to be seen whether the IAEA will go down the path of the Organisation for the Prohibition of Chemical Weapons (OPCW), which was humiliating caught-out covering up a damning report regarding Syria and lost its credibility.

In 2008, Iran carried out more sex changes per capita than anywhere else in the world with the exception of Thailand. They have not banned it and neither has China. Such operations should not be conducted anywhere, anyone who thinks they are the opposite sex born in the wrong body should be sent to a mental institution immediately, as should all homosexuals and bisexuals.

Nonsense, your are what you are. If your a dude and you like dicks, thats ok. You have nothing to say for someonelses sexual preferences.

Get off your ivory tower dipshit, it aint because of the gays were paying crazy energy prices.

Firstly the BBC talking about Iran isn’t a reliable source, they’ve also spent years talking about the repressive culture and so on, but if you ever watch actual Iranian TV channels it’s pretty obvious it doesn’t exactly fit the description. It can be a more complicated question though, there can be genuine medical reasons to require action, some people are hermaphrodites or deformed, missing bits, or having more than they should and so on. It’s quite astonishing all the unfortunate possibilities if you search it online. I suppose you could take the agricultural approach and bash the ones with serious birth defects on the head with a lump hammer if they don’t look like they will be any good but most societies seem to frown on that when it comes to human babies :). Sex change is a misnomer anyway, medical science is incapable of this, gender is kind of an immutable feature, it’s related to the chromosomes in the embryo. If you read about the precise methods used it’s pretty rubbish and the results often get infected and have to be cut off / out later and so on.

Therapists that help brainwash the sexually confused into getting sex change operations should be killed. Kill all surgeons who conduct such operations, eliminate all who prescribe hormone blockers.

Even though I was born a male but I have personality of a bitch. Everybody hates men with bitchy attitude. So why can’t I be a female?

Round them up, put them on trial and tell them the truth is now endorsed instead of deception. Hear their side of it. Lock them back up, have them appear again and then hear their side of it again. THEN deal with them. Also send exorcists to decontaminate them.