Earlier today Hillary Clinton offered up what some have described as one of the most delusional interviews of all time at Recode’s CodeCon conference, in which she blamed everything and everyone, including but certainly not limited to: FBI Director Comey, “1,000s of Russian agents”, right-wing media outlets, Russia, sexism, WikiLeaks, Russia, a funding deficit at the DNC, the Supreme Court’s decision in Citizens United, the New York Times (yes, the NYT) …oh, and Russia, for her 2016 election loss.  And while she certainly “takes responsibility” for every decision she made, Hillary desperately wants you to understand that’s not why she lost…because, you know, Russia.

“I take responsibility for every decision I made, but that’s not why I lost.”

Of course, in all of her rambling, Hillary never offered up a viable conclusion on why “Russian hackers” were only able to sway voters in Wisconsin, Michigan, Ohio and Pennsylvania but not in places like Virginia, Nevada, New Mexico and Colorado, states where anti-Russian tinfoil must be impervious.

The following tweet pretty much sums up the interview.

So Trump, who the left thinks is a moron, according to Hillary organized Macedonian websites, Russian agents, algorithms, & cyber hackings

Here are some of the details:

Starting with the Russia narrative, Hillary would like for you to know that Putin’s primary goal is to topple the U.S.

Moreover, it’s almost certain that he colluded directly with Trump in this effort, because how else could Russian agents possibly know that American’s might like to better understand Hillary’s efforts to collude with the DNC to undermine the campaign of her competitor or how she used TV personalities to steal debate questions in advance… please, that kind of insight could only come from Trump himself.

“It’s important that Americans…understand that Putin wants to bring us down. He was an old KGB agent.”

“We saw evidence of [Russian involvement] and we could track it. But they were shooed away.”

“The Russians are increasingly..launching cyber attacks. A lot of the information they’ve stolen they use for internal purposes. So this was different because they went public.”

“That was the conclusion. I think it’s fair to ask how did that actually influence the campaign and how did they know what messages to deliver. Who told them? Who were they coordinating with or colluding
with?  I’m leaning Trump.“

“Within one hour of the Access Hollywood tapes being leaked, the Russians or say Wikileaks — same thing — dumped the John Podesta emails.”

“The Russians in my opinion could not have known how best to weaponize that information unless they had been guided by Americans.”

Ironically, even though ‘Russia’ somehow used her emails to undermine her entire campaign, the content of her emails “was the biggest nothing burger ever.”

“My email account was turned into the biggest scandal since Lord knows when.  And, you know, in the book I’m just using everything that anybody else said about it besides me to basically say this was the biggest nothing-burger ever. It was a mistake. I’ve said it was a mistake, and obviously if I could turn the clock back I wouldn’t have done it in the first place. But the way that it was used was very damaging.” Moreover, even though most of the stories that we and other media outlets covered came directly from the DNC’s and John Podesta’s own emails, Hillary would like for you to know that it was all “fake news”… just like it was “fake news” when Donna Brazile told everyone that she didn’t share debate questions with Hillary.

“They were run of the mill emails.  Stuff that were so common. Within one hour they dumped them and then began to weaponize them. They had their allies like Infowars say the most outlandish, absurd lies you could imagine. They had to be ready for that.”

“That really influenced the information people were relying on. If you look at Facebook the vast majority of the news items posted were fake. They were connected to, as we now know, the 1000 Russian agents… They were connected to the bots. It was such a new experience. I understand why people on Facebook would think ‘oh Hillary Clinton did that. I did not know that.'”

“Fake news…lies that’s a good word too.  The other side was using content that was just flat out false and delivering it in a very personalized way. Above the radar screen and below.”

Meanwhile, Hillary seems to still believe CNN’s report that Comey was duped into re-opening her email investigation on October 28th by a “classic piece of Russian disinformation,” a report that CNN has already retracted and we proved was pure “fake news” at it’s finest (see “‘Secret’ Russian Doc Influenced Comey’s Hillary Probe Even Though He Knew It Was Fake: CNN“).

“We know it hurt us, as I explain in my book, the Comey letter which was now we know partly based on a false memo from the Russians. It was a classic piece of Russian disinformation. So for whatever reason, he dumps that on me on October 28 and I immediately start falling.”

Moreover, despite what you may remember from that original Comey press conference last summer, Hillary wants you to know that she was “very responsible and not at all careless” when it came to the handling of her State Department emails…

“Well if you went all the way back, doing things that others have done before was no longer acceptable. I didn’t break any rule nobody said don’t do this. I was very responsible and not at all careless. You end up with a situation that was exploited.”

Which we believe is somewhat contradictory to the FBI’s finding…but it’s hard to tell..you be the judge:

Meanwhile, despite pretty much every major media outlet, with the exception of Fox News, dedicating their networks to cheerleading for the Hillary Clinton campaign, Hillary was also convinced that she lost because CNN, MSNBC, ABC, CBS, NYT, Washington Post, etc, etc, etc are not as “effective” as the “media forces on the Republican side”… or Russian propaganda for that matter: apparently RT’s YouTube channel has greater reach and more influence than virtually every paper of record in the US.

“Here’s a really telling statistic that has been validated. I had this old fashioned idea that it would matter what I would do as president. We had a great tech program and a really good set of policies. In 2008 which as the last time you had a contested election, the policies put forth by President Obama, Senator McCain got 222 minutes of airtime. In 2016 despite my best efforts, we got 32 minutes, total, over 18 months.”

“Media forces on the Republican side are entrenched and very effective.  They’re beginning to call the shots on those local stations. Local TV is still incredibly powerful.”

Oh, and she also lost because of sexism…

“I have been on many speaking platforms with many men who are in office or running for office. And the crowd gets you going and I watch my male counterparts and they beat the podium and they yell and the crowd loves it. I have tried that and it’s been less than successful.”

…and because she got pizzaid for some Goldman speeches

“I have to say, Walt I never thought someone would throw out my entire career…because I made a couple of speeches.”

But, if there was one silver lining in today’s interview, perhaps it came when Hillary confirmed that she’s not running for President ever again. With the CodeCon scapegoatravaganza all but assuring that Hillary will go for the trifecta in 2020, that was the only real “fake news” today.

Maxine Waters and Hilary Clinton should go on the comedy circuit, because they are hilarious, without knowing it.

I understand that Cathy somebody – a well known New Year’s Eve ‘comic’, is looking for work.

Is that the one who specialises in impersonating ISIS and frightening young kids?

Throw in Pelosi for an unholy trinity of worthless hags.

Actually, I was thinking of her, but, too lazy to add her to the list. Haha.

Why give this demented old hag any publicity?

I hope she gives many more of such interviews. We only have to sit back and watch herself implode in the public’s mind. If she had been quiet or taken up some worthy charities for a couple of years she could have come back in 2018 and relaunched herself, as the public would have forgotten the bad and remembered only the good. Now we’re constantly being reminded of the bad. And she does it all herself.

i was thinking the same, this drunken psychopath should be just stay home and enjoy the money she took through the clinton foundation.

It’s never happened in any US election that the losing candidate kept talking, whining and bitching so much time after the vote.

It’s a shame, the US were the country where “After the election the country re-unites and let the President do his job”. Just another sign on how much the US democracy has been reduced to a mere word, whose significate most people don’t even know

So that we never forget how delusional she was?

It only applies to the US. Majority of the remaining global citizens don’t give a shit about her or the US.

We came, we saw, she failed…. /giggle

Karma is a real fucking bitch….

Narcissistic Personality Disorder.
In its true full-blown Cluster B form it is rare – maybe 5% of population – though hard to estimate real figures, as those affected do not actively seek medical assistance, as they perceive themselves as a faultless party, who is subjected to perennial victimization by others.
They suffer from highly distorted thinking patterns – and will rewrite past events and interactions on a shifting basis to protect their fragile sense of self identity. In short, when they open their mouths a load of distortions, half truths and outright fabrications inevitably pour out, because that is their primary and maladaptive life strategy to cope with any serious challenges to their (grandiose) self identity.

When you’re rally super smart and very-well funded like Hillary Clinton and her Presidential election team and you lose, you HAVE to be the victim of some kind of ‘dirty pool’. There just isn’t any way you could actually be dumb enough to torpedo yourself, is there? Like, that would be ‘hubris’ or something – an anthropmorphical religious concept – and that’s just plain stupid.

But stupider things have happened. And America, as a national entity, has been on a solidly ‘stupid’ tack since 2001.

Except for prosecuting you and your DNC cronies for interfering with a US election, no one cares what you think Hillary. Your incessant whining/dirty tricks have ended your political career…thankfully.

Hell holds a keyboard? Isn’t she dead yet?

according to certain people.. she was replaced before the first DEBATE..
Double or Clone… I do not know!!

That or she was seriously hopped up on something. 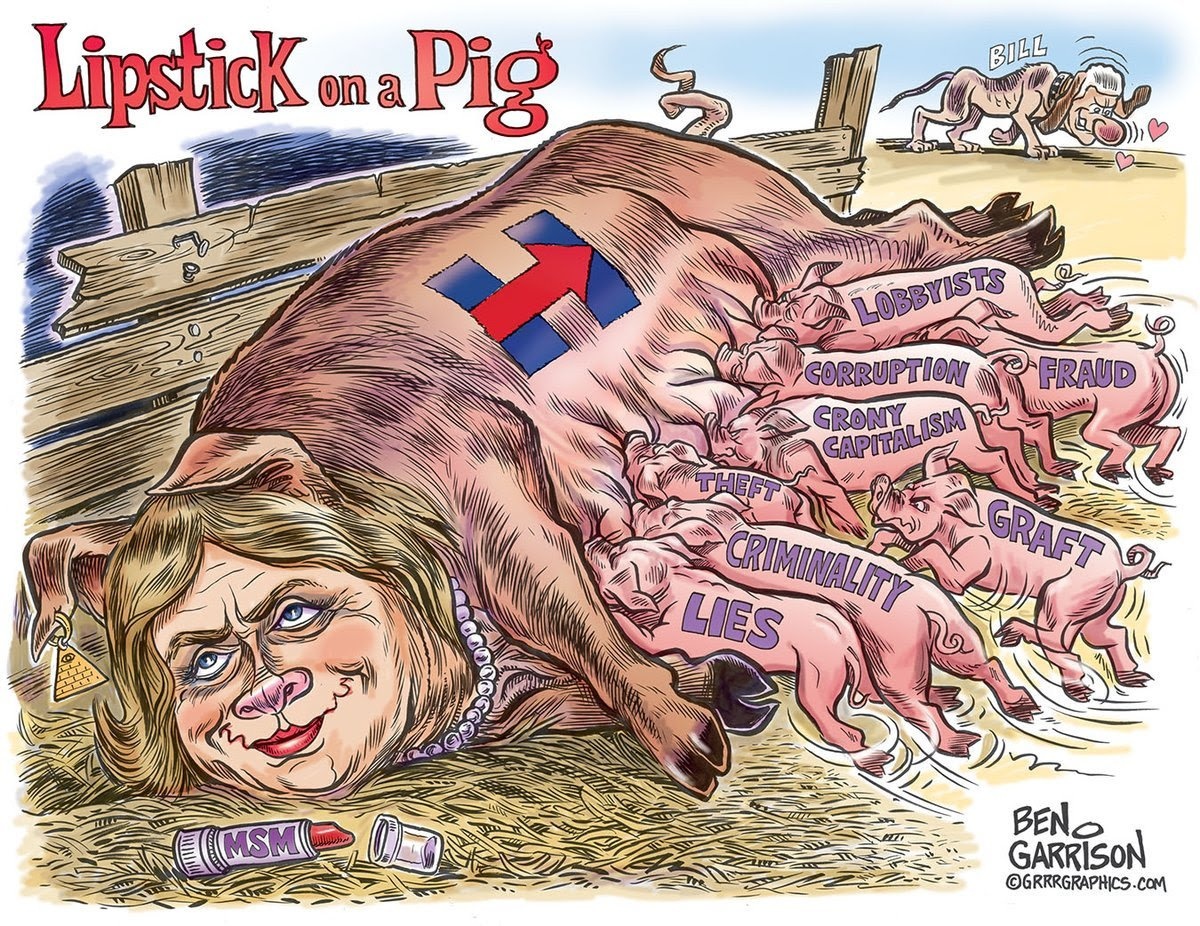 ““I take responsibility for every decision I made, but…”

HRC should only refer to and focus on her own butt.

Let me rephrase that line for her: “I take full responsibility for everything I fucked up and everybody I fucked over. Full stop.”

Imagine this insane, delusional, raving psychopath as the president.