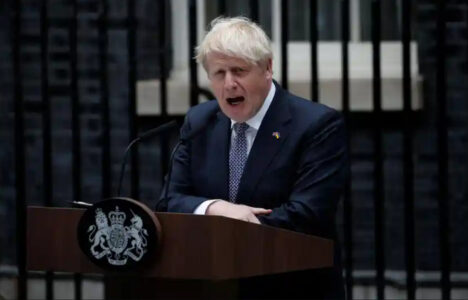 Less than three years ago, Boris Johnson led the Conservatives to their biggest election victory since 1987.

“To you, the British public, I know there are many people who will be relieved … and I want you to know how sad I am to be giving up the best job in the world,” he told the nation from outside No. 10 Downing Street — the office and residence of Britain’s prime minister.

The embattled British leader added that he would appoint a new cabinet in the meantime, after a historic wave of resignations from government officials who called on him to step down. After a string of scandals, dozens of lawmakers from his party resigned from the government over the past two days, urging Mr Johnson to step down immediately.

He said he had agreed that the “the process of choosing that new leader should begin now “. A timeline for the selection process will soon be announced.

“To that new leader, I say I will give you as much support as I can,” said Johnson, who faced a party revolt and historic wave of resignations by government officials this week after a mounting list of scandals.

“I want you to know that from now until the new prime minister is in place, your interests will be served and the government of the country will be carried on.”

In his speech, Mr Johnson assured that the UK will back Ukraine “for as long as it takes”.

Boris Johnson said he was “immensely proud” of his achievements as British prime minister, citing the national response to the coronavirus pandemic, the country’s support for Ukraine in the battle against Russia, and Brexit.

Meanwhile, Russia’s State Duma Speaker Volodin commented on the resignation, claiming that Johnson is behind the shelling of Russian civilian cities of Belgorod, Kursk.

“The clown is leaving… A close friend and patron of Zelensky, British Prime Minister Boris Johnson is forced to leave his post. Despite all his attempts and efforts, he failed to survive.

Boris Johnson is behind the shelling of our peaceful cities — Belgorod, Kursk. British subjects should know this. He is one of the main ideologists of the war against Russia to the last Ukrainian. It is right for the leaders of European states to think about what such a policy leads to.”

hahahaha I earn nothing …but happy as Larry as long as hoholassholes are kicked…SLAVA ROSSIYA!

They should use less time in the beds having fun and think harder to feed the children, they already has.

The word crowfunding was invented by them, UN and UNICEFF.

Next time they have problems we should parashute criminal pigs and wine. That migh be a gamechanger.

Wellcome to Russia Boris, we have something for you here, to have a look, please come to a visit!

Ha ha. They will clone him and send them back🎈

Just changing the Pedos lgtbs nazis dont change nothing…… Boris and Tony Blair should be hanged long time ago !!!!! they make a lot of climate change, and still dont change sex….but to f ked peoples money and live its ok !!!

oh yes and the pedo queen and Royals make a blow job to Tony ( mafia ) Blair !!!

Jubileus For the FcuKinghan Palace !! let the slaves eat bugs….!! because of climate change in the anuz !!!

Hahaha! That’s a good one. He had his moment of “honesty”… usualy, they don’t say that for a good reason!

its just bla bla bla ( greta talk ) and then is going to work for the same Pedos !!!

Agreed, but it’s still somewhat enjoyable to see his removal. Time for the next pedo globalist puppet to enter the stage.

BoZo would make such an alluring damsel. Make it happen!

A Benny Hill “salute” to a dangerous ass hat in the long gray line of war criminals since Thatcher!…

Seems now the best job is to be a Clown and a Nazi and build back Worse !!!! ohhhhhhh why !??

Boris lost all bouts against Putin,britain is in ruins because of this silly fascist loser,good fkn riddance! God Bless Mother Russia:

The real issue now is that NATO has lost to Russia and all these bastards can do is bark like an ugly ignored toothless crazy whore. They poured billions into a deadloss corrupt Jew hijacked Ukraine, which historically is Russian land and even an idiot knows that. Now the western brainwashed population is facing dire economic problems, sky high gasoline prices, food shortages, no gas to cook, even can’t tampons to stick us senile Biden’s diapered ass. So now what can they do short of a nuclear war and killing the planet?

The NATO morons totally underestimated Russian power and also how much the world strategic equation has shifted to Eurasia. Russians have done well in sheer military, political, economic and diplomatic terms. The vast majority of the world supports Russia and now with the western warmongering parasitic losers in trouble, Ukraine is already yesterdays news and frankly no ones cares. Now is time for the real Ukrainian Orthodox Slavs to get rid of Zelensky and the Jew cabal and save Slavic lives. No more wars for Jews anywhere.

Your history book is a complet out of order made by Stalin and communist infection.

Why dont You look up sober sources added calderns, maps as Youtubes. Even many very differet writers they dont tell, what You are told and agree in most things.

I hope Your internet one day will get acces to the rest of the world.

Thank you i will not see his insanely hair style again.

Sure. Better with moonlandings on Putin.

I was horrified by the pro pro covid farce and lockdowns from which the shareholders of related ‘medicines’ and other products made a lot of dough, behaving like parasites on the tax payers. The green agendas is another NO NO and the Ukraine war is another no no, PLUS our kiddies are getting sexually explicit porn lessons. Boris forgot about serving the people as he served mulitple agendas. That Parliament made the rules for lockdowns which were way too severe, RUTHLESSLY cruel and against any rights we should have as humans, they themselves paid lip service to them. This shows us that they knew these rules were unwarranted. The NHS and healthcare is screwing the people with the fake vaccination program with the worst side effects of jabs ever. They are screwing us with fake medicines like remdesivir and withholding safe and effective treatments like Ivermectin. The elderly bed blockers were domicided, bumped off. There is euthanasia in the NHS. Toxic fluoride is being put into our water. Awful government and awful MPS out for their own profiteering, parasites on the people and plain EVIL. We need at least 90% of our MPs OUT and all of the current parties to become rubble.

Boris the best blow job in the world.

The news of the resignation of the British Prime Minister expectedly led to a discussion of the consequences of the event and its impact on the politics of Foggy Albion. But it’s worth looking at the situation a little wider – through the prism of global management processes and the latest trends in this direction.

Today, all real world politics is based on the fundamental principle: “True power must always be a secret.” Among those who form the global agenda, there are no clowns and cannot be in principle.

And now let’s just look at the words and deeds of people now sitting in the chairs of heads of state, ministries and departments:

▪️Joe Biden publicly brags about the number of LGBT representatives in the administration.

▪️Olaf Scholz ” swallows” a public insult from a Third World country official and continues to donate money to her.

▪️Elisabeth Truss confuses the Greek prime minister with a singer and does not recognize Russian sovereignty over the Voronezh region during the negotiations .

Does anyone seriously believe that these comically incompetent characters can be real power? When each new Western politician competes with his predecessors in more stupid actions – from idiotic statements to the deliberate creation of a shortage of electricity?

What is happening is reminiscent of a targeted campaign to discredit the authorities in the eyes of the population.With one single goal: the population will become much more manageable if, instead of politics, they are preoccupied with finding food. Therefore, another major crisis is needed, one of the tools for the creation of which are the characters mentioned above with their irrational decisions. And there are no prerequisites that this plan will not work.

So the resignation of “talking heads” is just a process of replacing one spent figure with another. Boris Johnson will be replaced by an even more odious character, like Elizabeth Truss. And such a rotation will not affect the general vector of foreign policy, the project of Britain in Eurasia and more global things.

One brick at a time the mansions of power will fall, this is a big one, please let Trudeau be next, all of Canada hates his guts.

If his successor is the fool on Ukraine and Russia as this clown still is, he/she will fare no better.

I hope they will debate well for what to do.

The worst is they have no good replacers. I see none.

As for Russia Kiev and the ukras should take over even the corruption will remain in the same level for many years.

They cant go back in time. But for them and others, there should be 2/3 majority for vital changes. Some 51% is instability

he prefers dicks over bananas.

I heard talk before Christmas last year that Johnson was going after the new year 2022 And that he was only prime minister in order to bring in Brexit Don’t forget the whole covid two year lockdowns and the rest.

The stupid turd is gone, now we wait to see the reptilian that’s going to replace him, I suspect it going to be that vile $$$t Elizabeth Truss. With this creature at the helm, I’m sure it wont be long, before we hear the liberation of Wales and Scotland.

No doubt they’ll find someone even worse, probably that dumb bitch Truss.

You are not giving it up, you’ve been fired for doing such piss poor work, you’re a clown!

Bon voyage fat boy. Show in the next clown.

People of Blighty, spoil your votes next election or simply write ‘none of the above’. Those presented to us for election are simply not good enough. All the major parties are corrupted. We, as a country and people will never move on without proper representation. Revolution is the ultimate result of ignoring the people.

Russi govt —“clown will not be missed” senile biden: “can I sniff your hair?”

Certainly one of the most lucrative, I’d love to see what his offshore bank accounts look like……

Why is that buffon pushed out. Did he give too much visibility on UK’s elites hubris, stupidity and contempt for Russia? The chess board is pretty clear now, UK is the sole country pushing to extend the war in Ukraine and to position nuclear capable missiles all along Russia’s border. They didnt listen to Kissinger advice.