This article is originally appeared at the blog “Voice of Sauron” and we believe it’s enoguh reason to read it. 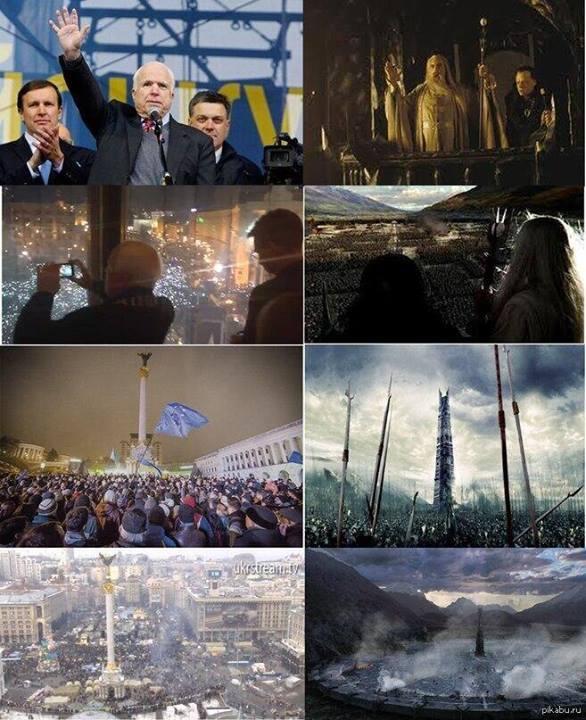 The New York Times has once again shown its declining journalistic standards, which increasingly rely on regurgitation of fake memes and/or official propaganda.
On October 5, 2015, it reported “Kremlin Says Russian ‘Volunteer’ Forces Will Fight in Syria.”  Here is a key expert from the story:
Although President Vladimir V. Putin has ruled out sending ground forces to Syria, a senior Kremlin defense official told Russian news agencies on Monday that military veterans who had fought in eastern Ukraine were likely to start showing up as “volunteer” ground forces in Syria.
The statement by the official, Adm. Vladimir Komoyedov, head of the armed forces committee in Russia’s Parliament, asserted that such volunteers “cannot be stopped.”
Admiral Komoyedov’s statement was the strongest signal yet of Russia’s intentions. It echoed Russia’s use of shadowy ground forces in other conflicts over the past year — most notably its seizure of Crimea from Ukraine in March 2014 and its assistance to insurgents in eastern Ukraine.
Here are the two main problems with this story, moving from least to most significant:
First, Admiral Komoyedov is not a “senior Kremlin defense official.”
The Kremlin is Russia’s executive branch, i.e. the buildings inside the Kremlin walls.  Russia’s parliament is an entirely separate body (one which the Times and its ilk at all other opportunities discount as superfluous and irrelevant.)  We wouldn’t say John McCain is a White House official now, would we?  This shows a serious lack of understanding by the so-called reporters as to what they are writing about.  Nor should the editor have written “Kremlin Says…” in the headline.  The Kremlin has said nothing of the sort.
Second, what is the background to the Admiral’s statement?  The statement originally appeared on Russia’s Interfax.  My translation of the key passage is as follows:
“Probably in the ranks of the Syrian army there will appear units of Russian volunteers, combat veterans”, said Komoyedov to Interfax on Monday, commenting on media reports that volunteers who previously fought in eastern Ukraine have been spotted within the Syria government forces.
OK.  So, what “media” is claiming that Russians fighting in the Donbass have been seen in Syria?
Well, I did an extensive keyword search and here is, quite literally, one of only two ‘original’ sources that I could find on this mater.  (I do not consider Ukrainian Facebook, Twitter, etc., as ‘original’ sources.)
This is some no-name Ukrainian website I’ve never heard of before.  (Keep in mind, it’s actually a Russian-language site, as about 80% of Ukrainian citizens either prefer Russian or do not speak Ukrainian at all.)
The headline translates as: “Fugitive Militant ‘Motorola’ Has Become a Fan of Assad and Intends to Fight in Syria.”
So here is code-name Motorola in his barracks.  (He’s the one on the right.) Yeah, he seems to really like Assad.
But here is the most ‘damning’ piece (again, my translation):
Now the Kremlin is trying with all its might to return the Donbass back into Ukraine as a territory with special rights.  And the fake “government” of the LDNR (Lugansk and Donetsk Peoples’ Republics) is waging a purge against the most ideological and inflexible field commanders.
Thus, Motorola, in all likelihood, could join the Russians so as to continue the war, this time not in the Donbass, but in Syria.
There he will start fighting against the Free Syrian Army rebel group, on the side of Bashar Assad’s government forces.
Got that?  “In all likelihood”, he “could” join the Russians to fight in Syria.
Now keep in mind, this ‘news’ story is as of September 11, 2015.  Here is the other ‘original’ source that I found, from September 12.  This is more of a flimsy, low-budget-looking site; it sort of reminds me of a MySpace page.  (Again, it is a Ukrainian site but written in Russian.)
In the above link, we have the same photo of Motorola as well as the following commentary (again, my translation):
The Donetsk militant Motorola, well-known for his cruelty and dastardliness, probably went off to Syria…
So, as far as I can tell, all claims that Motorola is (‘probably’, ‘in all likelihood’) in Syria originally hearken back to one of these two low-grade sites.  Moreover, I could find no analogous claims with respect to any other Donbass rebel commanders.  It seems the Ukrainians simply decided to pick on Motorola due to his celebrity status (he looks like a heavy metal bassist and was prominent in the defense of Slaviansk and the battle for Donetsk Airport.)
And from these two sites, the claims were passed around on other Ukrainian sites and social media and became a meme.  After all, it makes sense that, having done evil in the Ukraine, Russia would be using the very same demons to wreak havoc in Syria, right?
Well, fast forward two weeks, to September 25.  Some Donbass resident posted a photo on her Facebook page showing Motorola attending an event in the Donbass city of Torez.  Her Facebook page appears to be down now, but her photos of the event were carried on a number of sites both Russian and Ukrainian, including this one, where the headline reads as follows (my translation):
Motorola, who “was sent off” to Syria, was spotted at a tank biathlon in Torez.
And here he is, folks (see second from left): Now, that was a quick mission to Syria, wasn’t it?  Maybe he couldn’t handle the heat and the sand…
So let’s recap:
(1)  A Russian news agency asks a (by all Western accounts) rubber-stamp Russian parliamentarian about totally fake “media reports” of Donbass rebels in Syria.
(2)  The parliamentarian responds that, yeah, sure, probably these types of people will make their way to Syria.  He even jokes (my translation): Our young communist youth volunteers, you know how the song goes, they can’t be stopped.
(3)  The New York Times packages this as “the Kremlin” issuing “the strongest signal yet of Russia’s intentions” on the “use of shadowy ground forces” in Syria, when this guy is not even a Kremlin official.
What’s not to like?
Let me be clear:  It will be a cold day in hell before Russian ground forces (other than small special forces units which you won’t hear about) will be fighting in Syria.
Russia simply does not have the demographics or the public support for that kind of nonsense.  Nor is it necessary, given that the 100 million Shiites in the region can probably get the job done with Russian air support.
I will surely have more to say about the New York Times in the future.  This is not the first bogus Ukrainian meme that has made it into the “gray lady’s” pages, and it won’t be the last.