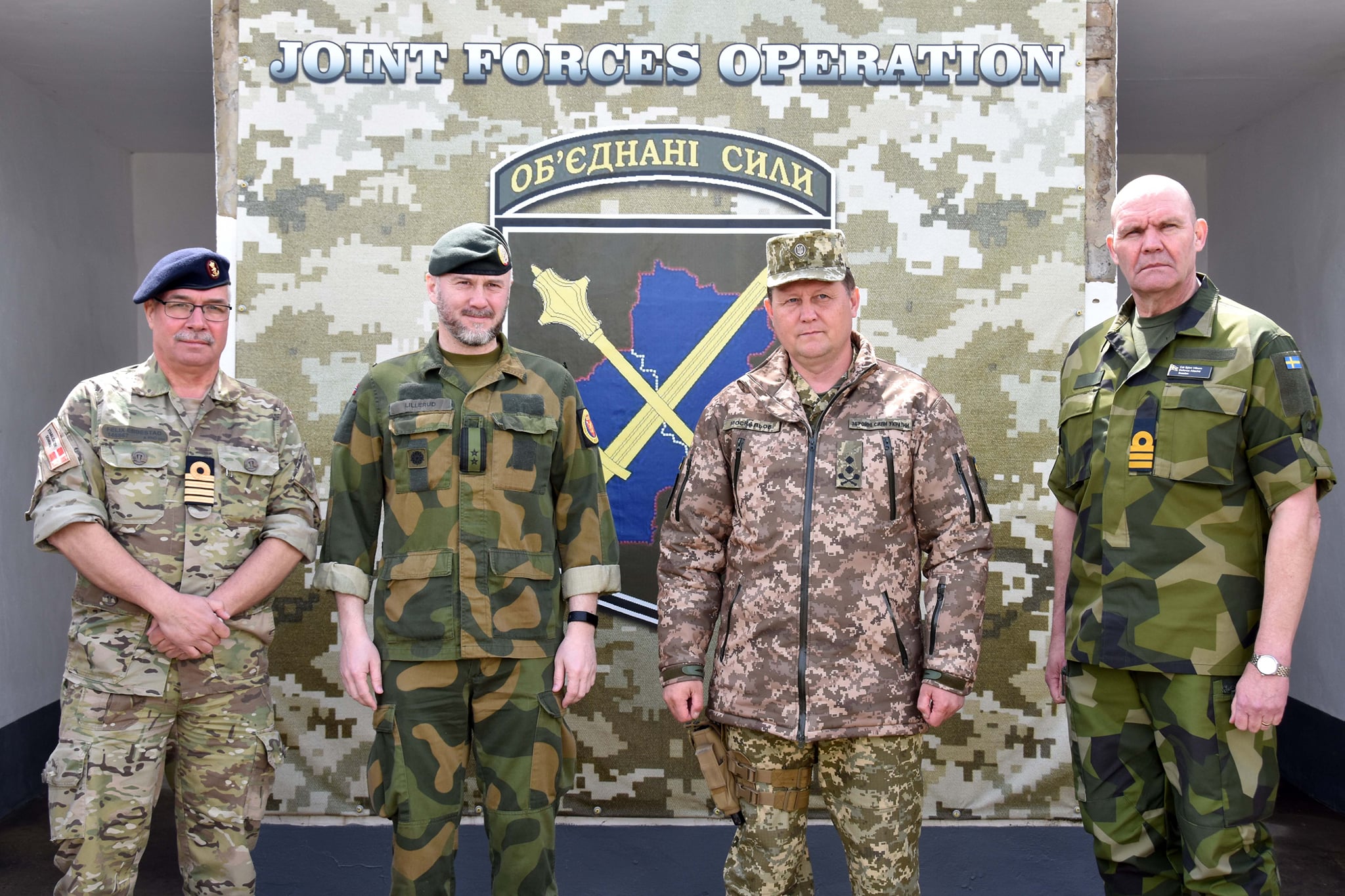 A relative calm took place in Eastern Ukraine on May 9th and 10th.

It wasn’t the result of Kiev’s benevolence, and to respect Victory Day celebrations, but rather to prepare for a working visit of foreign military attachés to the frontline.

Representatives of military-diplomatic missions of foreign countries paid a working visit to the Joint Forces operation on May 11th.

The Deputy Commander of the Joint Forces, Major General Eduard Moskalyov, briefed the members of the foreign delegation on the current security and operational situation in the area of ​​environmental protection.

The head of the Ukrainian side of the Joint Center for Control and Coordination of Ceasefire and Stabilization of the Line of Demarcation of the Parties, Major General Serhiy Salkutsan, informed the audience about the main tasks assigned to the SCCC and the progress of their implementation.

Also, the delegation of military attachés visited the units of the Armed Forces of Ukraine that perform tasks on the line of contact with the enemy and got acquainted with the infrastructure and operation of the checkpoint of entry and exit Zolote.

To show off their questionable efficiency to the attachés, the Ukrainian Armed Forces in Troitskoe and Novgorodskoe shelled DPR forces in the settlement of Krasniy Partizan with the prohibited 120-mm artillery.

As a result, 1 DPR soldier was killed, two were injured.

This was then responded to by the DPR, but the Ukrainian side claimed it had been a violation of the ceasefire in the area.

The facts of violations were promptly brought to the attention of the representatives of the Ukrainian side in the JCCC, in order to take timely measures against ceasefire violators and to exclude cases of falsification of credentials on violations of the ceasefire by Ukrainian militants.

The OSCE SMM in its reports also confirms the aggression of the armed formations of Ukraine.

In particular, the OSCE SMM report dated May 10 reports on damage to several civilian infrastructure of the Donetsk People’s Republic at once, resulting from the use of 122-mm artillery by members of the Ukrainian 15th battalion of the 58th brigade. 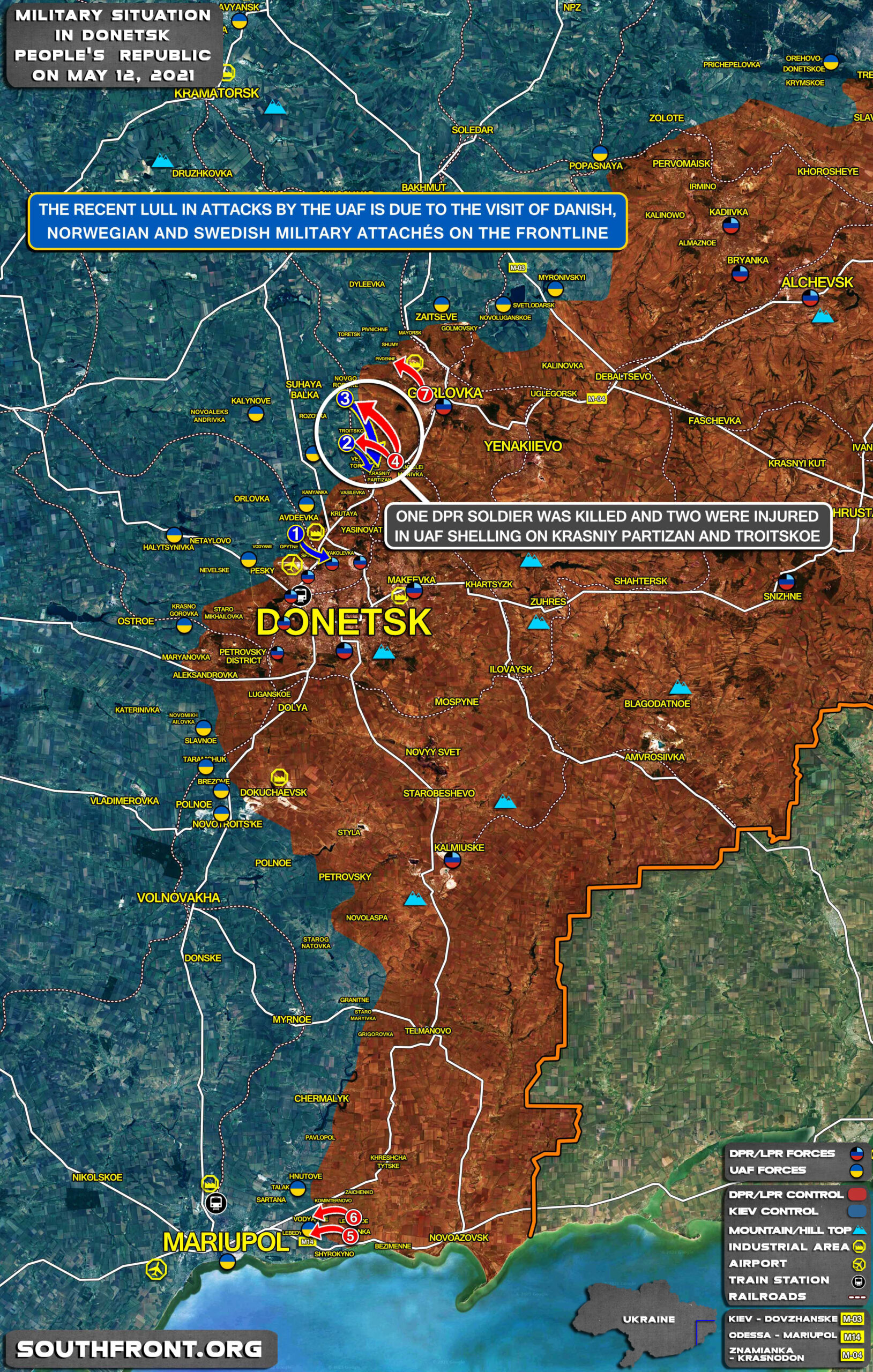 The European asskissers are literally going to lose their entire countries and the centuries it took to build their Societies rather than admit that all this anti-Russian drivel is just propaganda to make money for the Fracking Industry. While the Middle East countries are being dismantled and their populations pushed into Europe DELIBERATELY to overwhelm their governments, they continue to be absolute COWARDS and stand up against this entire DISHONEST narrative. They deserve what they reap by being eunuchs to a handful of corporations who have zero loyalty to anything but money. I have never seen such subordinate lackeys in my lifetime as the cowardly leaders of Western Europe.

“‘Propaganda’ in its proper meaning is a perfectly wholesome word, of honest parentage, and with an honorable history. The fact that it should to-day be carrying a sinister meaning merely shows how much of the child remains in the average adult.” — ‘Propaganda’ by Edward Berneys, Page 22.

[“There is no word in the English language,” it says, “whose meaning has been so sadly distorted as the word ‘propaganda.’ The change took place mainly during the late war when the term took on a decidedly sinister complexion. “If you turn to the Standard Dictionary, you will find that the word was applied to a congregation or society of cardinals for the care and oversight of foreign missions which was instituted at Rome in the year 1627. It was applied also to the College of the Propaganda at Rome that was founded by Pope Urban VIII, for the education of the missionary priests.

Hence, in later years the word came to be applied to any institution or scheme for propagating a doctrine or system.

“Judged by this definition, we can see that in its true sense propaganda is a perfectly legitimate form of human activity. Any society, whether it be social, religious or political, which is possessed of certain beliefs, and sets out to make them known, either by the spoken or written words, is practicing propa¬ ganda.

“Truth is mighty and must prevail, and if any body of men believe that they have discovered a valuable truth, it is not merely their privilege but their duty to disseminate that truth. If they realize, as they quickly must, that this spreading of the truth can be done upon a large scale and effectively only by organized effort, they will make use of the press and the platform as the best means to give it wide circulation.

Propaganda becomes vicious and repre- hensive only when its authors consciously and delib¬ erately disseminate what they know to be lies, or when they aim at effects which they know to be prej¬ udicial to the common good.

‘Propaganda’ in its proper meaning is a perfectly wholesome word, of honest parentage, and with an honorable history. The fact that it should to-day be carrying a sinister meaning merely shows how much of the child remains in the average adult. A group of citizens writes and talks in favor of a certain course of action in some debatable question, believing that it is promoting the best interest of the commu¬ nity. Propaganda? Not a bit of it. Just a plain forceful statement of truth. But let another group of citizens express opposing views, and they are promptly labeled with the sinister name of propa¬ ganda. . .

The extent to which propaganda shapes the prog¬ ress of affairs about us may surprise even well in¬ formed persons. Nevertheless, it is only necessary to look under the surface of the newspaper for a hint as to propaganda’s authority over public opinion. Page one of the New York Times on the day these paragraphs are written contains eight important news stories. Four of them, or one-half, are propaganda. The casual reader accepts them as accounts of spon¬ taneous happenings. But are they?]