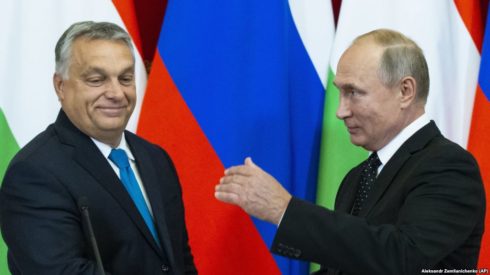 On September 17th, Hungary reached an agreement with Russia on gas deliveries for both 2019 and 2020. The announcement was made by Prime Minister Viktor Orbán during a joint press conference with Russian President Vladimir Putin, as reported by Hungarian news agency MTI.

Budapest Business Journal cited Orban as saying he had asked President Putin to seriously consider extending the path of the TurkStream (Turkish Stream) natural gas pipeline into his country and further into Europe. TurkStream, which replaced the cancelled South Stream project, is currently under construction, extending from Russia across the Black Sea to Turkey.

“It is no secret that when the pipeline will be built in the direction of Hungary from the south, we would like it to pass through Hungary. That will be a great opportunity for Hungary and I asked Mr. President [Putin] to seriously consider such an option,” the Hungarian Prime Minister said.

“I do not rule out that after the completion of the Turkish Stream, one of its land extensions could pass through Hungary,” Putin said, as cited by RT.

Minister of Foreign Affairs and Trade Peter Szijjarto confirmed earlier Tuesday that Russiaʼs Gazprom had agreed to start talks with Hungary on gas deliveries for 2020. Hungary plans to buy about 4.1 billion cubic meters of gas from Gazprom, he added.

MTI noted that Szijjártó was scheduled to meet on September 24th with Alexey Miller, Chairman of the Management Committee of Gazprom, a day ahead of the official visit by Orban.

Hungaryʼs long-term contract for gas deliveries from Russia runs until 2021. Szijjarto acknowledged that much of Hungaryʼs energy supply comes from Russia.

“We are not in the position, as are others an ocean away, to say we donʼt have to talk with the Russians,” he commented.

He also added that talks on boosting Hungaryʼs role in the Moscow-based International Investment Bank (IIB) are at an advanced stage. The IIB is involved in Hungarian projects worth about EUR70 million at present, he noted.

Commenting on the cooperation between the countries, Putin noted that Budapest was always a reliable partner and announced that Rosatom would soon start the construction of two power units of the Paks-2 nuclear power plant (NPP).

“There are good opportunities for the development of Russian-Hungarian cooperation in the field of nuclear energy. Rosatom will soon start building two new power units at Paks NPP, by the way, this nuclear power plant already produces 40 percent of electricity consumed in Hungary,” he said

Putin also said that Russia and Hungary are establishing a new intergovernmental commission for regional cooperation.

“In line with our initiative, an intergovernmental commission for regional cooperation is being set up, and its first meeting will be held before the end of this year,” the Russian President announced.

Orban and Putin have focused on the economy and energy at their meeting, according to Peter Szijjarto. In July, Russian President Vladimir Putin said the Russian-Hungarian trade had grown by 25 percent in the first quarter of 2018.

The Kremlin press service earlier said that the two leaders would discuss topical bilateral issues as well as international ones.

Earlier, Hungarian foreign minister Peter Szijjarto stated that the two countries had agreed on the quantity and price of gas to be delivered to Hungary in 2019.

In June, the Bulgaran Prime Minister Boyko Borissov asked Russia to extend the Turkish Stream to his country. Russia’s Gazprom is planning to extend the pipeline to Bulgaria, Hungary and Serbia.

The US is a strong opponent of TurkStream in addition to NordStream 2. Donald Trump has voiced his concerns numerous times regarding the dependence of the European Union on Russian energy.

Donald Trump are welcomed to replace the Russian gas with same price and same delivery time with it if they want the market. Why would the European pay more for much slower delivery of USA gas ? Well other than the reason being they’re extorted.

Tudor Miron
Reply to  as

May be because it is Kosher Democratic American gas?

I had some Kosher gas, it smelled really bad!

thanks for the laugh.

So tense lately we all need a laugh.

you are a scumback loser

Rather that then whatever the fuck it is you think you are. It’s scum bag by the way.

This system of creating dollars out of thin air backed strictly with military arrogance paid for by that same thin air is limited.

The world grows weary of being held at the point of a gun and looks for reliable partners that don’t throw them under a bus for wanting a better deal.

as
Reply to  frankly

Not actually thin air. The foreign government that holding their bonds at least would want their money back with interest. It’s paid by their citizens future. Like the Russian citizens paying up it’s USSR debt.

So will China be getting payments when the US is at war with them? It’s a fiat currency. A promissory note.

Russia and China threaten to establish gold back currency, which was also Khaddaffi’s big sin.

No wonder the panic to get WW III underway! Go look at the US debt clock and tell me they can keep going!

Nice, gold-backed currency. What is next? Coal instead of oil? Lumber to gas?

Well it has some value. It was all taken from the Ukraine and Libya, job #1. Would you prefer your pension in gold or silver coins or crypto currency Mr. Modern?

Russian citizens wont see any benefit, russian monarchy will. At this point I may sound like a bloody communist, but russian taxpayers will fund construction of gazmagistral.

If you are not educated enough, let me put this simple and straight: Russian goverment rob russian nation again. What a corrupt rabbit hole.

Tyranny prevails in both Russia and Hungary, thus, hungarian gov will find a way to rob hungarians too.

Well perhaps, but where is the Utopia where the oligarch don’t demand their chunk right off the top?

Don’t forget that hungarian is just 1.3% of the European population, it’s really big deal that Hungary has even been mentioned on this site. :)

With the US it’s always sanctions, tariff, or threats of war.

George Soros, a US billionaire who became one of the world’s wealthiest people by managing hedge funds and betting on currency fluctuations, has meddled in European elections many times. The last Italian election is one example. His Open Society Foundations spend $940 million a year in 100 countries in pursuit of political goals. He has been asked to leave Russia and Hungary, the country of his birth, for interfering in politics. The “Soros network” has great influence in the European Parliament and in other European Union institutions. It’s an open secret that the billionaire is a vehicle used by the US State Department to meddle in other countries’ internal affairs. USAID and the Soros network often team up. Last year, six US senators signed a letter asking the State Department to look into government funding of Soros-backed organizations, but to no avail. The State Department always protects the financier.

Thanks Viktor Orban! Russia and Hungary could be great partners!

The headline is a bit misleading, Hungary doesn’t have a beef with Ukraine. What they do have is an urge to get ahold of cheep gas no matter what’s going on in the Donbas, so they’ll tap into the Turkish pipe until the Ukraine and Russia can slowly (if ever) work something out for a pipeline there.

Hungary doesn’t have a beef with Ukraine

This is big bullshit! Hungary would lose lot of money.

You apparently don’t know much about anything. The reason the EU courted Ukraine was that 85% of it’s energy flowed from Russia, through Ukraine. Ukraine tacked on 17% tariff, which Russia passed on thru to the costumer. If Ukraine was an EU member that tariff would be limited to 2.2%. The possible loss of revenue for Ukraine was one of the many reasons that their people elected a pro-Russian government by over 84% of the vote to stay out of the EU. That vote was the last free election in Ukraine, certified by the UN and the US State Department as a fair election. It didn’t matter as the CIA and USAISA over threw the elected government. The West loves Democracy, except when people vote for things the West doesn’t want, then its intervention time. Drop the Ukrainian 17%, let Turkey, Bulgaria and Hungary add 2% each and the EU gets a better deal, Hungarygets a big revenue stream, and the Nazis in Ukraineget let out in the cold. Remember next time you hear how broke Russia is, that they currently make $85 million dollars/hour profit from Energy sales to the EU (it will spike to $115-$120 million/hour in Winter depending on demand). No wonder Trump wants a piece of that action for the US. The West has changed too overtly Liberal where all things are acceptable, they aren’t. Europeans, especially Eastern Europeans, see Russia as their only hope for saving their Christian European Values, Traditions and Institutions from EU/Soros mandated population replacement by the hoardes of African and Asian Muslims currently running amok in the West.

Huh? 96% of citizens voted for EU membership. Tariffs would not change. Where did you take this info? 84%? Are these numbers from a random website? Russians faked elections in 2008 and 2012. Nazis in Ukraine? Recently ukrainian parliament passed a vote to ban nazi and commie ideology. And they succeeded. Now both commie/russia supporters/neo nazi are beaten on the street by patriots and ultra right nationalists. You can google a lot of video on youtube.

Just make sure you filter out RT and russian media. 17% tariff? Jesus, russian set politics stole all of these money. And now, these politics fled to Russia, when ukrainian-polish patriots overthrew the russian gov in Ukraine.

Do you read russian press only? Try ukrainian, polish, lithuanian or british. Hell, even french will go.

again: the pipelines from ukraina goes through hunbgary. if this pipeline will be not used, hungary lose large amount of money for tranzit.

hungary was ALWAYS against nordstream2

Wont change anything in general. Russian citizens will pay for it with no revenue later. I wish I were a member of russian duma. I mean – it is so fun to steal from your nation, right? Sad that with the richest country in the world, simple russian teacher cant even afford 20 years old car :( Thanks Obama and Trump :(

[I am trolling, it is not amercia’s fault that russian gov is full of thieves]