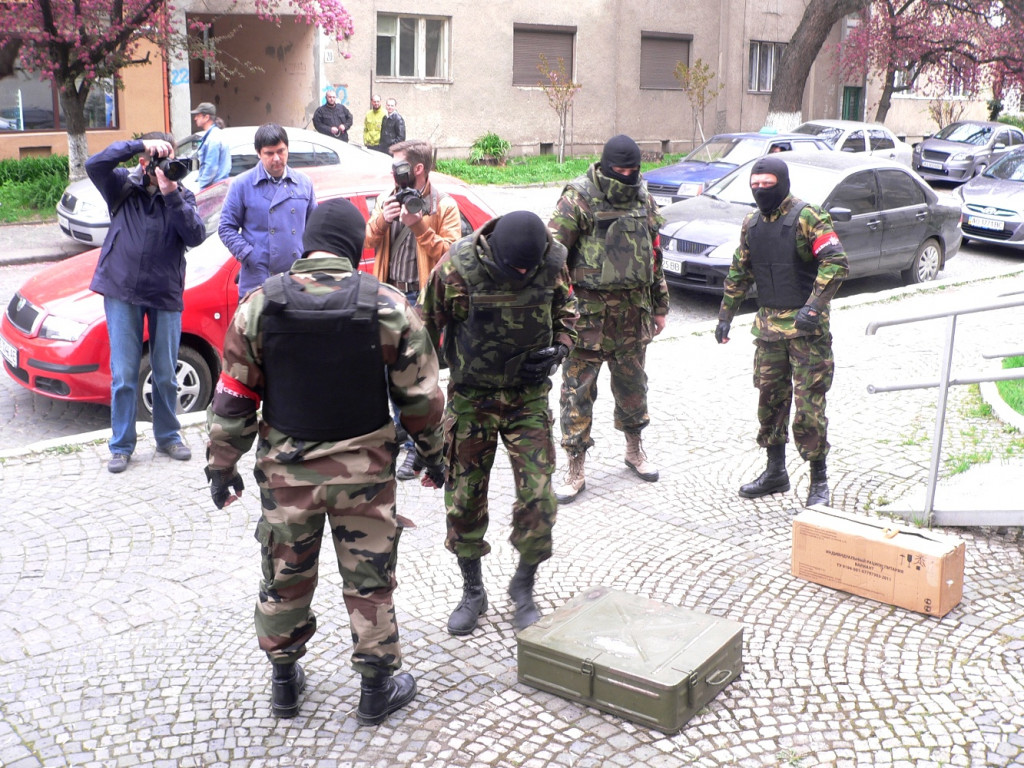 This article originally appeared at Nakanune.ru, translated from Russian by Carpatho-Russian

Events in recent days indicate that in Ukraine a real chain reaction has taken place, driven by external agents for more than a year. The Ukrainian regions following [the example of] Lugansk and Donetsk are beginning to take sovereignty, and the remnants of the administrative elite, the junta, every possible paramilitary group, and “Right Sector” have been interwoven in a deadly fight for control over resources, financial streams, and territories.

We have already gotten used to perceiving Ukraine as something common, a country where there is a “Russians – Ukrainians” problems. But we do not at all consider numerous ethnic groups who somewhat separately and compactly live in localized areas and regions. So it is possible to note with confidence that there are conflicts “Hungarians – Ukrainians”, “Poles – Ukrainians”, “Rusins – Ukrainians” and some others.

For example, in Ukrainian Trans-Carpathia there is a considerable community of ethnic Hungarians: about 150,000 people, more than 100,000 of whom already have Hungarian citizenship. However, in Ukraine dual citizenship is forbidden. 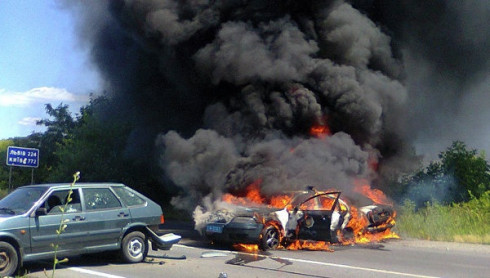 Considering the proximity of the boundaries with Hungary, as well as the expanding military conflict in Trans-Carpathia with the active participation of Nazis from “Right Sector”, the Hungarian government can fully gain carte blanche from the European Union for the necessary protection of its own citizens and, the main thing, Hungarian boundaries.

The unstable situation on the territory of Ukraine, reminiscent today of the situation in some countries of the African continent with their permanent civil war, saturation of society with weaponry, and weakness of law enforcement agencies and security forces, are quite capable of requiring neighboring states to take adequate measures to prevent the threat of an armed conflict creeping into the territory of Europe.

First of all, this concerns Hungary, Poland and Romania.

Trans-Carpathia is mountains, and in the mountainous and mountain-forest terrain fighters of “Right Sector” and other neo-Nazi formations can have not only caches and bases, but also to adjust the routes for transportation of armament, narcotics, and materials for illegal transportation to the European countries.

The most recent events in Mukachevo, allegedly linked with re-distribution of streams of contraband cigarettes to Europe, induced Budapest to make official statements on this subject.

In an interview with the Hungarian business newspaper “Napi Gazdas” the head of the office of the prime minister of Hungary Janos Lazar unequivocally declared that the government of Hungary is “seriously anxious with the shooting on streets in Mukačevo” and intends to protect Hungarians living in Ukraine. It is not by chance that in Trans-Carpathia there are two flags on the buildings of many agencies — Ukrainian and Hungarian. Lazar also declared that “if they do harm to Hungarians in Trans-Carpathia and they are forced to flee, we will assist all and accept all”.

According to him, the Hungarian government is ready for “the worst-case scenario” for development of Ukrainian events: “According to some analysts, Ukraine is drifting to the egde of a crash, and this process strengthens the aspirations for autonomy”. In fact, official Budapest is already interfering with the internal affairs of Ukraine: Janos Lazar verified the introduction by the government of Hungary of new programs to help ethnic Hungarians of Trans-Carpathia.

Budapest will finance extra wages for teachers and feeding school students, and will also “render assistance to governing bodies”. The indicative fact was that by means of a powerful network of agents of influence, Hungary has brought it about that Hungarian youth from Trans-Carpathia are not subject(!) to call-up to the Ukrainian armed forces. The Hungarian newspaper “The Budapest Beacon”, referring to the same Lazar, notes that “Hungarian agents protecting the interests of Budapest” are working in Ukraine.

As a result, the most sensible part of the Ukrainian experts considers that Hungary can take Trans-Carpathia if destabilization of the situation and armed conflicts proceed in the region.

“If theoretically Ukraine, instead of establishing order, follows another scenario of similar clashes in other cities, then of course, the Hungarian minority will bring up the question before Europe, saying “can you take away us from Ukraine?” — suggested the expert from the Institute of Political Formation Alexander Solontay in an interview with outlet Glavcom.ua. — “People will say: Annex us, think it through and do something, but we do not want to be involved in this”.

There are similar problems also with the Rusin population of Trans-Carpathia. The chairman of interregional public organization “Union of Rusins” Andrey Fatula considers that “the authorities in Kiev are afraid of the activity of the Rusins and consequently farmed out the region to “Right Sector”. He reminds that in Sub-Carpathian Rus’ (now Trans-Carpathia), Rusins comprise the basic population, number more than 700,000 people, and since 1991 have been demanding restoration of autonomy. Thus, one more “hotspot” of the size of the whole region is noted.

Prime minister of the unrecognized Republic of Sub-Carpathian Rus’, coordinator of the Rusin movement network Peter Getsko announced: “They will take care of the European boundaries so as not to allow export of violence to Europe. And Hungary is supported in this by Germany. The potential for war in Europe will be high in 2016, but not in Hungary and Slovakia, and in Poland, – noted Petro Getsko. — “Right Sector” has left the command of those who created it. We, Rusins, are ready to work with all except for Banderovites”. He added that “special forces of Hungary are already in Trans-Carpathia”.

If we consider the conflict of “Right Sector” taking place with the relatively lawful representatives of the current Ukrainian authorities, the picture gives the firm impression: it is very probable that Washington is plotting the next revolution in Ukraine, and again with participation of the RightSectorites, who until now are afraid for some reason to show their faces to the people for whom they are allegedly acting.

But it is possible to expect anything convenient from them, including an attack on Russia. It seems that official Kiev cannot and does not want to control “Right Sector”. This organization not only is forbidden in Russia, but is also recognized there as terrorist, whereas it possesses in Ukraine a rather significant force of the type “thugs with weapons”.

Their official leader Dmitry Yarosh is legalized, and possesses immunity as a deputy in the Rada. He declared that “it is necessary to speak already about the resignation of the President”. However even his many “RightSectorites” consider him as “not Nazi enough”, while opposing the “Poroshenko regime”.

In this plan the statement of the head of the Trans-Carpathian Oblast of Ukraine is indicative: according to him, “80 % of the supporters of “Right Sector” have three or four criminal judgments each”. The question arises: are they not in general criminals?

Judging by the “Marlezon ballet [farce]”, instead of a counter-terrorist operation in Mukachevo, self-designated president Poroshenko obviously has a strong collar and leash which is yanked by the State Department to keep him from touching “Right Sector”. And it is the truth that for fighters of the latter group, the “revolution on the Maidan is not complete”.

Hence, Poroshenko is used by the US State Department to create the conditions which will very probably lead to the emergence, in addition to Donbass. of flashpoints on the borders with Transdnistria, in Prikarpatska Rus’ and even, possibly, in Galicia.

After all the USA does not need order in the region, but exactly the contrary — that this be the global trouble spot in the neighborhood with Russia and the EU. The American financial system can stay afloat now only under conditions of essential destabilization in world politics.

The ideal method for this purpose is the next revolution in Ukraine, and the tool will be the UkroNazis. Here, a change in government is not even required, since anarchy, regional separatism, and so on, will completely settle this — the more disorganization, the longer the timeframe, and the more appealing to Washington.

It is perfectly clear that Hungary has already begun to realize the future danger from the Ukrainian neo-Nazis. And here in Poland everything for the time being is restricted to languid public protests and indistinct statements of politicians. One time, the Poles counted upon the help of the West, but instead gained Hitlerite occupation together with the horrors of the Volyn slaughter. It seems that now is the time for our government to stop following submissively the lead of Washington policy and to reflect, at last, on its own citizens living both in Poland and in Ukraine. Otherwise it will be too late.