Opposition activists said that units of the terrorist group’s security forces stormed al-Ashda’s hideout in the area of Rif al-Muhandiseen in the western Aleppo countryside in the late hours of the day. The former commander was reportedly assaulted and insulted during the arrest.

Al-Ashda released a video message three days ago exposing the corruption of HTS leadership and their obsession with power. The former commander also revealed that the group had ignored warnings of a nearing Syrian military attack in the northern Hama countryside earlier this year.

According to many sources, al-Ashda was the general commander of HTS’ Umar ibn al-Khattab Army. The commander led several operations against the Syrian Arab Army (SAA) and even other opposition groups over the last two years. 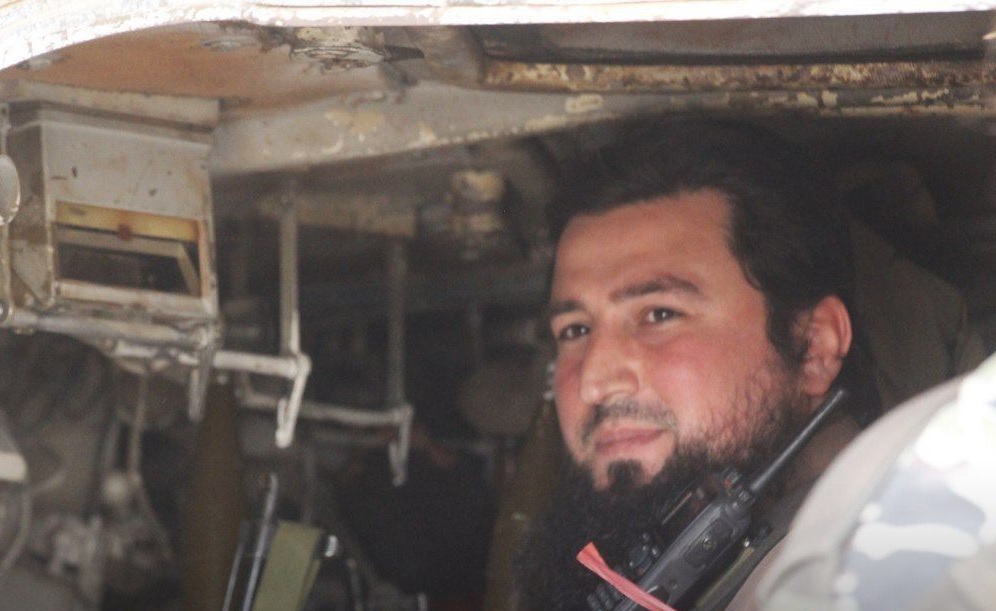 Despite his services, HTS publicly announced a few days ago that its security forces are working to arrest al-Ashda in order to present him to a military court. The group had also arrested a media man for sharing al-Ashda’s message.

By arrested al-Ashda, HTS is sending a strong message to all of its members and civilians in Greater Idlib that it will not tolerate any criticism. This shows how the group solidified its influence in the region over the last two years.

Not just Al Qaeda that will not tolerate criticism.

Over in the House of Lords, why are they fuming, when one of the members asks about the European Defence Forces, which the UK will be part of, whether in or out of the EU, thanks to May.

All our Forces, will have to swear an oath to serve Brussels, together with all our weapons and systems, will be handed over to Brussels. Only, we are not meant to know, for some reason. It upsets Tony Blair, his good mate, and friend of Thomas Hamilton, who took out the school kids in Dunblane, together with another one of Blair’s good old Labour mates. Why are they threatening the Lord, with the police, owing to him mentioning what was in the public domain, but, never presented to the people of the UK?

What happened in the aftermath of World War II has been one of the darkest and best kept secrets in world history.

How President Ahmadinejad’s words were mistranslated and deliberately distorted. So that the term “wiped off the map” has now become synonymous with the Iranian leader’s attitude to Israel – even though he never uttered those words

Fake Terrorism: The Road to Dictatorship By wmw_admin on October 10, 2008

Throughout history “terrorist” acts have been carefully staged and used to further the power of the ruling elite. In the light of the latest “terror” plot we repost an old favourite as a reminder

CEO of MGM Grand – Which OWNS Mandalay Bay Casino Hotel Where Shooting Took Place – SOLD-OFF HIS MGM STOCK in the weeks before the attack! By wmw_admin on October 9, 2017

Did he have prior knowledge of the attack and got rid of the stocks before the price plummeted?

Photo surfaces of ‘The Craft’ mobile communications van at Boston marathon By Mike Adams on April 19, 2013

Doug Yurchey looks at the history of Hemp and the real reason why it is now illegal. As with so many other things, we’ve been sold a lie to maximise the profits of a few

Category: Behind The “News”, Essential Reading

David Cole at Auschwitz By wmw_admin on October 7, 2006

Now directly linked, a must see video. Watch as a young Jew demolishes the standard notion of the Holocaust, highlighting its contradictions and flaws with logic and clarity. An hour long video of absolutely essential viewing

Scallywag Magazine article on Lord McAlpine and Derek Laud By wmw_admin on November 15, 2012

Affidavit of Richard Tomlinson By wmw_admin on February 14, 2008

“I firmly believe that there exist documents held by the British Secret Intelligence Service (MI6) that would yield important new evidence into the cause and circumstances leading to the death of the Princess of Wales.”

‘Hero of Brexit’ Lord James of Blackheath Threatened over EU Defence Union By wmw_admin on September 11, 2019

Thanks Florian to pointing me to The Truth Seeker.

EXPLOSIVE SLOG SPECIAL: HOW MAY WAS INSTALLED, HOW SHE HID DEFENCE TIES TO THE EU, HOW THE MEDIA LIED ABOUT THE OCTOBER BREXTENSION… https://hat4uk.wordpress.com/2019/04/15/explosive-slog-special-how-may-was-installed-how-she-hid-defence-ties-to-the-eu-how-the-media-lied-about-the-october-brextension/

We and others like us have realised this from day 1, AM.

Will the country erupt in anger or disinterest ?

I suppose the economics at grass roots level will dictate that, and Javid’s spending splurge on infrastructure will ensure enough free cash for boozy nights out and junk food.

Must admit I am curious. Near where I used to live, they have sold the MoD establishments, to build housing estates, when the Navy eventually moves over to Brussels, yet, we are not meant to know, despite a public meeting being held.

What disgusts me, is the fact that the nuclear deterrent will be handed over and ironically, won’t it be Germany in charge of the European Defence Forces? Remember old Catherine Ashton, she who used to be the treasurer of the CND, who was the partner of the leader of the UK Communist Party, around the time she was at Greenham Common. Good friend of Blair who went onto become the EU Foreign Affairs person, together with the title of the first Head of the European Defence Agency. She got so excited when the Gas Princess was released from prison, over in Ukraine, during The Maidan.

Remember her ‘Gosh’ telephone call, with the Estonian Foreign Secretary, when he mentioned who the snipers were, according to the Doctor witness?

Anyway, going back to my curiousity, how will the Royal Family accept it? Or is that why Merkle was sent to Harry? To prepare for the Republic? There will be no swearing to serve the Queen and Country, but, Brussels and morons.

Will Boris pull us out of it, if he gets his ‘No Deal’, as it would not be able to go ahead, with no agreements, passed through Parliament, would it? Or if he leaves with a deal, will it mean he has given up the first priority of Government, the national security and defence of the nation? Would it have the backing of the Queen?

I find it easier to ‘get my head round’ the various ‘accepted’ political parties and affiliated individuals from commerce , if I consider them all as a well matched melange of ideas with the same goal of universal dominance.

Evidence of such a melange is there for all of us to see in history and real time, when many of those in the mix have been, and are today, rewarded with honours and well paid titular posts.

The current project for a One World Government is by necessity , incremental, and I will likely be long gone before it’s conclusion.

However, when we have the evidence in real time as to the speed a nation can unwillingly be thrust into chaos and destruction by the external political and cultural manipulation of Identity Politics, the UK is firmly in the ‘At Risk’ zone if we do manage to leave the EU.

The Royals will do whatever they need to do to preserve their privilege’s, as they always have tried to do.

Life would be so much simpler, if we just got rid of all politicians, who believe they represent us.

The West’s “human rights” imperialists call al-Queda-occupied Idlib, “Free Idlib”. Yet anyone in Idlib who dares to criticize their al-Queda overlords — even dissident al-Queda members themselves — gets tortured and beheaded. This is the “freedom and democracy” that the Neocons want to bring to Syria.

They want to bring that to the EU as well.

“…The former commander was reportedly assaulted and insulted during the arrest.

You nasty head-chopper bastards… there is absolutely no need to go around INSULTING people. What the hell are you thinking?

And an odd coincidence – that U.S. strike June 30th that supposedly killed eight commanders of Hurras al-Din was in the same place: Rif al-Muhandiseen. Not sure about the US strike Aug. 31st, but that was also reported in the same area and supposedly killed Hurras al-Din commanders. Then this tweet comes out today. WTF, CENTCOM? How many ‘leaders’ does this outfit have, or do you keep missing them during these airstrikes? Something’s fishy as hell, here… https://twitter.com/StateDeptCT/status/1172152884751978507

Here ya go, US State Department. The three leaders are at their Tel Aviv headquarters (pictured) awaiting their next assignment. Please forward my $5 million to Hezbollah – they’re the only ones that are able to take care of these al Qaeda bastards. https://uploads.disquscdn.com/images/6306ede2c07cbc225342236483a547a27d6f640550e40e8196a3db9217d11c2d.png

Some of the smaller militias only have a few dozen fighters but always have a leader, then when a whole bunch of smaller militias join together they become a faction with a multitude of commanders, and then when that faction joins another similar faction, they end up with an army that’s got too many chiefs and not enough indians.

Havent they been fighting in Hama and Aleppo for centuries now?

Not for as long as the US Congress ,Tommy :)

The Jihadist rats now have a major problem. Their mob bosses are stealing the money and morale of the fighters is going to shit. Many did not even bother to show in N Hama last month, and most took off like rats. Next SAA offensive very soon. :)

Seriously, these Americunt and Turkey terrorists are the lowest scum on earth. They need to be obliterated.

Or sent to the EU.

Many are already in Greece :)

When and if the next phase of jihadi bombs explode in the EU, the cry will be from the populace :- ‘ WHY US, WE ARE DEMOCRATIC ‘.

A cynic might then say :- ‘ First they came for the Syrians, Your governments abandoned their terrorist mercenaries, and now they come for YOU’ .