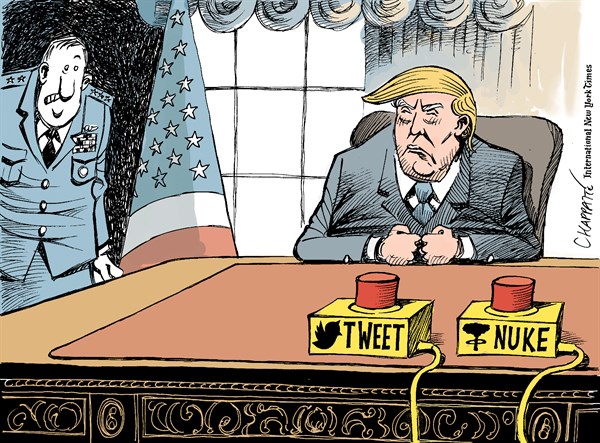 Speaking from the Oval Office ahead of signing the order, Trump said the move was to “defend free speech from one of the gravest dangers it has faced in American history.”

“A small handful of social media monopolies controls a vast portion of all public and private communications in the United States,” he claimed. “They’ve had unchecked power to censor, restrict, edit, shape, hide, alter, virtually any form of communication between private citizens and large public audiences.”

As CNN reports, the order marks a dramatic escalation by Trump in his war with tech companies as they struggle with the growing problem of misinformation on social media. The President has regularly accused sites of censoring conservative speech.

On Thursday, Trump acknowledged that legal challenges to the order are on the horizon, saying he was “sure they’ll be doing a lawsuit.”

“Trump and conservatives have long complained that tech platforms algorithmically censor right-wing voices. The claims derive from a perception that Silicon Valley’s largely left-leaning workforce has designed social media products to discriminate against conservatives, though the companies strongly deny the allegations.

Last year, the White House set up a website to solicit complaints from the public about tech companies’ perceived political bias, and Trump has called for an examination of NBC’s television license. “The Radical Left is in total command & control of Facebook, Instagram, Twitter and Google.”

Tech companies are pushing back on the order.

According to the executive order, the Commerce Department would ask the Federal Communications Commission for new regulations clarifying when a company’s conduct might violate the good faith provisions of Section 230, potentially making it easier for tech companies to be sued.

The order instructs the Justice Department to consult with state attorneys general on allegations of anti-conservative bias. It bans federal agencies from advertising on platforms that have allegedly violated Section 230’s good-faith principles.

So, who are some of these social media companies and tech companies exactly that control and manage such a large proportion of the world’s most-used social media platforms? Google, Facebook, Twitter and Instagram are singled out for mention.

While the largest individual shareholders and senior executives receive almost all the attention (as with many of the other companies mentioned here), the largest institutional investors of Twitter, Inc. are Vanguard Group (10.6%), Blackrock (7%), Morgan Stanley (6.1%) and State Street Corporation (4.5%), between them around 28% (directly). They are also among the largest mutual fund holders through a range of investment vehicles. Vanguard, Blackrock and State Street are also among the 5 largest shareholders of Morgan Stanley.

Facebook acquired the WhatsApp messaging and calling platform in 2014. It acquired Instagram in 2012, and has purchased a variety of other technology and data collection companies with capabilities with many diverse capabilities such as face recognition technology. The largest institutional investors of Facebook are Vanguard (7.4%), Capital R&M (6.9%), Fidelity M&R (5%), State Street (4%) and Blackrock (2.4%) – between them around 28.7%.

And who owns CNN, for that matter, one of the bastions of the fourth estate and the ‘free press’? Apparently, through one or two degrees of separation AT&T is the parent company (via Time Warner). So who are the largest shareholders of AT&T? Vanguard (7.8%), Capital R&M (4.8%), State Street (4%) and Blackrock is 6th with (2.4%) – between them around 19%.

The same financial/ investment fund monsters have large stakes if not between them a controlling interest in many of the most influential mass media companies, weapons producers, among many, many other key economic, industrial and technology sectors.

A more detailed of the multi-layered, interlocked financial pyramid of ownership and control is available at: https://southfront.org/the-pinnacle-of-the-pyramid-of-wealth-and-power-the-buck-stops-here/

The new executive order raises the need to reconsider the regulation of social media platforms. Beyond this is the challenge of seeking to ensure diversity, freedom of choice and real alternatives among social media platforms, as well as deciding who should have the power to censor or control their use, and according to what principles and objectives. What happened to freedom of speech, freedom of association, freedom of the press, etc.?

Going a step further, how the hell have such a small number of relatively recently established investment funds and financial conglomerates managed to obtain control over such a staggering share of most of the major companies involved, as well as just about everything else?

I agree with Trump on this one.

Trump is a bitch, and this EO will not accomplish anything except making his supporters think he’s doing something.

You complain about social media censorship yet when Trump goes after them you ridicule him? I’m assuming you get money from whine the pooh or something