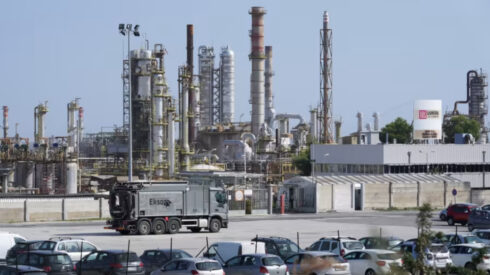 If someone had in mind to write a manual on how to manipulate public opinion, he would have to tell the story of the Priolo petrochemical plant, south of Sicily. It is the fifth refinery in Europe and supplies 25 percent of Italy’s needs.

Those plants were built between the end of the sixties and the following decade. They have passed from ownership to ownership, also due to corruption scandals that involved the management of the plant many years ago. Since 2008, at the entrance to the plant there is the sign with the stylized “L” of Lukoil. The arrival of the Russian company was hailed at the time as the beginning of a new era of prosperity for the industrial sector. In a land like Sicily which boasts the European unemployment record, Lukoil’s rubles were the best “gasoline” to support the economy of one of the poorest areas of already poor Italy.

Since the beginning of the conflict between Russia and Ukraine, the Lukoil plant has come under the scrutiny of politics and the world of information. Of course, US pressure to sanction that industry too was felt strongly. Sicily is a strategic military platform for NATO and US military forces. Even needless to mention it. The Russian presence a few kilometers from naval and air bases had to be compressed and possibly cancelled.

Until 5 December, the oil refined in Sicily by Lukoil was exempt from any embargo. Because, precisely because of the processing done in Sicily, that crude oil from Russia magically became “made in Italy”. It is the global world.

The Wall Street Journal took care of unleashing the spark. The New York stock exchange newspaper branded the Lukoil plant in Priolo as the great “device” created by Russia to circumvent the sanctions on petroleum products.

In the reconstruction of the WSJ it was explained that the American sanctions provide for an exclusion for crude oil “substantially transformed into a product made abroad”, adding that once transformed in the Priolo refinery, Russian oil becomes an “Italian product” and is introduced into the plants of Exxon in Texas or in New Jersey in those of Lukoil, which in the USA has 230 service stations in 11 states (but mostly owned by individual American franchises). Before the sanctions, the Priolo refinery processed crude oil from various countries.

The news slammed into the front page causes chaos to explode. Without Russian oil, the plant closes, the media write, without ever contacting the company’s management. The banks are refusing to give credit to the Sicily-based company. A stop at the Priolo plant would be a catastrophe for the Sicilian economy. Thus, the unions took to the streets to defend the tens of thousands of jobs guaranteed by Lukoil. We ask for the intervention of the Italian government, we ask for a solution.

And in the end the far-right government makes a decision. For the next six months, the Lukoil plant will be administered by the Italian state. It is a mechanism called “golden share” that allows it.

They all breathed a sigh of relief. Politicians who have shown their toughness against everything Russian, trade unions and workers who are no longer conditioned by the specter of “Putin’s war”.

Nino Amadore, a journalist from Sole24ore, is not satisfied with the official version. He thinks it’s worth hearing about Russian ownership as well.

Furthermore, Maniakhine explains that he is in a position to go ahead without problems: “Isab is an efficient and successful company but this was not an easy result to obtain. It’s no secret that the refinery has been loss making for years and needed significant investment. Lukoil bought the refinery in 2008 and we have made total investments since then of around six billion for the purchase, for development projects and for maintaining processing capacity. Six billion invested in the Italian economy. We have improved the structure, the product quality of the refinery and increased the industrial safety and improved the environmental impact of the company. I would like to underline that we have developed the plant continuously, taking into account all the trends and challenges of the sector, including the climate agenda”.

Maniakhine contests the Italian government’s decision to “appropriate” the plant. “We do not consider it fair or useful. This decision could contribute to the closure of the plant and create obstacles for the sale to the new owner”. In short, dear Italians, we have invested in your territory and if this is your sense of gratitude, goodbye, Do svidaniya.

esther must contact out from among the enemy and bring their destruction..

The West has lost its mind. Its not very intelligent “elites”, obsessed with world domination (unattainable since they are not capable of any greatness, but only of meanness), they insist on harming their own Peoples, ruining them in every sense. These wicked beasts must die.

… “they insist on harming their own Peoples, ruining them in every sense. These wicked beasts must die.”…

It started with THIS https://wikispooks.com/wiki/9-11

And the only ones at this point that should be blamed for this are the American “citizenry” that is” that had an obligation to investigate it and protect and defend themselves from the Treason of their own government after “3 buildings 2 planes’ in 2001 that should have demanded an investigation and a stroll to Leavenworth before wars of choice to destroy Afghanistan, Iraq, Libya, Syria, Yemen and now Ukraine for that LIE that became the excuse to loot everyplace else in order to pay for an ever expanding “wai$t-line” of Defense Spending now going to Eastern Europe which will translate into their own END!… And of course when China and India (who hauled away the crime scene https://www.911research.wtc7.net/wtc/groundzero/cleanup.html) as a bennie to an American work visa… And Russia who simply ignored it and “looked the other way because the business at the time they believed was too good!… Until 2022

When chickens come home to roost!!!

Confusing article. I cant see the problem Italy government try to appropriate the plant to secure Italy. Off course this means less opportunities to speculate in the company and so what?

Russia once again is Looking Like A Fool! When will it ever end?

Matt
Reply to  Ghost of Moscow

“”Russia once again is Looking Like A Fool! When will it ever end?”

When Mother Russia grows a pair and announces it’s resignation from the Ca$in0 at 405 E 42nd St, New York, NY 10017 in order to protect it’s foreign service from THIS (https://www.bbc.com/news/world-europe-39237748) (https://www.youtube.com/watch?v=L2XNN0Yt6D8)… And it’s market(s) like oil and gas with the purchase in Roubles and physical PM!…

Was that a satisfactory enough response?!…

One could think that this damage was done on purpose in order to lower the company’s sale price for a potential buyer. Cui Bono? We shall see…

People of Sicily, once your plant closes, it won’t reopen. The NWO do not want petrochemicals in their NWO, not for the masses anyhow. Rid yourselves of dirty USMIC money and earn it honestly. No more a US bitch.