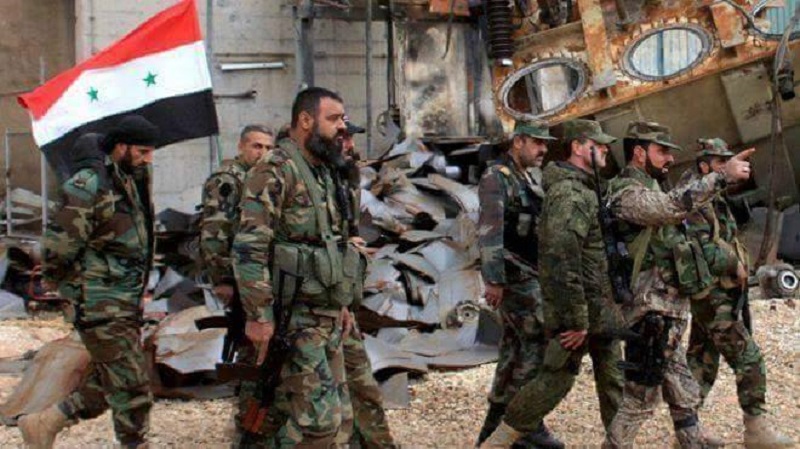 AlMasdarNews reports: From the battlefields of the Ghab plains, to the mountainous desert of the Shaer oil fields, and the fertile plains of east Aleppo, the Tiger Forces have become the center of attention of all those who follow the raging Syrian war.

Feared by the enemies, revered by the allies, little is known about the underlying factors and tactics that make the Tiger Forces the formidable force they are.

They generally work quietly and attempt to withhold information about their preparations and whereabouts until news of their thunderous advances storm the media battlegrounds. Tiger Forces don’t announce the capture of an area until they become fully confident they will not concede it.

To understand what truly makes the Tiger Forces the force to be reckoned with in the battles against the various jihadist factions, we must understand the tactics and strategies of the opposing force.

Suicide bombers are typically men who volunteer to drive armored VBIEDs into enemy front lines to break them and scatter their morale dealing a ton of damage in equipment and lives with their explosives-packed vehicles. They’re usually sent at the beginning of any battle.

Then come the Inghimassiyeen (suicide fighters). Those are entire suicide teams sent to infiltrate the enemy front lines and blow their suicide belts up further fragmenting the defensive positions and trenches of the opposing force, demoralizing and breaking them potentially forcing them to flee and abandon their positions.

Following the previous two waves of suicide units, the Iqtiham units (storming forces) begin their attack. Those are regular infantry given the task of seizing and fortifying the enemy positions targeted by the bombers. This whole combination of attackers makes the jihadists a formidable and fearful force in the face of their opponents.

On the other hand, the Tiger Forces prioritize targeting the opposing TOW and ATGM rebel teams in any region they aim to capture. Moreover, they have teams dedicated to spotting enemy ATGMs and dealing with them.

Secondly, they have units assigned to track and target VBIEDs before they reach their intended targets. Those units are especially skilled in this field because of their unrivaled experience the previous fall when the Tiger Forces were tasked with lifting the siege off Kuweirus airbase. ISIS fighters would rely heavily on car bombs and suicide attacks to push back the advancing enemy.

Thirdly, Tiger Force soldiers have unparalleled close-quarter combat training. Units placed in advanced ambush points are tasked with dealing with the “Inghimassiyeen”(suicide fighters) and neutralizing their threat. They also were gifted with an ample experience from the east Aleppo battles with the ISIS terror group.

Most importantly, the commanders of the Tiger Forces are always on the front lines with their soldiers, leading them by example and keeping their morale high. Units from the Tiger Forces never receive orders to storm or defend certain areas without their field commanders being on their sides guiding them and boosting their spirits. Colonel Suheil Al Hassan himself is known to accompany his men in the front lines of the battle to an extent that he was injured several times- on some occasions more serious than others.

However, the trade off of maintaining his troops’ high spirits makes the risk worth it. A myth shared and believed widely by many Syrians and avid followers of the Syrian war is that when Colonel Hassan is tasked with seizing an area, no matter the length of time it may take him to capture it or the tactics and methods he uses, he will capture it.

It is childish to peddle in mere myths, but his track record of heroic and mystical military victories has held up the claim so far. Distinguished and talented military figures like Suheil Al Hassan and General Issam Zahreddine have become household names whom kids take as role models and yearn to become like them one day.

Whatever the future may hold for the Syrian conflict, the elite Tiger Forces are destined to be an integral part of it.

Long live the SAA! I hope you take back all of your country while stomping those dirty rats!

The bit about ISIS tactics is interesting but the rest of this is 100% fluff and propaganda.

Even propaganda can be true and it is also true that successes enhance the morale of troops.

In my estimation a large part of the SDF, and most certainly the YPG, have also this high morale, fighting apirit and success.