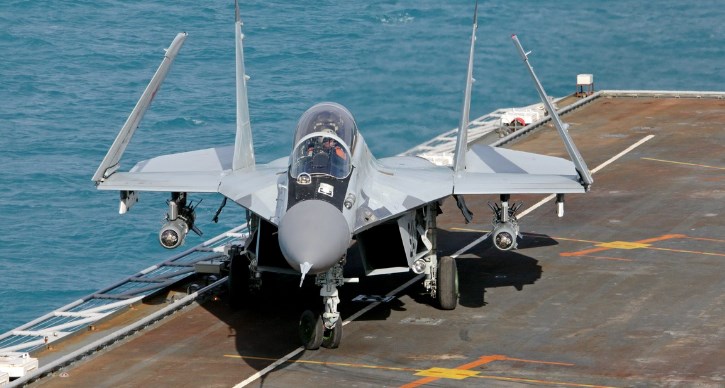 Recently the armed forces of India received delivery of additional Russian MiG-29K fighters. These are to replace the British vertical take-off and landing capable Sea Harriers which had been a part of India’s air fleet. Opponents had predicted that the Russian contractors would be handed a defeat in the contest over who the Indians would choose to replace the Harriers, but they were mistaken as India enthusiastically ordered the Russian-made MiGs. It was decided that the Russian aircraft would join the 303rd Indian AirForce squadron “Black Panthers” at their Hansa base in the state of Goa. The British aircraft will be canned and handed over to aviation museums.

Chief of Naval Staff of India, Admiral Robin Dhowan, openly stated that the supersonic, multi-purpose MiG-29Ks were being added to the military “with great pride.”

“These excellent machines are already integrated on the aircraft carrier Vikramaditya, and now, after the exit of the Sea Harrier, they will fill the role of the principal fighter and defender of the Indian air space,” explained the spokesperson for India’s military command.

According to the words of the admiral, under the terms of two contracts for the delivery of MiG-29Ks, the Indian Navy has already received 31 out of 45 ordered Russian fighters. It is planned that they will eventually be used on the new aircraft carrier Vikrant as well.

The carrier-based MiG-29K is a multi-functional, generation 4++ aircraft, designed for sea combat situations. It is meant to gain air superiority and engage targets on sea and land with precision weapons day or night, in any weather conditions. They are capable of reaching speeds of more than 2000 kph, fly distances of up to 1500 km, and in group actions can destroy entire enemy carriers.

MiGs with the “K” initial received an upgraded airframe making significant use of composite materials and an integrated digital “fly-by-wire” system with multiple backups. The wings include a unique feature called vortex flaps which are raised while landing to increase lift and decrease the aircraft’s oscillation. During flight, these flaps are folded down against the hull. They also make use of extra fuel tanks, in particular one installed behind the pilot in the single-pilot version. Not only is the flight range extended, but it also introduces the capability to use the MiGs in the role of tanker aircraft for refueling other aircraft.

The naval MiG-29K/KUB is the foundation of a new, standardized fighter family which also includes the MiG-29M/M2 and the MiG 35/Mig 35D. “K” stands for craft with a single pilot while “KUB” is for the two-seated variant which also can be used as a training aircraft. The Indian airforce is the first customer for the MIG 29K/KUB. They were selected after a competition was held for the flight crew of the Vikramaditya aircraft carrier and the future Vikrant carrier. In 2004, a contract worth $730 million was signed for the development and delivery of 16 naval fighters. This agreement was successfully fulfilled in 2011 at which point a second contract was signed for $1.2 billion for the delivery of another 29 MiG-29Ks by the end of 2016.

It should be emphasized that this aircraft is also being used by the Russian navy. At the end of 2015, the MiG aviation company fulfilled a government contract for the delivery of 24 fighters of this model for the Russian naval airforce. The head of naval aviation, Major General Igor Kozhin said that the airforce decided to form a new fighter regiment which will receive the MiG-29K.

The press secretary of the Northern fleet, captain first class Vadim Serga, stated that in order to maintain military readiness the heavy aircraft carrier Admiral Kuznetsov underwent major overhauls from May to August 2015 in Roslyakovo in Murmansk oblast. Admiral Kuznetsov operates MiG-29Ks. In October, the carrier already was participating in planned military exercises in the Barents Sea. According to Serga, the operation of mechanical and technical systems were rigorously tested and passed inspection during the overhaul.

Test pilots working with new aircraft weigh the craft’s flight performance and technical characteristics very carefully. In fact, when discussing the updated MiGs, the pilots are prefering to consider them not as a variation on the MiG-29 but as a totally new aircraft.

“This is a modern multi-role fighter with new military capabilities,” said decorated test pilot Pavel Vlasov. Vlasov is a Hero of Russia and the General Director of the M. M. Gromova Flight Research Institute where he previously served as Deputy General Director until his promotion in 2010. “The fighter has an increased payload and a greater assortment of compatible weapons.”

According to the pilot, the ship borne MiGs sport multiple new features including Kruger flaps (a motorized element of the forward part of the wings used to reduce landing speed), new flap designs in general, and a modernized control system.

“It’s a wonderful plane,” remarked test pilot first class Mikhael Belyaev, who is testing the craft on the flight deck of the Admiral Kuznetsov. “From the very beginning they were vuilt for greater maneuverability, safety, and automation, as well as simplicity and intuitiveness in handling for the pilot. This aircraft has huge potential and will remain state-of-the-art for the next 10 to 20 years.”

The general director of the MiG corporation, Sergei Korotkov, has underscored that the MiG-29K/KUB is equipped with an improved interface system linking the pilot with the aircraft. The crew enjoys the support of an information feed and effective navigation hardware which allows the approach for landing to be guided by auto-pilot.

According to decorated test pilot and Hero of Russia, Nikolai Diorditsy, the MiG-29K is more dynamic on landing than the SU-33 and similar aircraft due to its digital fly-by-wire control system.

“And it’s better on takeoff as well, considering the thrust-to-weight ratio,” added Diorditsy. “On new MiGs it’s easier to maintain the direction of your takeoff; the aircraft manageably launches from the trampoline.”

It’s interesting to note that the Indian customer was very meticulous in coming to the decision to buy the Russian planes.

Over the years it’s been training, the Indian squadron of MiG-29Ks has flown more than 2500 hours, gaining experience not only with the aircraft but also with its full range of armaments including guided air-to-surface and air-to-air missiles, bombs, and unguided rockets. Per the demands of its future operators, the MiGs’ takeoff and landing capabilities both on land and carrier runways were tested while using only one engine. Both the Indian Navy and AirForce have trained on the aircraft. Such a stringent battle testing has shown that the Russian plane is more than a competitor to the British Harrier.

Not only are the aircraft being delivered to India of Russian-make, but the weapons they carry are as well. Among these are mid-range air-to-air missiles with radar homing, self-guided close-range R-73E missiles, and anti-ship Kh-31A and Kh-35E missiles. Indications are that these weapons have no competitors anywhere in the world. Also in the armament of the Indian MiGs are guided and free-fall bombs, unguided rockets, and 30mm cannons carrying 150 rounds. Importantly, the MiG-29K/KUB can operate in any weather conditions, at any time of year, and at any latitude. This includes tropical climates with temperatures of over 35 degrees centigrade and humidity reaching 100%. Needless to say, this is India’s climate

Tbh, the article is putting a wrong spin. The harriers were retired because the 6 + their carrier Viraat is also being retired. It’s just 6 harriers on it,

The harriers served their purpose. Lucky India did end up with the joint strike fighter.

The UK-Empire has always made crap goods. Even their Jaguar automobile has always been sent to the ethnic-Germanic tribes in central Europe to fine-tune the engine and electronic mechanisms. Russia, USA, Germany, Japan, Italy. Iceland, Greece and Spain have always made find worthwhile goods. The UK and China and Turkey make crap quality stuff. Wast of money, poor craftsmanship.

Rather a stupid comment. Tried to get the electrics on an Italian car to work? What do the Greeks make? US competitiveness is in free fall. Iceland, that manufacturing powerhouse, ha, ha. Your view of China is one of typical ignorance so you have little credibility. Even the Germans and Japanese are now realising what a Juggernaut China is.