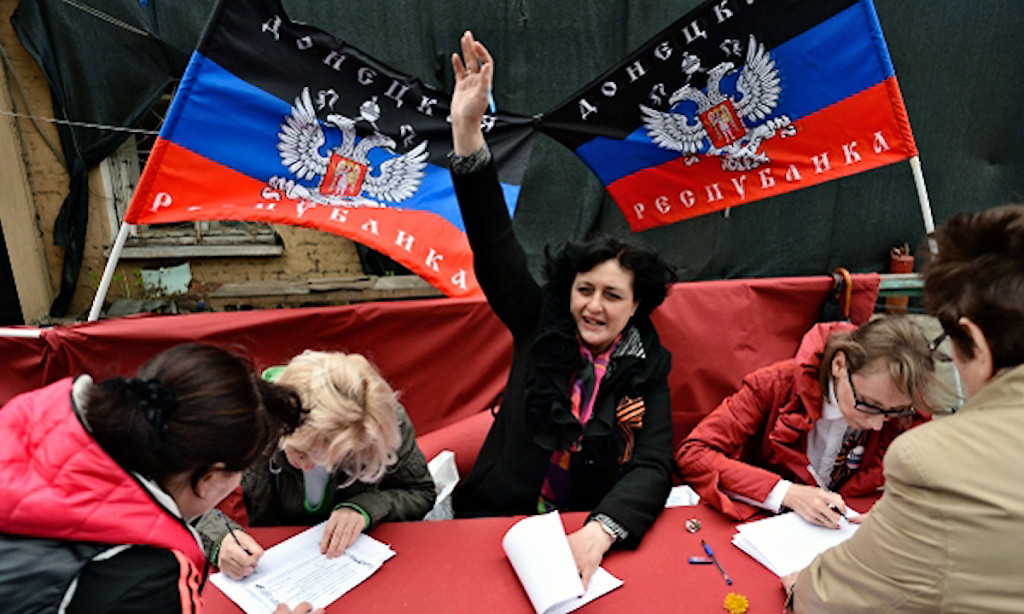 The article is prepared by Maria Smirnova for SouthFront

The local elections in Donbass jeopardize the entire system of government which has been built by the Kiev government. During the one and a half years, the Ukrainian leadership is trying by force to subdue the Donbass. Completely isolated young republics in the economic, transport and trade terms. Kyiv is a tough military policy in relation to its citizens.

Despite the fact that the item on the local elections in Donbass was listed as one of the main conditions for the implementation of Minsk agreements, Ukrainian side refuses to perform signed commitments. In this way not recognizing the autonomy of the republics in their decisions, even in a part of Ukraine.

The head of DPR Alexander Zakharchenko said that the election of the heads of cities and districts of Donetsk People’s Republic will be held on 18 October. The head of LPR Igor Plotnitsky called the election on November 1st.

At the same time the President of Ukraine Petr Poroshenko insisted that the elections in Donbass will be appointed by the Ukrainian authorities. His expressed opinion the president has reinforced the constitutional status. July 14 Verkhovna Rada adopted the law on local elections unilaterally, without coordinating it with the republics. According to this law the local elections will be held in Ukraine on October 25 but elections on October 18 and November 1 in DPR and LPR will not be recognized by Ukraine.

Invited to the monitoring of the local elections in DPR on October 18 OSCE representatives have confirmed their participation in the elections.

The head of DPR Alexander Zakharchenko said that the holding of elections is a threat to the current government of Ukraine. In DPR the local elections will mean the completion of the construction of the “foundation” of an independent state.

September 16 the head of DPR Alexander Zakharchenko signed a decree on organizing in the republic local elections on October 18. “Donetsk People’s Republic is an independent democratic state, and the election of local self-government – a responsible and important step for every citizen of the republic”, – he said.

The head of LPR Igor Plotnitsky said that now unilaterally is starting implementing the Minsk agreements regarding the local elections in LPR.

After the meeting at the end of August the President of Ukraine Petro Poroshenko with French President Francois Hollande and German Chancellor Angela Merkel looms next prospect for the future. “We discussed the red lines, the crossing of which would mean a severe reaction of the EU and the international community. And it is not only about sanctions,” – Konstantin Eliseev said.

The head of LPR Igor Plotnitsky responded to this statement. “Poroshenko only speaks, but does nothing. But in an environment where there is fighting, threaten not only pointless, it’s obsolete weapons threat.”

What will happen after the election, an opinion expressed by a well-known war correspondent Gennady Dubovoy. He believes that subsequently will be initiated a referendum on the need for entry into the proclamation of the state of Russia.

“All the expectations of fighters are connected with this. No one wants to return to part of Ukraine – the journalist emphasizes. – No one sees the possibility of this. Nobody wants to stay in the present, the intermediate state, because that is economic degradation, and political and social dead end. ”

Both republics are determined independently express their will in choosing chapters in cities and regions. Provocations are expected from the Kiev authorities, up to armed attacks. However, the population of Donbass all their actions during the year and a half shows its resilience, fighting for the principles and prescribed constitutional rights that are violated by Ukraine.