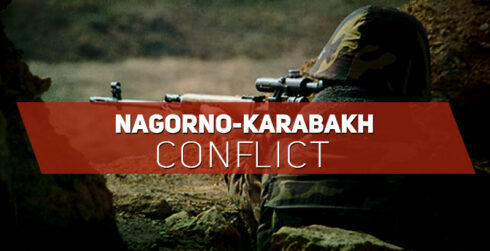 The Azeri side decided to escalate mere days after a meeting with US State Secretary Anthony Blinken.

After months of tensions, on July 31, Azerbaijan accused Armenia of allegedly attacking its military units in the disputed region of Nagorno-Karabakh, otherwise known as Artsakh to the indigenous Armenians. Azeri Ministry of Defense claims that Armenian soldiers supposedly opened fire at Azeri troops in Gadabay, Kalbajar and Khojavend. Initially, no casualties or material losses were reported as a result of the alleged attack, although the Azeri MoD later claimed at least one of their soldiers was killed. Azerbaijan claims that it took “retaliatory measures”. The Armenian side denied the accusations and stated that the situation in Nagorno-Karabakh is stable.

Nearly 2000 Russian peacekeepers have been deployed in Nagorno-Karabakh to enforce a ceasefire agreement signed after the large-scale Azerbaijani attack on Armenian forces in 2020. The latest escalation is the first one since March when Azeri attacks claimed the lives of at least three Armenian soldiers. This wouldn’t be the first time Azerbaijan is accusing Armenia of attacking its troops. Given the rather difficult position of both Armenia proper and Artsakh, it’s unclear why they would want to escalate against Baku, given the clear superiority of Azeri forces in the last several years. Azerbaijan is most likely trying to provide yet another pretext to resume its offensive in the region, especially now when Russia is preoccupied with its counteroffensive against NATO aggression in Europe.

It’s quite clear Azerbaijan is trying to use the current geopolitical situation to fulfill its long-term goal of capturing the entire territory of the Armenian-populated Artsakh. However, this would require Baku to effectively go against Russia’s interests. Moscow has warned Azerbaijan against escalating the conflict any further. Despite the successful geopolitical game Azeri leadership has been playing for years, balancing between the Eurasian giant to the north, Turkey and the political West, this is reaching its high point and Moscow is highly unlikely to allow further attacks. Back in March, Russian Defense Minister Sergei Shoigu warned Baku that the Russian military is more than capable of conducting large-scale operations in multiple theaters, clearly implying that no unilateral Azeri action will be tolerated. Baku complied and halted its attacks.

However, in late July, both Armenian and Azeri delegations visited the United States and met with the US Secretary of State Anthony Blinken. While there is no way for us to know what exactly the US political leadership told either side, apart from the usual diplomatic statements of “hopes for peace”, the very fact that the Azeri side decided to escalate the situation mere days after the visit is quite telling. It certainly is in the interest of the belligerent imperialist thalassocracy to see any kind of escalation in the former USSR, especially in areas where Russian troops are directly deployed, as this would divert Moscow’s attention away from Ukraine. American intelligence assets have been reactivated all across the former Eastern Bloc to do exactly that, be it Kazakhstan, Uzbekistan, Serbia/former Yugoslavia, etc.

An escalating conflict in Nagorno-Karabakh would also benefit the US in the sense that it would further undermine relations between Russia and Turkey. Although both countries have been maintaining a sort of “Frankensteinish” geopolitical partnership, compartmentalizing their diametrically opposing interests in one region with converging interests in another, in the long-term, Moscow and Ankara are bound to clash. Erdogan’s attempts to create a combination of a Turkic and Islamic world dominated by Turkey go directly against the interests of Russia, Iran, Syria and other global and regional powers. The political West quietly supports Turkey in this endeavor, or at the very least is not against it. Erdogan’s imperialist fantasies are perfectly positioned to undermine the long-term goal of creating a stable Eurasia, composed of powers such as Russia, India, China, Iran and others.

By having Azerbaijan capture most, if not all of Artsakh, the US accomplishes the goal of having Armenia proper effectively surrounded by hostile countries. Given the sheer belligerence of Turkey and its ally in Baku, it’s highly likely they’d try to attack Armenia itself, which would both eliminate it as a state and allow the Turkic countries uninterrupted access to each other, as well as open the gates of Central Asia for Ankara. To accomplish this, not even the whole of Armenia has to be taken. All Turkey and Azerbaijan need is Armenia’s southern Syunik province. Given that Armenia is a member of the Collective Security Treaty Organization (CSTO), a NATO-like security alliance led by Russia which also includes a number of post-Soviet states, this would force Moscow to react.

Such a move wouldn’t only push Russia into another conflict, but could possibly shake the very foundations of CSTO itself, as countries like Kazakhstan, Kyrgyzstan, Tajikistan and Belarus would also need to respond to Yerevan’s call for collective defense. Russia couldn’t simply ignore Armenia’s fate, as any sort of Turkey’s direct, uninterrupted access to Azerbaijan and further east, to Central Asia, would be even worse for Russia’s interests and strategic security on its entire southern flank, from the south Caucasus to China. This leaves us with only one logical conclusion – Baku is overplaying its hand, as Russia will certainly not allow any changes to the current status quo in the region.

Of course the west ( England think bureau ) is using Turkey against Russia to make Turkey 100 % on the USA side but that could mean Russia at war in Syria against Turkey and no oil/gas as an “unfriendly country ” -sorry two-faced “friends ” are not and never have been allowed by me – ONE TRUE friend -loyal -uninfluenced is worth a thousand “friends “.

Jew agenda is to profit from endless wars, Armenia is a side show, just pay attention to Kazakhstan and the Stans where the Americunts are Jews are infiltrating, trying to gate crash Russia’s front yard and also set up bases against China and Iran. Russia, China and Iran really need to develop an integrated defence alliance and intelligence sharing.

Given such a situation, one could easily spot the active russophobic engagement of the Anglo-Saxon bloc believing that RF could not handle military multi-tasking operations.

CIA/MI6/SOROS INSTIGATE TOWARDS STOPPING THE PEACE,BUT RUSSIA KNOWS THIS TOO WELL! The sooner all soros linked (dud christians) Run ot of centres and blood money funding,the sooner will bring upon peace and prosperity to all otherwise whom be of concern.Armenia must rid soros!

PASS THIS ON TO THE KREMLIN TO PASS ON TO THE TRAITOROUS AZERI’S, TURK’S& THEIR US-NATO BED MATE’S: Nights Are Longest in The Depths Of The Lubyinka Gulag.Two Can Play The Game Of Traitor And Regime Change!!.The Rudina’s Sword ⚔️ Of Vengeance is Never Sheathed Once Drawn!!.Smyert Spionam!!.ALL AMERICAN SPIES AND THEIR ACCESSORIES WILL BE FOUND AND PURGED THAT INCLUDES THE GOVERNMENT IN BAKU AND THE WOLF WHO PRETENDS HE IS A FRIEND IN ANKARA, THERE WILL BE MANY MORE AMERICAN SPION BODIES TO DISPOSE OF ALL OVER EURASIAN AXIS THIS SEASON OF ☠️ DEATH!!!. SLAVA RUSSIA!!Z!!.

… especially now when Russia is preoccupied in Ukraine…

I cannot fathom what kind of analyst comes with such sentences. Anybody spending some time in -or even observing- the military or decision-making understands this is not how countries work. At any given time, most of the countries are dealing with several types of crisis at the same time, the bigger the country, the more crisis and in larger distances. Now we are talking about the largest country on earth spanning 11 time zones for crying outloud! Russia didn’t even bring regular armed forces to the Ukraine, I’m sure they are more than capable to manage relatively small groups of peace-keepers or military operators in Syria and Karabakh as well. More so, it’s easier for them to get involved in southern Caucasus instead of later having to deal with threats in half of their southern loooong border.

Most countries depending on their size, created several military districts to manage the threats. These districts are designed to operate independently but in harmony with the central command. Have you ever heard such things about the US? US can’t deal with [fill in the blank] because it’s preoccupied in X and Y and Z right now. We never heard it and likely never will, at least as long as US functions in its current structure. They are never shy or preoccupied about starting or get involved in yet another war. The same applies to Russia, but this time the danger is so real and imminent for us that if something happened, it won’t be just Russians. Aliev won’t directly attack Armenia because it unleashes all kinds of hell on him (not as a result of Armenia’s might). What he tries to do I explained under another article, “Azeri Gambit” or something like that.

Let’s not forget where Aliev’s capital is located and is protected by… what navy!?

Shhh…. I believe we’ll hear exciting news about “Husseiniyun” in Baku soon. Just a heads up.

It appears that you’ve finally found an employer in the US, but the question of visa that allows you to work would be difficult since you entered the country illegally. A simpleton like you must be very grateful.

we are petty unhappy people; we believe these insignificant skirmishes will harm Russia. Naturally we are always wrong; our immorality impairs our judgment of reality. we are USA #1 monkey pox

Didnt Pashinyan promiss to quite leaddership after the disastrous result of the war in 2020? He was even suspected to work against his own country’s military, so it makes perfect sense this traitor or his diplomats were invited at same time as Azeri to meet Blinken

And the west is historically very indifferent to Armenians being ethnically cleansed.

“Erdogan’s imperialist fantasies are perfectly positioned to undermine the long-term goal of creating a stable Eurasia, composed of powers such as Russia, India, China, Iran and others.”

This statement overlooks the fact that a strong pan-Turkic movement led by Erdogan stretching from China all the way to Kosovo would provide the greatest security and stability for Central Asia under a new Ottoman Empire.

The author is correct in identifying the extreme south of Armenia as the area which Turkey and Azerbaijan must take to complete the required land bridge from Turkey eastward.

The author also correctly predicts that the incompatible interests of Turkey and Moscow must ultimately end in a contest. Greater Idlib is a test tube where those conflicting interests presently confront each other.

If Turkey, Azerbaijan and Israel coalesced in a military alliance to open the path eastward for Turkey through Nakhichevan Iran would not interfere. Regardless of Russia claiming Iran as an ally, Iran does not need a war over areas to its north that don’t contribute directly to its interest. It is focused on naval influence in the Persian Gulf and Arabian Sea and points westward. Hence its deep investment in Yemen.

Watch Georgia and Kyrgyzstan and Kazakhstan.