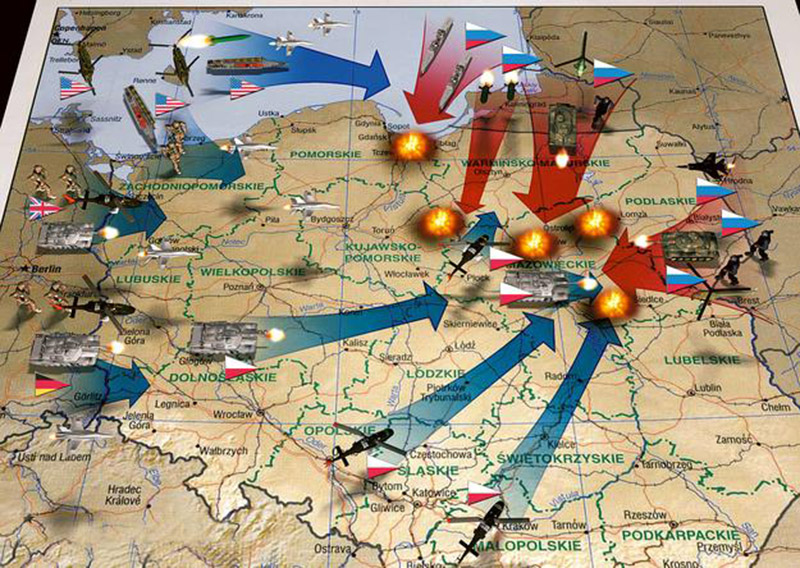 Following a military putsch in Moscow, an unpredictable dictator comes to power.  A few weeks later first shells start falling on Polish cities, and armored columns enter Poland from Kaliningrad and Belarus. Answering the attack, Polish tanks and air cavalry enter into battle. And only a dozen hours later US, German, and British forces begin to arrive at Poland’s western airfields and sea harbors…

This is not a movie thriller script but actual plans to defend Poland against Russian aggression which have been revealed by the Wikileaks portal. The plan to defend Poland, as well as Lithuania, Latvia, and Estonia from Russian attack is titled Eagle Guardian. Until recently it was one of the most closely guarded NATO documents. But the world has learned of its existence thanks to Wikileaks’ disclosure of secret correspondence among US diplomats.

What does the NATO plan contain? In the event of attack by aggressors from the East, NATO is to face them with as many of 9 divisions of various kinds. Four of them will be Polish, and the rest are to be swiftly deployed to Poland by the US, Germany, and UK.

–The first divisions to see combat would be Poland’s armored and mechanized divisions, the 11th and the 1st, respectively. Additional divisions will no doubt be formed using airborne and special operations troops, explains General Roman Polko,

Allied units would reach Poland by land and sea through the border with Germany as well as using air and sea transport. In recent times, the Swinoujscie and Gdynia harbors were modified to allow docking by amphibious assault ships and warships. The US supposedly also committed itself to support us with additional F-16 squadrons and C-130 transports capable of transporting paratroopers and light armored vehicles.

Following the release of secret documents, Russia has demanded an explanation.

–We need to establish whether NATO is indeed making such plans in secrecy, thundered Leonid Slutskiy of the State Duma International Affairs Committee.

NATO is run by people that live in a world of total fantasy.

If Russia ever invades Poland, NATO’s response will be to defecate themselves and then press the ‘button’ – THE button which will end all wars and the memory of war.

Why would Russia invade Poland ?

Because NATO would use Poland to attack Russia – that has to be what NATO is planing contingencies for and what Russia fears – my guess.

If anything Russia only invades countries through ideological subverters which are actually not bad if you think about it seeing as how they spread good christian values and a sense of European sovereignty as opposed to being EU puppets.

That is a hypothetical plan . Many things can happen shortly . The USA dollars becomes toilet paper very soon , The USA administration will be forced to close the military bases after the collapse of the value of the USA toilet paper that could be worth only a fraction of his present value . Following the withdrawal of the USA occupation forces , NATO will disintegrate and every European state will make agreement with Russia . The Zionist will be on the run and will be hunted down like rabid dogs . Their ill gotten money will be sequestered by the states .

The future is banging on the on the door, let it in. German and Czech citizens told by authorities to stash water & food at home. Next stop Poland.