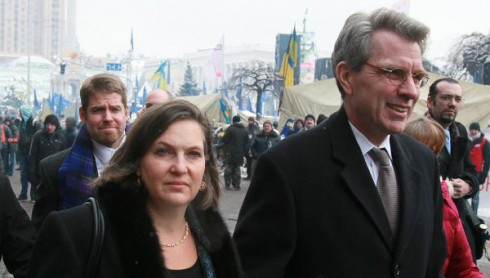 Many of the explanations and analyses of the Maidan and the overthrow of President Yanukovych which attribute these events to the “Hand of Washington” (which is a distant cousin of the “Hand of the Kremlin” oft-encountered in Western media accounts of events in Ukraine and other parts of the world) unfortunately betray little understanding of the inner workings of the US government and its aid/assistance/fifth column promotion programs around the world. So let’s start with what, exactly, those $5 billion so helpfully mentioned by Victoria Nuland actually represent.

One gets the impression, again, from reading many of the of the explanations and analyses of the Maidan, that the US simply delivered these $5 billion (in non-sequential, unmarked, small bills, no less) to Poroshenko, Yatsenyuk, Turchinov, Tyagnibok, Yarosh, and the rest of the Banderite regime so as to gain their loyalty and to transform them into pliable tools in the hands of the US State Department. The reality, alas, is slightly more complicated.

For starters, does anyone remember (or can find) any discussion pertaining to a $5 billion US Congress appropriation for the purpose of promoting democracy in Ukraine? No? Well, neither can I, and there’s a good reason for that: no such appropriation exists and, no, there isn’t some “black” program from which that money has sprung. Note that the $5 billion works out to approximately $200 million a year, on average, over the 25 years of Ukraine’s “independent” “existence”, and represents the sum total of every single US aid program to Ukraine over that period. If you want to take the trouble and go through US Congress annual appropriations for the Departments of State, Defense, Commerce, Energy, Justice, and few others (because just about everyone got a piece of this action), I’ll bet you it will add up to something in the neighborhood of $5 billion. In other words, Nuland was claiming something that was not quite true, but what else has she ever done in her official capacity?

Since I was part of the epidermis of the Hand of Washington during the time period in question, I had direct contact with a fair part of that money, the part that very effectively and quite irreversibly deprived Ukraine of its nuclear arsenal, nuclear weapon delivery vehicles, and the ability to reconstitute a nuclear capability of any sort (you are welcome). Now, did any of that money actually find its way into Ukrainian pockets? Very, very little. For the most part, we are talking about the value of goods and services, which in turn include US contractor salaries, airfare, lodging, per diem, and suchlike. Given the rather stringent “Buy American” provisions of most US foreign “aid” appropriations, about the only time any Ukrainian actually received any US direct funding is when they traveled to the US, which entitled them to the official US per diem payments (basically, meals and incidentals). And that’s pretty much it. Every other US aid program operates pretty much the same way: the idea (and the reason the US Congress votes for the stuff) is to put money into the pockets of US defense firms and contractors, not in the pockets of wayward Ukrainians. Granted, there’s also the US intelligence community which may well be funding this or that hapless Ukrainian politico, but no way does this amount to anywhere near $5 billion.

Moreover, given the sheer level of “stovepiping” and turf warfare among US government agencies, all of these aid programs were running in parallel with one another, often duplicating functions, frequently working at cross-purposes, and with little sense of some grand strategy animating the whole enterprise. Certainly, it may well be that somebody, somewhere, was hoping to use this or that aid program to establish a pro-US regime in Ukraine and then use it as a weapon against Russia, but how does that square with the ongoing (and far better funded) disarmament of Ukraine that was happening right at the same time??? The short answer is: it doesn’t. Because Washington had (and still doesn’t) no grand strategy for dealing with Ukraine.

So how does the Orange Revolution and, especially, the Maidan fit into all this? The one major role these aid programs played was as an incidental but at the same time irreplaceable source of political intelligence. US Embassy officials often go out to see what is going on, meet their Ukrainian counterparts, have formal and informal discussions, and then they go back to the embassy and write nice little reports on what was said. Which gives people in Washington a pretty good idea of who is who in Ukraine, who wants what, and who has the wherewithal to get it. Of equal importance is the fact that key Ukrainian players get a sense of what it is that the current US administration wants, and what it be willing to let this or that chocolate billionnaire get away with.

And that is, pretty much, the sum total of the road that led us to the Maidan. Poroshenko and others knew that the Obama Administration was in the market for a regime change in Ukraine, since it needed a foreign policy triumph of some sort (given that its foreign policy has been an unmitigated disaster) which would incidentally diminish Russia’s position in the world. That much was clear since the so-called “Magnitskiy list” and other US chicaneries aimed at Russia which communicated to the Poroshenkos of the world (as well as Russia’s own domestic “liberal opposition”) that the US would look kindly on anyone pursuing policies harmful to the Russian government and Russia in general.  It might not seem like much, but the promise of eventual US (and EU) recognition and, possibly, financial assistance or some other form of preferential treatment after you’ve finished with your coup, was actually the decisive factor. Had Poroshenko known that the West would stand by Yanukovych no matter what and continue to recognize him as the legitimate president of Ukraine, the Maidan coup would have had no chance of success and Poroshenko would have been mad to attempt anything of the sort. Except that he knew better, and he no doubt took the trouble of confirming in person (with Nuland and/or Pyatt) that his assessment of US welcoming a pro-Western regime in Kiev was correct. But it’s highly unlikely Nuland or Pyatt came to him first and tapped him on the shoulder to lead the revolt, and then organized and financed the Maidan for him. That part was Poroshenko’s responsibility.

Therefore if one is interested in preventing future Maidans, it would be futile to look for billions of dollars changing hands, training programs, and other signs of direct US/EU involvement. What the Maidan possible was the combination of three factors: US almost-official preference to have a more pliable regime in Kiev and possibly ultimately in Moscow; the dissatisfaction of a sizable portion of Kiev elite with the Yanukovych regime; legitimate grievances concerning corruption on behalf of the masses, many of whom naively turned up on the Maidan thinking it was about them! And, indeed, if one looks at the post-Maidan Kremlin policies, they are aimed at all three of these factors: dissuade the West from pursuing regime change policies in Eastern Europe; consolidate the elite; pay close attention to the mood and well-being of the masses. Finally, the recent moves to rid Russia of Western NGOs and the curtailment of various “aid” programs to Russia is also a perfectly legitimate step designed to reduce the US ability to collect political intelligence, which is essential to neutralizing the first two factors mentioned above.

This article is very interesting. I had read Nuland’s words paraphrased so I looked them up, and this is the best account of the 5BN USD I found. However, US is still clearly responsible for the coup. Nuland’s intercepted call is solid evidence. Also we know how US operates. Soros’ NGOs were certainly involved. They were in league with US, as we know from the DC Leaks: http://soros.dcleaks.com/ Did Soros’ NGOs get any of the 5BN USD?

Yo, do you have an updated link neil?