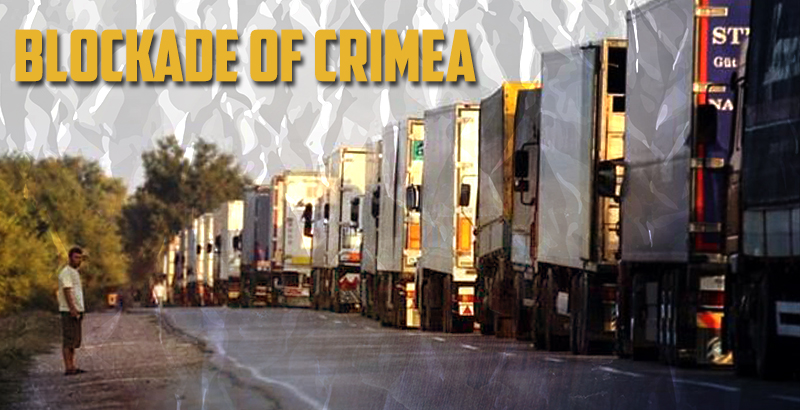 Peeeople! Men! Hey…. where are you? Why aren’t you discussing hunger in Crimea? Why aren’t you writing an appeal to Putin or to the UN about Crimean children who are bloated from malnourishment? Why then did the most Tatarist Crimean Tatar Dzhemilev start all this trouble?

The readers are probably thinking that I am slightly not myself. What hunger? There are other problems in the minds of “the global community”. The Russians are shredding all these ISILs and other vermin in Syria for okroshka (Russian cold soup). General Moroz checked the Russian, Ukrainian and basically the defense of all the cities in the northern hemisphere. Refugees in Europe have become more in force. They are not just asking, but demanding. What are you talking about Crimea? And what is this about Ukraine?

You are arguing apolitically, comrade Saakhov used to say in a famous movie. There is no such word as “Ukraine”. There is no money for the sufferers in this country, God forgive. And if there is not money, then who needs Ukraine and why? That is the kind of a logical chain that emerges.

So, let me remind you about the “Crimean food crisis”. All of Ukraine knows that patriotic Ukrainians…. no, this is better: Ukrainist patriots are former Crimean Tatars (former, because they don’t live in Crimea anymore) and Tatarist patriots are Ukrainian SS. In order for the nipple principle to work…you know, the one that’s in the tires, either bicycle ones automobile ones. This principle was clearly articulated some time ago by my neighbor, a tire-mounting worker. Blow into, but not out, so that oxygen does not come out.

Out, according to the given principle would be Ukraine. And instead of oxygen, we are talking about food and other products. So that everything fits into this finishing (out) principle.

And everything started off well. They put up tents. MP is driving a stolen armored vehicle. Dzhemilev with Chubarov are in their unbuttoned coats. The only thing missing is a newspaper in their inside pocket. And there are boys in camouflage with a confident physiognomy on their faces. We will block and will not give.
There are crowds of traitors selling potatoes and other provisions, and they are on trucks. They are outraged and ripping their undergarments off their chests. They are littering with their potatoes in the nearest ditch. Victory….

The journalists are running around in packs, clicking with their cameras. The Internet is filled with publications from Crimean sources. A Ukrainian blogosphere dazzles with rants about the rightness or wrongness of the present stock. Ukraine has divided into sections. Some want a full blockade, and some, on the contrary, want a take down. Interesting this life is. You don’t even need to follow an increase in rates or the shortage of gas elsewhere in winter.

But a week went by and that’s it… The trucks with produce disappeared somewhere. The journalists are not here. Those traitors keep glancing at the bus more and more often. They didn’t get paid the promised money; therefore they don’t need this kind of patriotism. Going home where it is warm, or somewhere to make an earning.

For some reason the trucks drove off in a different direction, but also to Russia, and are now showing up in Crimea but from the ferry side. Or they will drop off product in the nearest Russian town and then back home for a new batch of goods. And Russian businessmen are now delivering Ukrainian potatoes, or should I say Crimean businessmen.

But the most despicable thing is that Ukrainians themselves are opposing the victory. You see they are humanitarian. Well there are people over there also. But they aren’t people they are Crimean. And human laws don’t apply to them, according to Dzhamilev.

Can you believe that these humanitarians began transporting their goods by sea, on barges, at night, without running lights… A sneaking caravan of barges with smuggled bacon and vodka. It is footage for some Hollywood movie. Except that no one will shoot it. They are not bringing weapons but goods to those patriots, so they can sell it. It is not very movie worthy, not exciting enough.

But you can’t hide from Mustafa. He sees in the night as good in daylight. Better than any border guard with their technological bells and whistles. He comes out to the shore in his famous costume from his older brother, which is three sizes larger than his puny body and he sees… He sees the barges and those traitors digging a tunnel below the earth.

Mustafa will not be quiet. You cannot shut truth up! Immediately gets in the car and to Kiev. Mr. President.. Hey, Mr. President. Mr, your presidential mother, president… We have betrayal here. Unpatriotic peasants still want to sell their goods, and for some reason not for Ukrainian hryvnias but for rubles.

And they are breaking laws, all kinds of laws, Ukrainian ones and others, about a naval blockade in Crimea. Do you remember, Mr. President, ships are not allowed to enter Crimean ports.

But the Ukrainian president got smarter, especially after these last Paris talks. He legibly fended off all arguments about law breaking. What ships? Those are Ukrainian barges. They are not listed under the law. And then, you cannot enter into ports. Correct. Barges do not enter. They unload in their own areas, right at the shore.

Not the Ukrainian president would not be president of such a great country, if he did not help patriot Dzhemilev! Help will be provided in free style. Not in the brow, but in the eye!

Tomorrow there will be an order to work out an order for the beginning of storm season on the Black sea. Poroshenko promised to start that season in the near future. And that’s all! The way to Crimea for barges will be cut off.

So this is what victory means. Even nature is being subject to decrees of a people’s “victorious” president. If you don’t believe this, just wait. You will see the might of Ukrainian victory in reality. I guarantee you 100% that nature will submit to Poroshenko. Neptune over there will activate his storms for Crimea. And then these humanitarians will be jumping and leaping from Kherson Oblast and other betraying regions.

It is not in vein that both Neptune and Ukraine have a big fork as their main symbol of power! Neptune is an ancient Ukrainian as well. Except that he has a career. He became god, although an underwater one.