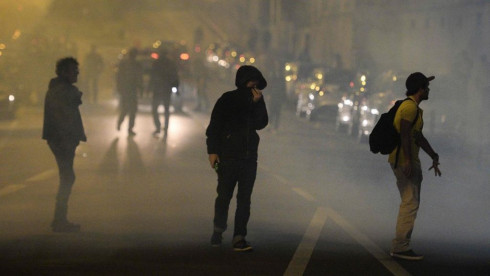 French “socialist” government has done a lot until now to provoke anger among the people, especially among the part that was supposed to protect – the working class. But the last move is something that could bring down this government and create instability in France.

Protests against controversial Labour Law have been going on for weeks. French workers, together with students, made it clear to the rulers in Paris that this law must not pass.

Anger at the streets of Paris

Protests that have been going on for the last few days, occasionally turned into riots. A lot of tear gas, water cannons and few Molotov cocktails – this has become a familiar scene with fight against new Employment Law

But protesters truly believed that they can stop this law, by pressuring political elite, and making it clear through public demonstrations how they feel.

Few nations have such traditions and will to defend their rights by force, as French have. Some are jealous of this traditions, while some aren’t but no one can say that French don’t know how to fight for their rights.Revolutions are something French know how to do. Decades before Russian October we had the most radical socialist government in history – Paris commune. It lasted only for a few months during 1871., but some ideas last forever. Resistance against injustice has become a part of French tradition.

But enough about history, let’s switch back to the present events because these events could shape history. So, thousands and thousands of angry French thought that by protesting they will create enough pressure and that French parliament will not have the courage to vote for the controversial Employment Law. Maybe they are right – French political scene is becoming polarized and maybe because of that politicians would never support this law.

But what happened last night? Something that will spread anger across France rapidly. Namely, socialist government, led by president Hollande, simply adopt the Labour Law (without voting in the parliament).

What is this about? Firstly, this is about the latest, but greatest, betrayal done by French Socialist Party. Secondly, it is clear that this law “had” to be adopted, there was no debate about this, nor it will ever be. It was decided that way the highest instances of power, one that connects political and capitalist class.

Ruling class can only hope that people will “blow off some steam”, and accept new reality, that all of this will last for a few days and that after some clashes, peace will prevail in France (that is, peace in which workers have less rights).

That is their assumption, and they made that assumption by looking around themselves. French “socialists” noted what happened on the other side of Europe, they saw how much Greek leftists (supposedly more radical than French) betrayed their own people and survived.
In the end it seems that modern European politics is dealing with opposition the “Turkish way”, which would be a method based on a large supplies of tear gas. They beat the people until they get tired, return back to their jobs and accept their lower standard of living.

“Democracy, where are you?”
Of course, the rulers in Paris are aware that what they are doing is not the betrayal like the one that happened in Greece. Let’s say it’s not, but the question is does it mean anything to the French people.

Those that gathered in front of the parliament in Paris shouted: “Democracy, where are you?” There is no democracy, not for things like this. But there is hypocrisy in abundance – namely, French president, Francois Hollande  criticized certain article of the French Constitution earlier. That article allows the government to adopt a law without approval of the parliament – which is exactly the article which they used last night!

French Prime Minister, Manuel Valls, stated that government decided to refer to the Article 49.3 so that “France moves forward”.

Which is absurd – one Socialist Party is doing everything it can so that their country can “move forward” by making their people lose more rights and make them “more competitive” (read: easier to exploit).

Furthermore, let’s mention that this is second time in two years that the Government headed by Prime Minister uses a decree to push pro-market reforms.

Many like to claim how today on the modern political scene  there is no more left and right – there is, but it’s become degenerate. Namely, previous French conservative right Government, led by president Nicolas Sarkozy, never dared even to mention law like this.

It’s weird, isn’t it? Actually isn’t. The thing is very simple – people that want to protect workers rights vote for the so-called leftists, while they betray them. France is not the exception, France is the rule – it’s everywhere around us, starting with US: George Bush never dared to give so much to corporations and Wall Street like Obama gave in his 8 years of power.

Let’s say something about this new French Employment Law. Those that are supporting it claim that this law is the solution of 3,5 million unemployed.

Namely, this law will make it easier for employers to lay off and hire workers. In other words, worker will never be sure does he have a job or he could be replaced with someone who is willing to work for less money.

In addition, the new law will make it possible to change 35-hour working week, and other regulations.
All of this will give birth to more resistance, and the French Government is naive if it believes that the protests will “deflate”. In addition, this struggle already created one particular movement, called “Nuit Debout” (Awake all night). We are talking about French movement against austerity measures and the deprivation of workers rights. The organizers of this movement call for the whole of Europe and the world to take to the streets this Sunday, 15th May, in a large protest. A call is rapidly spreading across social networks under the tag #GlobalDebout.