The Houthis announced on May 9 that the Yemeni Air Defense Force had targeted an aerial formation of the Saudi-led coalition over the northern province of al-Jawf.

A spokesman for the Yemeni group, said the formation, that consisted of several warplanes, was targeted with a “Fatir-1” air-defense system.

“The aggressor’s warplanes were confronted with Fatir-1 missiles, which forced them to retreat while they were attempting to carry out hostile acts in the province of al-Jawf,” the spokesman, Brig. Gen. Yahya Sari, said.

The Fatir-1 system, which was first revealed by the Houthis in August of 2019, is a locally-upgraded Soviet-made SA-6 “Gainful.” The system has an effective range of 22 km.

The system was successfully used to shot down many combat drones of the Saudi-led coalition and the U.S. over the last year. Recently, the Houthis began using the system against fighter jets.

The Houthis growing air-defense capabilities are starting to pose a serious threat to the Saudi-led coalition air power. Earlier this year, the Yemeni group made a major achievement when it shot down a Torido IDS combat aircraft over al-Jawf with an anti-aircraft missile.

Dear brother that what you sayong is going to happen very soon.
Cheers…

Just watch what happens and enjoy the latest photos of Iranian upgraded SU-22M4 testing precision guided Fajr 4 missile. The whole fleet of 36 SU-22 will now be armed with these stand off missiles thanks to the Zionist scum providing the Delilah missiles intact after being shot down in Syria :) 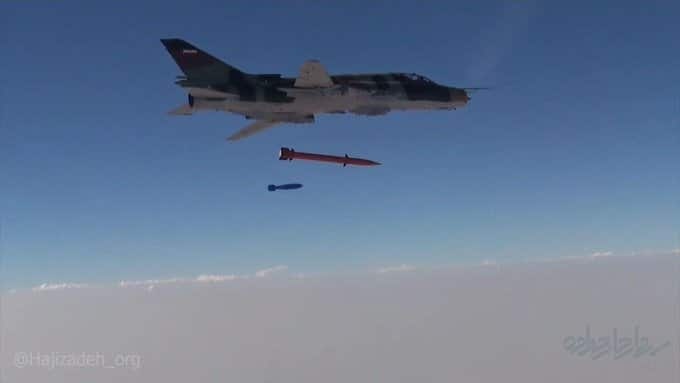 Someone on PDF had said that the Air-launched Farj-4 precision guided missile has been in development for around 6 years and only recently was it shown off to the world.

Given its size, various Iranian strike air-craft (Su-24 Fencer, F-4 Phantoms) can have it loaded onto their hard points.

But what’s most amazing about the Fajr-4 air-launched missile is its 100-200km range, cheap production cost, high-precision, very fast speed and ability to fired off en masse similar to Isreali Delihah, rampage and Popeye saturation attacks. Any fortification under attack from a swarm of these will have their worked cut out for them.

Yes, the primary weapons platform are the upgraded SU-22M4 which are now considered the most lethal versions even according to Russian experts. The warhead has four different configurations with 750 lbs HE to cluster bomblets. The Chinese F-7 Airguard in the interim period, until replaced by J-10 are also being armed with these stand off missiles. The timing is a message to the Americunts, Zionists and particularly the Saudi morons, who are now without their pimp daddy’s protection. The Iranian SU-22 look very good and their payload is devastating. 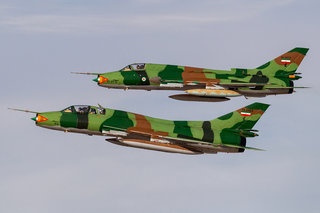 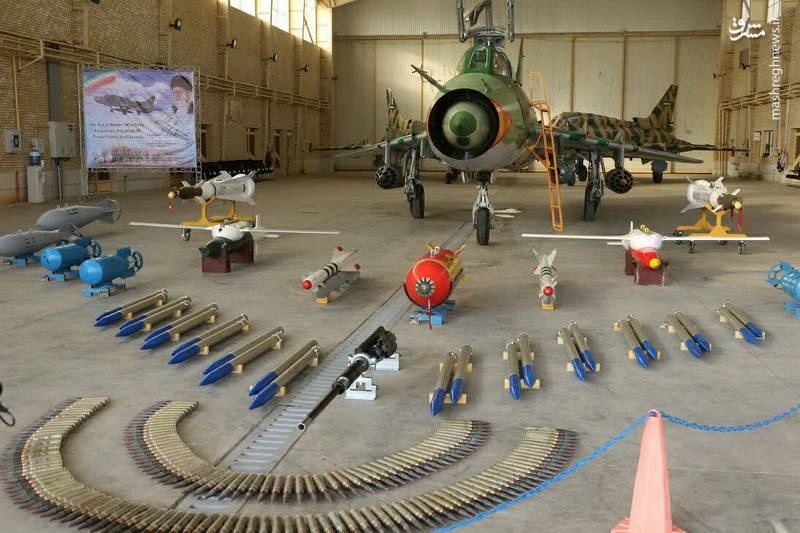 This is actually quite a bomb-shell development all things considered. If Iran is showing this off now, it means they have most likely made a lot of them and they’re already fielded and ready to go which means Iran has an air-launched weapon to accompany the cruise-missiles, Qausi-BMs, BMs and drones when targeting assets.

The sheer diversity and amount of munitions Iran can fire off is growing rapidly year-by-year.

The dumb Zionist gave away thousands of $ of R&D (Delilah missiles) by sheer hubris. Maybe its because the money is in R&D given freely by their Voluntary slaves across the Atlantic. If their little missile-lobbing-PR-game continues, Iranians will end up collecting more and enhancing their capabilities.

Its evident that Iran has developed (and is still developing) very robust offensive capabilities. It has increased the variety from massive ballistic missile, air launched missiles and ATGMs. Anglo-Zio-Nazi terrorists and oil thieves have to think very hard before starting their little adventures like they did in Baghdad or Libya. I think one capability that would increase the effectiveness of Iran and allies (esp.Hebollah, KH) is light modular AD, the Pantisr or Tor type. A type that Hezbollah, KH or IRGC in host countries can have across ME. This would highly limit Zionist adventures especially in Syria.

Good comment Simon. The Zionist cunts are hot air and anyone with half a brain knows that they simply do not have the strategic mass to take on Iran which has a 3,000 year old record of fighting long wars. The Zionist hubris is based on hiding behind the dumbass Americunts, but that is fallacy now as the US is a failed state, even according to their own Jew media. Also US and China will go head to head, sooner than most think. The Zionist bastards have failed to even make a dent in Iranian influence in Syria or region, if anything Iran has gained a lot observing Zionist weapons and tactics. Iranian position is far stronger now than it ever was as all its enemies are collapsing.

Iran seems to have learned the lessons of Libya and Iraq, and Serbia. Defending one’s airspace is that lesson.

But also keep in mind that the three countries that you mention are very small and none has an uninterrupted history of 3,000 years and immense natural and human resources. The Americunts are cowards who hunt in a NATO hyena pack by isolating a small country and then attacking it with 50 plus other wild dogs. Iraq was run by a tyrant unpopular madman, with hardly 22 million people with differing loyalties, and under sanctions for decades. Serbia was part of rump Yugoslavia with barely 7 million people in 1999 and exhausted by fratricide and having no real friends, as Yeltsin was a drunk on CIA payroll. Libya had been attacked by Americunts numerous times previously and had 6 million tribal people and no real military experience. The Iraqis has some AD systems but did not know to to beat electronic jamming systems and kept their radars on, inviting anti-radiation missiles (ARM & HARM). Attacking Iran, a large well defended nationalistic country of 83 million plus is no easy matter and that is reason the Americunts will not attack it directly as they know the consequences, especially now as China is no longer willing to sign on the dotted line at the UNSC. Iran’s first priority now should be to get modern 4th and 5th generation aircraft along with more Chinese AD systems like HQ 7/9/16 etc. Most of these are already compatible with Iranian systems.

why would Iran need the Delila to upgrade their capabilities while they manufacture guided missiles indigenously? they simply took the concept of the air launched ballistic missile like rampage and kinzhal and applied it to missiles already in their arsenal. nothing to do with Delila – by the way Delila is a cruise missile and has nothing to with this Iranian development

All technology is incremental. It is always good to know what your enemies have. The Zionists have proven to be less than paper tigers. Most of their missiles don’t work and now almost 90% are shot down and the frequency of attacks even against Syria is totally down and ineffective. Firing $1 million missiles at sleeping civilian children is not very kosher. If you look at even the damage assessment that SF posts, there is hardly any sign of secondary explosions. The last attack on Homs was a complete disaster as the Chinese BVR long range phased array radars picked up the 8 Popeye and Delilah missiles as soon as they were fired off the Lebanese coast near Tyre. It gave the SAA about 5 minutes to warm up their AD systems and they downed 5 of the 8, the other three hit a residential district killing 3 kids and their parents. But the intel bonanza for Iran and Syria was immense. They have learnt new tactics which I will not go into at this stage.

USE THE PIZZA OVENS FOR A KIKE ROAST!

YA TO GAS THE KIKES!

YOU NEVER LET A SERIOUS CRISIS GO TO WASTE

Rothschild…Queen Elizabeth…Bill Gates of Hell…Wall Street…Banksters…Elites…Create an Economic Crisis through a Bullshit-Flu…so that the Elites can purchase all the Bankrupt Businesses & Homes for pennies on the dollar….Pensioners are screwed because their pension funds will be used to “save” Multinationals…A whole series of Orwellian Measures already have been taken thanks through this 911-False-Flag-Covid-19-Bullshit-Story

I really missed you here HH, but this punk on the left in this show is clearly a Wahhabi.
Quid quid it esta timeo Danaos et dona ferentes.
Stick to that.

Thanks just got the link & had to check…for me it was more about this Dr. Rashid Buttar he’s saying things that made sense….Wahhabis suck…

I just told you, be very careful who you gonna listen to.
Just reap it apart and throw it to garbage.
Because dump belongs there.
As for corona everyone knows that it is CIA Langley produced, just like Satanic cult of Ziowahhabis.

The ‘stick’s for mandatory vaccinations could easily be the forfeit of freedom of travel anywhere and the state control of peoples bank accounts.

This guy whose show is this is clearly a Wahhabi.

Because I can see it and can tell.

All right, Pompeo: What are you seeing, exactly? And what is the tell from that?

Saudi F-15E carry highly advanced ECM jammers and radar warning pods. They can completely fry enemy missile homing heads mid-air causing them to self-destruct before they reach an aircraft. They can also completely jam and blind enemy radars on the ground, preventing them from locking onto an aircraft up to 100 miles away.

“The Fatir-1 system, which was first revealed by the Houthis in August of 2019, is a locally-upgraded Soviet-made SA-6 “Gainful.” The system has an effective range of 22 km.”

This is why the IRGC houthi terrorists have ONLY BEEN ABLE TO SHOOT DOWN 2 SAUDI F-15/Tornados IN OVER 5 YEARS! Over 500 SA-6 launches, and 2 confirmed shootdowns. That’s a 0.004% EFFECTIVE RATE! Ha!

Wait, were those “over 500 SA-6 launches” at fighter craft? Or were they against all aircraft, including UAVs? And what’s your source for all this…?

Seriously, he is a 21 year old fraud and would not know the butt of a jackass from a rifle. He is a paid Zionist hasbara troll and convicted in the US of massive fraud.

For the sake of any non-trolls, this SF article has a link to when a Tornado fighter jet was shot down. Aren’t Tornadoes in the same generation as F-15s?

Tornado was introduced in the 1980’s and F-15 in the 1970’s. The Yemenis have shot down F-15, F-16 (Morocco, Bahrain, Jordan), and Saudi Tornado. The Saudis were sold the latest variants even though they have a very poor history of maintaining or operating any aircraft without western support and mercenaries. Most of the Tornado fleet was rendered inoperable and stripped for parts. Despite paying billions to US, UK and French contractors the Saudi Airforce operational capability is less then 20% as their low sortie rate and poor performance attests to. 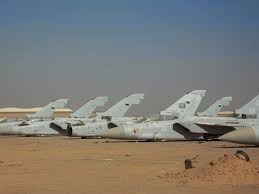 GAS THE KIKES & RIDE A BIKE!

Too bad US and Britain already defeated nazi germany, antisemite!

Really, i thought it was the Russian army who smashed the nazi regime. The US and the UK just followed up the rear. No surprise there.

how do you know they have over 500 launches? is that credible? how many nations have an arsenal of 500 AA missiles?